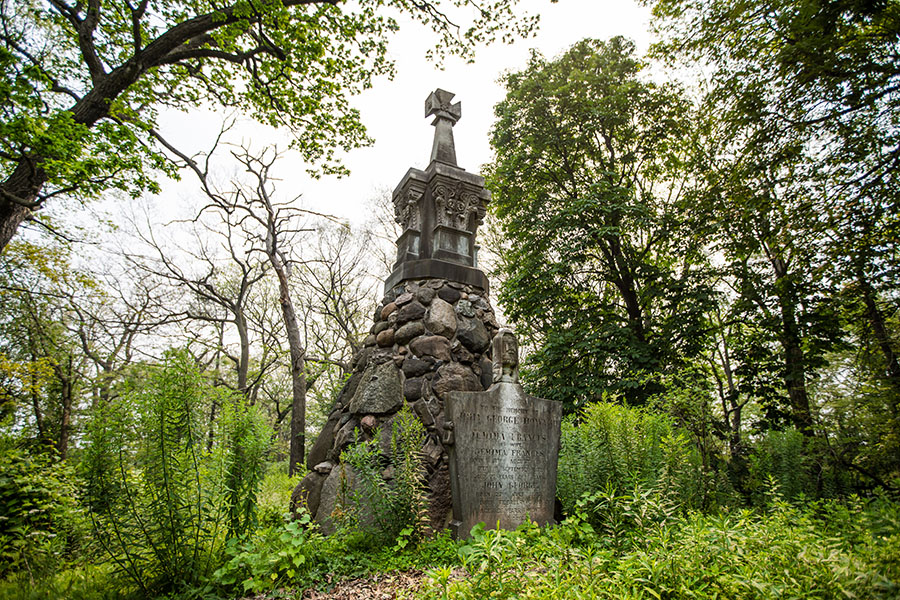 Erected on a reserved section of High Park in anticipation of the death of his ailing wife, Jemima, John Howard’s tomb, aka The Architect’s Tomb, is a popular stop on High Park’s annual haunted Halloween walks. It’s near Colborne Lodge, the Howards’ former country home where, legend has it, the ghost of Jemima still haunts the bedroom where she lived out her last years behind barred windows and a locked door.

Besides its ghostly history, the massive tomb has also come to symbolize one of old Toronto’s most enduring – and tragic – love stories.

The Howards immigrated from England in 1832 after John accepted an appointment as a drawing master at Upper Canada College.

They settled on some 80 hectares of what was supposed to be a sheep farm that stretched from Lake Shore to Bloor Street. It was there that they built their country home known as Colborne Lodge. The Regency-style home was designed by Howard and named after Lieutenant-Governor of Upper Canada John Colborne, who is credited with giving Howard his start in architecture in Canada.

Howard was the city’s first professional architect and official surveyor and civil engineer. He is credited with laying out many of the natural landmarks we recognize today. Among them: Toronto Harbour, Toronto Islands and the Esplanade – the boardwalk envisioned for the waterfront near present-day St. Lawrence Market. He was also an amateur painter of some note, as was Jemima.

Howard would sometimes while away the day painting the natural surroundings of their country estate, while Jemima reportedly favoured romantic themes. Theirs was an outwardly charmed existence. But one can only wonder.

Howard lived a double life. It was apparently known to the townspeople that he kept a mistress, Mary Williams, with whom he fathered three children. Whether that was known to Jemima is unclear, but the couple never had children of their own. In Incidents In The Life Of John G. Howard, a biography based on entries in his journal, their marriage is described as a “singularly happy one.”

Howard’s journal makes no secret of his double life. It includes references to Christmases spent with his other family.

But Howard seems to have come to Upper Canada leaving his own somewhat tortured past behind. He claimed a direct lineage to Thomas Howard, 4th Duke of Norfolk, but he never knew his father. His last name was originally Corby, after the adopted father his mother remarried when John was 18. He changed it to Howard by the time he arrived in Upper Canada. He spent his formative years from the age of 9 to 14 in a boarding school in England. At 15, he was sent to spend two years at sea. He gave that up because of perpetual seasickness, but not before he learned skills like marine surveying and carpentry, which he would later parlay into a three-year articling stint at an architectural firm.

The Howards were among the crème de la crème of Toronto’s gentry. They hosted events at their home, including charity picnics for the town’s poor. Officers from nearby Fort York were invited to fish in Grenadier Pond. Howard would hunt deer and quail on the property. The Howards’ philanthropy and love of nature were well known.

Most of the land that made up their estate would be bequeathed to the city in 1873, with the Howards retaining some 20 hectares including Colborne Lodge. Howard’s gift to the city required that the lands be “retained in their natural state” and that it be named High Park. The city would also pay the Howards an annual pension of $1,200.

But historian David Bain writes that the land was only donated to the city after Howard couldn’t find a buyer. He writes that Howard sometimes harvested timber from the property for his other building projects and that “despite his love of High Park, Howard always viewed it, and all his other scattered land holdings, as investments.”

Howard designed plans for the park inspired by Central Park in New York City, but with more of a focus on retaining the park’s natural surroundings. The Globe reports city fathers visiting the site and pronouncing their satisfaction with Howard’s donation. But the park would remain remote for most Torontonians, sitting west of Dufferin, the city’s westernmost limit at the time. It wouldn’t be till the turn of the century that a streetcar would reach its eastern border. Some who visited the park would lose their way and find themselves on Howard’s property. Howard wrote to the Globe to complain about it. A caretaker hired to help Howard maintain the property had an encounter with what was thought to be an interloper and shot him dead, causing a scandal.

Nevertheless, Howard and Jemima seemed destined to live out their final years peacefully in the park, until Jemima was diagnosed with breast cancer. According to Howard’s journal, the prescription of opioids she was given to numb the pain led to psychotic episodes.

As Kathleen Keefe writes in the article A Cultural History Of High Park, Jemima “began spilling things, breaking things and running away to places where he had a hard time finding her.” Howard inquired about admitting her to the Provincial Lunatic Asylum. He was advised against it by the physician in charge. Apparently acting in the interests of Jemima’s safety – and his peace of mind – Howard hired two nurses to see to it that his wife remain confined to a bedroom in the house outfitted with bars on the windows and no doorknob on the inside. It’s there that Jemima would spend the last years of her life. She died in 1877, more than two years after her tomb was erected. Keefe writes that Howard “seemed to grieve” her loss. But the last years couldn’t have been easy.

Howard would go on to live another 13 years after Jemima’s death. His enduring connection to the park would be formalized in 1878 when he was appointed park ranger.

The tomb erected for his wife would also be Howard’s resting place.

The iron fence that encircles it is more than 300 years old, a remnant of St. Paul’s Cathedral in London, England, designed by Sir Christopher Wren. Howard had commissioned for it to be brought over by ship. But the ship sank in the St. Lawrence. Howard paid divers a small fortune to fish it from the deep, but only a section could be recovered.

Howard’s diary suggests that the plaque on the tomb’s fence was part of the original fence brought over from England, but the city’s archives say “there is no evidence to support the claim.”

There is evidence, however, in Howard’s membership in the Masonic Knights Templar, in the shape of the Maltese Cross that sits atop the tomb. The fraternal order of freemasonry enjoyed a significant presence in Toronto, especially among members of the Family Compact. To be sure, among Howard’s many exploits was the part he played in putting down the Rebellion of 1837 against the compact’s autocratic rule. He led a scouting party up Yonge to attack the rebels who had gathered on December 7, 1837, at Montgomery’s Tavern.