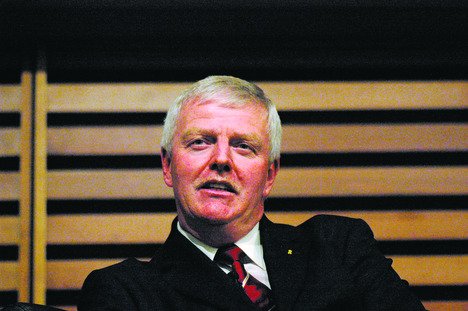 I’m squeezed in shoulder-to- shoulder at the Toronto Reference Library’s swank new Appel Salon on November 19, between a former military surgeon who served in the Soviet Army in Afghanistan in the 80s and a psychiatrist from Latvia who says he used to hate the sight of the peace sign but is now deeply troubled by the war in Afghanistan.

I don’t know these guys. I’m just trying to get a seat near the front for a highly anticipated interview of former chief of defence Rick Hillier, who’s here to flog a much-publicized new book, by Star Ottawa correspondent James Travers.

It’s an older, mostly white crowd who’ve come to fawn over the Don Cherry of the Canadian military establishment. So it’s a standing ovation right off the top when he’s introduced.

But I remain seated, since I’m not a fan of the man famous for saying our mission in Afghanistan is to “kill scumbags.” The two people on either side of me remain seated as well.

It’s a big night for Hillier.

The tale of his rise from humble beginnings on the Rock to the top military gig in the land and commander of the NATO-led International Security Assistance Force is filled with folksy allure.

Coincidentally, it’s telling that this event is mere hours removed from the bomb that whistle-blower Richard Colvin, former deputy head of the Canadian Embassy in Kabul, dropped in Ottawa. Colvin revealed that Afghan authorities routinely tortured detainees handed over by Canadian troops.

Travers gets down to it immediately. What did Hiller know and when did he know it?

Hillier sidesteps. Instead of answering the question, he shifts to the media’s response to Colvin’s testimony. “It looked like a pack of howling dogs,” he says. When in doubt, the safe bet is to kill the messenger.

“I don’t ever even remember meeting him in Afghanistan,” he says, before finally admitting that “we always had concerns about the handovers, but there was no smoking gun that caught my attention. No one articulated any of this to me.”

Travers presses. If the allegations are true, then is Canada complicit in a war crime, as some human rights groups have suggested?

“No, we have a responsible approach,” he says. “My focus was on protecting our soldiers.” And then this sidewinder: “In our Canadian prisons, some people get beat up.”

If prisons guards routinely tortured inmates in Canada, it would be a very serious matter that couldn’t be waved off with a bit of Newfoundland charm.

In one parry after another throughout the evening, Hiller puts his humour to use as he wriggles out of answering questions, at one point quipping that it may be easier to rebuild Afghanistan than the Leafs.

People love it. My neighbours on either side begin shifting in their seats.

While his book is called A Soldier First, Hillier is foremost a politician.

Oh, sure, he says he hates politicians and tells the audience many times that he’s not in the business of patting the government on the back.

Then in the next breath, he’s pumping the current motley crew in charge in Ottawa for “doing a good job.”

I’m not offended, but uncomfortable that someone considered a military icon and Canadian hero so breezily disparages the role of government. It gets a good laugh but underscores a Hillier theme with dangerous undertones: the military would be so much better off if government just got out of the way.

Maybe Hillier’s straight-shooter shtick is designed to take our attention away from his main focus – increasing Canada’s military budget and “climbing out of the decade of darkness in terms of investment,” as he describes it.

Estimates differ as to the total cost of the Afghan war. The government says it will cost just over $11 billion. Canada’s parliamentary budget officer pegged the cost at over $18 billion.

The former Soviet army dude on my left, looking like a rumpled Robin Williams in plaid shirt and dusty boots, lets out a sigh as Hillier limits questions from the audience to three softies.

“I came to Canada after the war thinking Canada was a peacekeeping nation,” he tells me. “But now….” he shrugs and points to the stage that Hillier has just exited to sign books at the back.

He gives his name only as William. He says he doesn’t think Canada will have any more success than the Soviets did in Afghanistan. “But you should treat your soldiers well here.”

The Latvian guy leans in. “He didn’t address the fundamental issue – the morality of this war,” he says. “The Highway of Heroes is really a highway of victims.” We chat for a long while. By the time we decide to leave, we’re the only ones seated.

Hillier’s still selling and signing books at the back. That’s easier than answering the hard questions.