The Prime Minister's Office has released a 37-minute video featuring the PM, the Great One, Wayne Gretzky, and Mr. Hockey,. 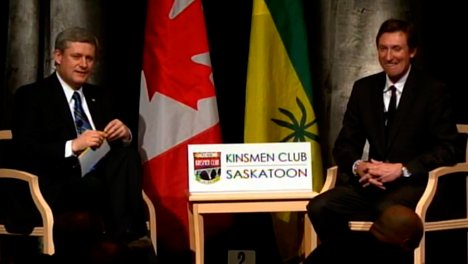 The Prime Minister’s Office has released a 37-minute video featuring the PM, the Great One, Wayne Gretzky, and Mr. Hockey, Gordie Howe, at a celebrity fundraising dinner for the Kinsmen Club of Saskatoon earlier this month.

More than the obvious attempt to score a few political points, the video, which features Harper in the role of interviewer on a stage with Gretz and Howe, offers a glimpse of a side of the PM rarely seen east of the Manitoba border.

See Harp talk up Canada’s favourite pastime. See Harp turn on the good ole boy charm. Who is this guy, legs crossed leaning with one arm on the back of his chair, revealing a little too much paunch under that suit jacket?

The PM seemed to have caught a buzz on the dinnertime wine – or was that beer served with the evening’s repast.

Harper may have grown up in Etobicoke, but his formative years were spent out west. He’s more comfortable in his own skin among westerners. And, in this video, it shows.

The down home appeal is laid on thick, the banter at times resembling a town hall gathering of the fictitious Loyal Order of Water Buffaloes, Yeah, the fraternal order made famous by Fred and Barney. The PM fits right in. And that’s the unnerving part.

Harp seemed to take on that familiar Alfred E. Newman glow at times, the kind that usually comes over him when he’s among friends and thinks no one’s watching.

That’s when he usually says something ill-advised. Happened a lot when he was a fresh-faced Reformer.

But except for a crack about left-wingers, as in, never meeting one that was any good, the PM resisted the urge to get swept away in the moment and drop a bomb or two in the festivities.

Still, there was something a little unnerving about the feel-good event. It looked at times like one of those early Reform party gatherings thanks to a mostly white, mostly male audience.

Don’t want to put to fine a point on that observation. There were a few women among the assembled. The PM made a point of mentioning that off the top.

But while the PM and his handlers are more hip these days to the need to play to the political centre, out west those Reform sensibilities are still very much present in the party’s base.

The dust up last week over Alberta MP Peter Goldring’s musings about Metis leader Louis Riel, he called the native hero a “villain,” is illustrative of that reality.

Some elements of the Conservative party, it seems, are still fighting revisionist wars with our native peoples.

The PMO was careful to distant itself from Goldring’s remarks, made in a pamphlet sent to constituents, entitled The Truth About Louis Riel.

But Harper spokesperson Dimitri Soudas didn’t exactly take issue in the strongest terms ie: there’s no room in our government for people who foment racism, which is what Goldring was doing in the eyes of native observers.

Instead, Soudas said the government “disapproves” of the pamphlet (note, not necessarily Goldring’s remarks therein), soft-pedaling the “villain” part by adding that Riel is a “controversial figure. But he played an important role in the development of Canada and in the protection of rights and culture of the Metis and Francophones in Canada.”

Goldring’s outrage seems to have been prompted by a private member’s bill of Winnipeg MP Pat Martin’s to recognize Riel as a father of Confederation. The Bloc floated a similar bill last summer. What do you think the chances are of any private member’s bill on this subject ever seeing the floor of House while the Tories hold the balance of power?

The answer to that question should tell us what we need to know about where the Tories’ allegiances lie. And no sugar-coated promotional video pushing the PM’s lighter side will change that.[rssbreak]