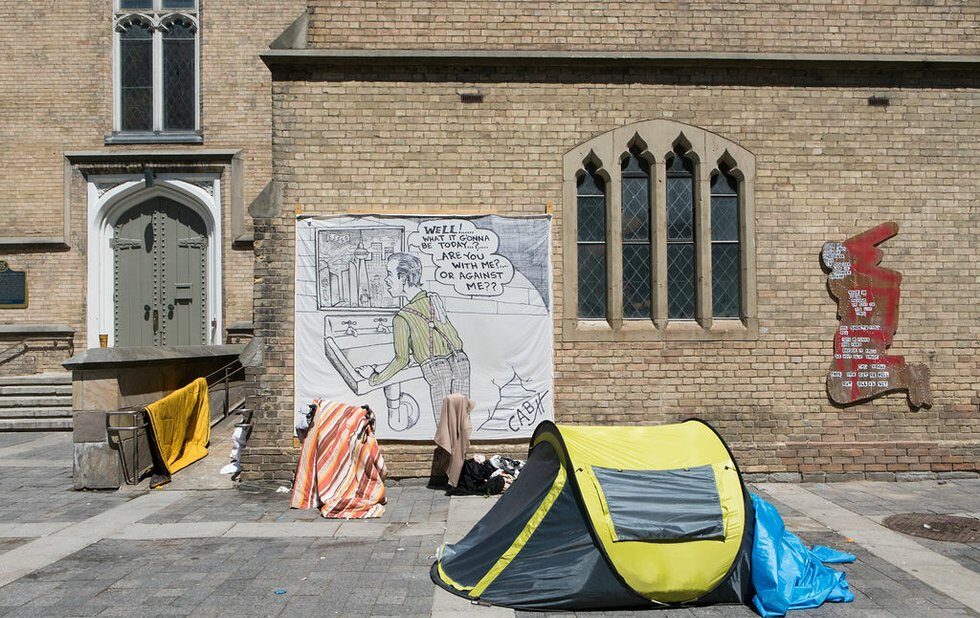 Homelessness advocates are taking the city back to court over health and safety conditions of the shelter system during the coronavirus pandemic.

A coalition of legal organizations has filed a motion in Ontario Superior Court alleging the city is not maintaining two metres distance between shelter beds, still using bunk beds and turning away people in need of shelter.

The motion is scheduled to be heard on July 24.

The city had agreed to specific commitments as part of an interim settlement agreement after the coalition – which includes Sanctuary Ministries of Toronto, Aboriginal Legal Services, the Canadian Civil Liberties Association and HIV & AIDS Legal Clinic Ontario – filed a lawsuit in April.

The suit alleged Toronto’s response to the COVID-19 crisis in the shelter system violated the Charter of Rights and Freedoms and breached the Ontario Human Rights Code.

The two sides reached the interim agreement in mid-May. Under the deal, the city is required to provide “regular, detailed reports” on efforts to maintain physical distancing standards in shelters, respites and overnight drop-ins until it reaches and sustains compliance for two months.

The city was also required “to provide shelter to all shelter system clients by making available such beds as is necessary to achieve physical distancing.”

The agreement covers people who have needed support from the shelter system since March 11, including people who left shelters to live in tents.

In a press release, the advocates said the city told them it reached compliance on June 15.

“The coalition’s enforcement motion raises serious complaints indicating that the City has not in fact reached compliance with its obligations,” the press release states. “The coalition also has concerns with the City’s lack of transparency and refusal to provide basic information about how it has purportedly verified that physical distancing standards have been achieved across all sites in the shelter system.”

“Despite the City’s claims of compliance, the City’s Central Intake line continues on a daily basis to turn away individuals who are entitled to a shelter bed under the settlement agreement,” said Jessica Orkin, a lawyer at Goldblatt Partners representing the coalition, in a statement. “This is not an occasional or unusual occurrence. Hundreds of people remain in encampments or are still sleeping rough due to difficulty finding shelter spaces, and the City’s own data shows that the capacity of the shelter system has declined substantially since the start of the COVID-19 crisis.”

In a statement, a rep for the city said Toronto had reached “100 per cent” physical distancing at all shelter, respite and temporary response sites as of June 15.

“To date, the City has moved over 3,200 homeless clients into 33 new shelter sites as well as interim/permanent housing placements. As of June 15, the City reached 100 per cent physical distancing of two metres between beds in the shelter system, including all 75 existing shelter and respite sites plus the 33 temporary response sites.  A quality assurance team conducts ongoing site visits to verify that physical distancing between beds is being maintained.”

The city statement adds that staff have spent “numerous hours” responding to questions and communications from the applicants and maintains transparency by regularly posting information and statistics online.

“The City looks forward to responding to these allegations on July 24,” the statement concludes.

As of July 5, city data shows there are 25 COVID-19 cases among shelter residents in Toronto and one infected shelter staff member.

To date, a total of 625 positive COVID-19 cases have been linked to shelter outbreaks since the pandemic began, according to the data.