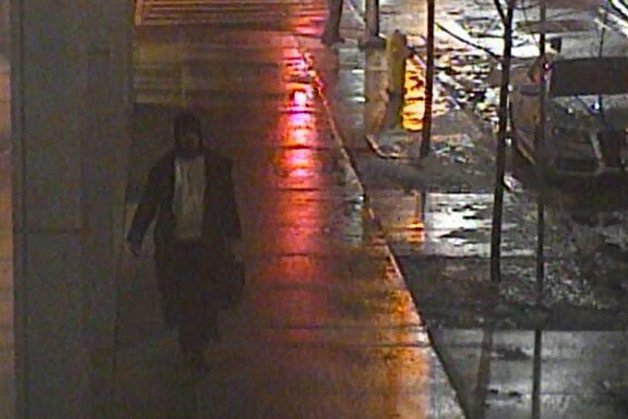 Police photograph of a man sought in connection with a string of downtown sexual assaults on homeless women in 2013.

While the city has moved (some say too reluctantly) to respond to the crisis in a shelter system in which some 770 people can’t find space on any given night, front-line workers say issues of violence and the dangers faced by homeless women remain largely invisible and unaddressed.

On January 31, a month-long investigation released by Health Providers Against Poverty of eight winter respite centres, as well as the two 24-hour drop-ins for women and trans people, revealed that they fail to meet basic living standards set out by the United Nations.

Teya Greenberg is the coordinator of community support and housing at Sistering, one of the 24/7 drop-in centre spaces for women. She says the conversation around homelessness often leaves women out.

“There is this narrative of what homelessness looks like, and it tends to exclude women because the images are all of people sleeping on sidewalk vents, and thosetend to be men,” says Greenberg. “There can be this real backgrounding of the specific issues related to women’s homelessness because it’s not as visible.”

According to the city’s daily shelter census, at least 836 women used shelters and 24/7 drop-in centres on February 4. Despite a city policy to keep overall capacity in the system at 90 per cent, capacity at women’s shelters was at 99 per cent, with only eight spaces to spare.

According to Greenberg, the drop-in is full on a regular basis, with as many as 50 women staying overnight, often on yoga mats on the floor. Women enter a draw daily for a chance to sleep in a reclining chair.

“We have 12 reclining chairs, and other than that women are sleeping on mats on the floor. We have tables and chairs out, so people are sleeping under tables,” said Greenberg. “People are sleeping near our coffee machine, refrigerators – wherever there is space.”

Because of the consistent bed and space shortages, women are resorting to sleeping in unsafe spaces, says long-time street nurse and anti-poverty advocate Cathy Crowe, which is why 24/7 services like Sistering and Fred Victor were created in the first place.

“Both women’s overnight drop-in centres came about following months and months of protest after a number of incidents where women were assaulted on the street,” says Crowe.

In 2013, a woman was sexually assaulted twice in one night by two different men on the front steps of housing agency Street Health. At the time there were no low-barrier, 24/7 centres for women in the city.

Those on the front lines are all too familiar with stories of sexual assault involving homeless women. While exact numbers are difficult to come by, a survey of 368 homeless adults conducted by Street Health at shelters and meal programs in 2007 revealed that one in five homeless women had been raped or sexuallyassaulted – half of them reported being assaulted more than once. Three of the respondents said they had been sexually assaulted or raped by police officers.

Greenberg says homeless women put their safety in jeopardy when no beds are available, or when they are not able to get into the structured shelter system, sometimes trading sex for a bed or staying in violent situations.

“We hear lots of stories of women living in rooming houses without a lock on their door,” she says.

Sistering deals with some of the most marginalized women, including racialized women, sex workers, women struggling with substance abuse and women with mental health issues.

Greenberg says while the city needs to provide more shelter beds, shelter space is not a solution to the current crisis: more housing is. But it’s becoming increasingly difficult to find housing for their clients because livable spaces that used to be accessible are now in a highly competitive market that includes studentsand middle-income tenants.

“The women we work with just get absolutely out-competed for any kind of standard living space. The standards get lower and lower and lower in terms of whatpeople have access to just to be inside.”

Sojie Tate, communications and human resources manager for Women’s Habitat in Etobicoke, a shelter for women and children escaping violence, says she’s seen a consistent rise in the length of time women spend in her shelter, due to a lack of housing.

“Ten years ago, women would stay at a shelter for maybe six months,” says Tate. Now it’s up to a year.

Sharlene Tygesen, executive director of Ernestine’s Women’s Shelter, says there is no disputing the fact that immediate action is needed.

“We need people at City Hall to come forward and say, ‘We’re going to put money in the housing system,’” she says.

While the city has been more proactive lately in the face of mounting public pressure to open more shelter spaces, including armouries during extreme cold weatherwarnings, Greenberg says the city needs to address the issue of shelter crowding and the need for housing at the same time.