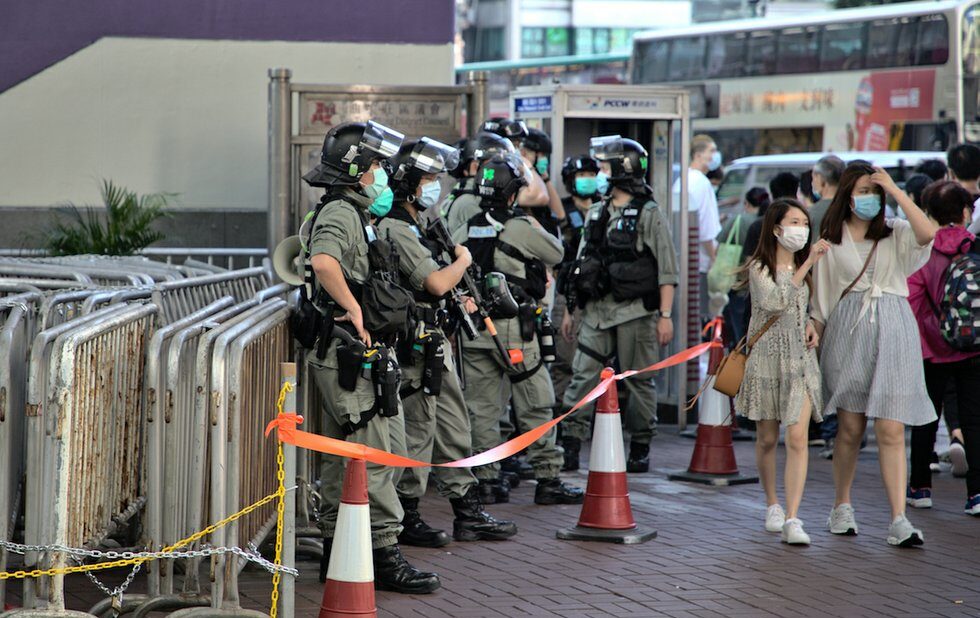 On May 7, Hogan Lam heard that the Hong Kong Police Force (HKPF) had posted a job listing on McMaster University’s careers services website. The fourth-year arts student at the University of Toronto wondered if similar postings were up at his school.

Lam found a posting listing 50 police inspector positions with the Hong Kong police the next day.

He was also disappointed University of Toronto officials refused to take it down, despite his repeated requests.

Hong Kong-Canadian activists argue the postings legitimize an organization that has been widely criticized by human rights groups, including Amnesty International, over the treatment of protestors during ongoing mass demonstrations.

More than 30 Hong Kong pro-democracy groups in Canada have signed an open letter urging all Canadian post-secondary schools to take down the postings, arguing they signal support for an organization that has violated international human rights.

In September, Amnesty International Canada criticized the HKPF for its use of force and torture in police detention during pro-democracy street protests that have gripped Hong Kong for the past 14 months.

In a statement to NOW, McMaster University said that it removed the posting shortly after it appeared.

“McMaster reviews postings regularly and makes determinations at its discretion based on a wide range of factors that may impact student employment,” a rep for the school wrote in an email.

Lam and other concerned students emailed U of T’s Career Exploration and Education Office to request the listing be taken down.

However, assistant director of U of T‘s career services Lily Abediny responded that the school’s Career and Co-Curricular Learning Network “are governed by federal and provincial guidelines, as well as the University of Toronto policies.

“We welcome employers from all industries to post positions as long as their practices do not contradict these guidelines and policies,” Abediny wrote.

A U of T alumnus, who asked to remain anonymous for fear of prejudice from his employer, also complained to the school.

“Please be assured that the Provost’s Office has reviewed this posting and consultation has occurred with our tri-campus career services partners,” Abediny replied in an email. “This employer and job posting adhere to our employer recruitment and engagement protocols.”

Lam notes that U of T’s career services state that employer guidelines are governed in part by “Government of Canada Human Rights,” which includes freedom of expression and peaceful assembly as fundamental freedoms.

At first, Vincent Wong, adjunct professor and research associate at U of T’s law faculty, did not condemn the postings – then he read the school’s official response.

“I was really disappointed that they would gaslight students, staff and alumni by doubling down on the position that this didn’t violate U of T policy,” Wong said. “[The office] could be saying that the severity of [HKPF]’s human rights abuses does not meet the standard for us to take it down. Or this is completely a bad faith argument.

“As a human rights lawyer that has done so much work facilitating events and discussions [at U of T], it just felt like a personal slap in the face,” Wong said. “It is a disgrace.”

In a statement to NOW, a U of T spokesperson said, “The University encourages all students to look at their own interests and values as they make career decisions about which positions to pursue.”

HKPF has recruited at several universities in Canada. A member for the force’s public relations branch wrote in an email to NOW that overseas recruitment is part of a “proactive recruitment strategy to attract high-calibre candidates who possess the required competencies.”

HKPF recruits both in Hong Kong and overseas every year, the rep added.

“Outreaching to university graduates in Hong Kong and overseas has always been one of the proactive strategies,” the duty officer said. “The Force will regularly review the recruitment strategy in light of the prevailing situation.”

Meanwhile, the number of police abandoning their careers, before retirement or “leaving as expected,” jumped 40 per cent.

Jeremy Wilson, a criminal justice professor at Michigan State University, is an expert on police administration and staffing. He describes growing defections from the police, dwindling desire to join the force, and a shrinking pool of qualified recruits as factors contributing to a police staffing crunch – or what he calls “police attrition” – in the United States.

“It’s not surprising that an agency would go out of its jurisdiction,” he said. “But halfway across the world? I just haven’t seen that.

“It suggests that agencies are trying really hard. Ideally, they’d prefer to recruit locally,” he added. “My guess is that’s probably one strategy out of many that they’re trying, but I would be surprised if they were getting a large number [of applicants].”

He attributes the shrinking pool of police recruits in the U.S. to legitimacy crises and generational preferences – younger people are more likely to job hop. “These issues would likely resonate in other parts of the world too,” Wilson said.

“In mainland China, rotations are used heavily – especially at higher levels – to reduce corruption,” Scoggins wrote in an email. “As a former British colony, though, the practice of recruiting police from outside of Hong Kong used to be commonplace.”

The “police inspector” position listed at U of T is a position that commands a unit and would manage and supervise a team of police officers.

For Wong, the fact that more than 30 organizations across Canada have signed the joint statement to stop HKPF recruitment in Canada is a testimony to how students – and community members – refuse to let schools off the hook.

“We will just keep escalating it until the costs for U of T are too high to keep these job postings up,” he said.

Lam calls the way the university closed their response to him “patronizing”: “We admire your dedication to social justice and encourage you to continue seeking opportunity for advocacy.”

“They’re not really taking our response seriously,” Lam said. “I don’t know why U of T is just being so stubborn.”