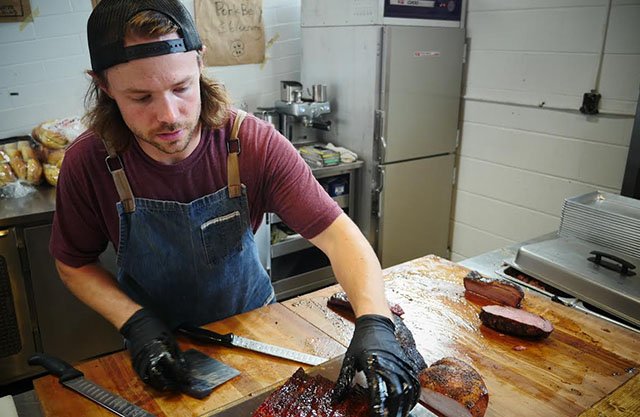 Adam Skelly in a previous life before he became the face of the anti-lockdown cause.

Just when it looked like we’d heard the last of Adam Skelly, the owner of Adamson Barbecue made famous for defying Ontario’s lockdown orders, there he was back in the news last week.

Turns out the city has sent him a bill for around $180K for services related to the shutdown of his restaurant back in November. Those services include some $165K in policing costs as well as the costs of boarding up – and keeping closed – his place of business after police and bylaw enforcement officers showed up to enforce the provincial lockdown order.

Skelly was led away in handcuffs back then as police scuffled with anti-mask and anti-lockdown protestors who converged on this south Etobicoke restaurant. Skelly has since launched a constitutional challenge against the Reopening Ontario Act, buoyed by donations to pay for his legal fees through a GoFundMe campaign.

His shop in Etobicoke remains closed “under illegal occupation by Eileen DeVilla!,” Toronto’s medical officer of health, Skelly proclaims on his website. But a second location in Leaside continues to offer home delivery on weekends. Skelly says the location can no longer operate as a takeout restaurant because of what he describes as an “old zoning issue tied up in beaurocratic [sic] process.” It may be more accurate to say he was operating without a licence. A third location in the 905 in Aurora is offering lunch and pre-order pick-ups.

City spokesperson Brad Ross tells NOW on the city’s move to collect costs related to Adamson’s shutdown that “Enforcement action was necessary to protect public health from it being open.”

That much seems clear to most, except Skelly. But the Canadian Civil Liberties Association has weighed in suggesting that ordering Skelly to pay policing costs may raise constitutional issues over Skelly’s right to protest provincial lockdown measures.

Cara Zwibel, director of the CCLA’s fundamental freedoms program, told CTV News last week that enforcing the law should be considered part of the cost of doing business for the city.

That argument may be a little more difficult to make in Skelly’s case, who defied orders to close for three days before he was arrested on criminal trespassing charges – and, it turns out, was operating his business without a licence.

The city, however, seems prepared to make an example of Skelly. It says it’s prepared to fight for the costs in court if Skelly refuses to pay up.

Don’t count on that happening now that Skelly has become a martyr for the anti-lockdown cause.

In retrospect, the city has no one to blame but itself. The effort to close Skelly down was botched from the start. First, the guys sent in to change the locks on his place seemed to not be aware there was a side door. Then someone made the decision to send cops in on horseback to keep supporters and protestors outside his joint.

It would have been more prudent for the city to bide its time and move in when things had quieted down. Instead, Mayor John Tory set a confrontational tone by suggesting city bylaw enforcement and police should “throw the book” at Skelly. That hasn’t helped matters.

Skelly has played the role of working-class hero in trademark hoodie, lumberjack jacket and camo cap to a T. It’s attracted a lot of sympathy to his cause, when he’s clearly spent too much time on the internet indulging in conspiracy theories about the coronavirus.

“There seems to be a larger globalist agenda at play,” he has said about the pandemic. “There’s no real answers there’s only blind faith and obedience… to this alleged pandemic.”

He goes further suggesting that federal “subsidies” to media companies are feeding a false narrative on the coronavirus.

Even before he became famous, Skelly was fanning the flames about the pandemic on his business’s social media accounts. He was later forced to apologize for labelling as “retards” those questioning his conspiracy theories.

To be sure, disparate groups have been attracted to his cause, most visibly The Line Canada, “a national movement of resistance… to end corruption and tyranny.”

Skelly has claimed he never wanted to be the poster boy for the anti-lockdown cabal, but he hasn’t been shy about drawing attention to himself or his views of the science of COVID-19. Other observers have already suggested his act of defiance is part publicity stunt – his set-to with the city has already inspired a merchandising spree of Risk It For The Brisket hoodies, jackets and caps.

Also, the bill the city wants him to pay was sent to him last December. He only made that public last weekend. It’s the same weekend that he posted a video on his Instagram account of what looked like his restaurant up in flames.

“My business after challenging the establishment narrative” were the words posted along with the video, leaving the impression that someone had taken a torch to his place. Only, it wasn’t his restaurant that was up in flames but another nearby. That fact seemed lost on many of the 482 commenters that the post attracted. Skelly had to explain that it was a meme.

Meanwhile, the press conference announcing his constitutional challenge a few weeks back has received more than 420,000 page views on something called Bright Light News on Facebook, although most mainstream news organizations chose to ignore it. But the money to support that challenge from a GoFundMe campaign keeps coming in, reaching more than $337,000 as of this week.

To some that would seem obscene for someone whose business was seemingly holding up with delivery services during the pandemic – Skelly says he paid out $1 million in payroll last year – when other businesses were being forced to close under the lockdown.

More than 17,000 people have signed a petition on change.org asking GoFundMe “to re-evaluate what its platform should and should not be used for” and to remove the fundraiser on behalf of Skelly.

As the petition succinctly points out, “Whether you agree with these [provincial] mandates or not, he is putting the lives of others at risk.” And there’s the crux of the matter.

Skelly, of course, has denied he’s putting anyone at risk. He says that no one he knows of who took part in protests at his Etobicoke location or was served at his restaurant has contracted the virus. But the pizza joint sharing the space at Skelly’s Leaside location, Conspiracy Pizza, could not offer the same assurance to its staff and customers, closing down its operations shortly after the controversy broke last December.

Too bad that for the city and police the controversy is turning into a PR exercise.