How high is too high in High Park? 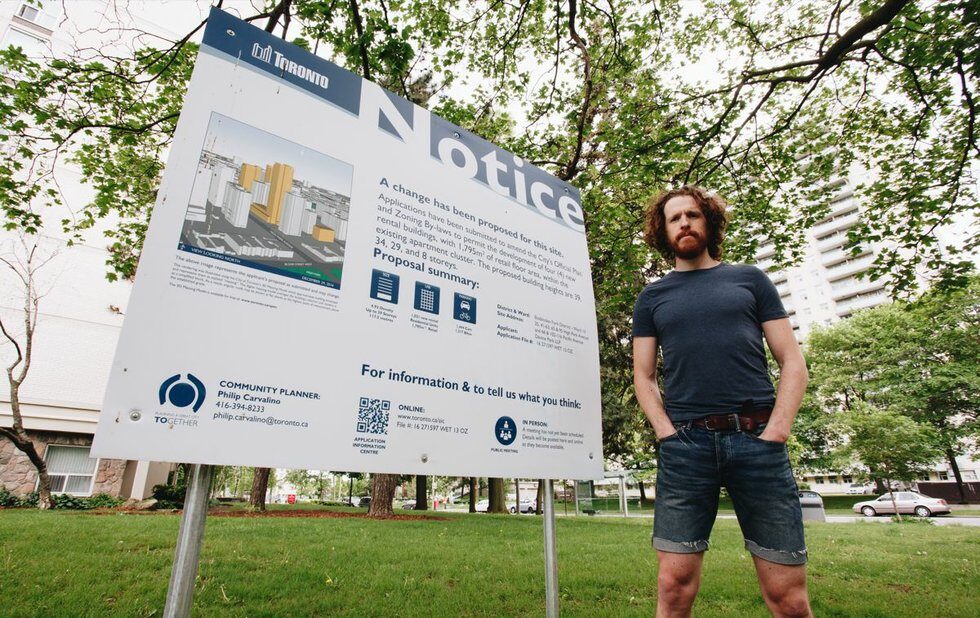 Doug Howat says community opposition to development is keeping young people like him from living in desirable areas.

In the High Park neighbourhood, two subway stops are within a 10-minute walk of each other, and the city’s largest green space beckons. “Only Bloor Street separates you from forests and hiking trails, grassy expanses and quiet brooks,” gushed a recent condo magazine article. Who wouldn’t want to live here?

But with desirability comes development, and High Park is beginning to see its fill. The city is currently considering two large-scale developments on adjacent blocks just north of Bloor West.

The first, by the Minto Group, would add two apartment towers of 33 and 29 storeys, an eight-storey mid-rise and 37 three-storey townhouses among three existing Minto-owned apartment towers between Pacific and Oakmount.

Immediately west, between Pacific and High Park Avenue, GWL Realty Advisors wants to add three rental towers of 39, 34 and 29 storeys and an eight-storey mid-rise to a block that already includes four large rental buildings. All but four units in the existing towers would be maintained, but 20 two-storey townhouses on the site would be demolished. The proposal also includes 1,795 square metres (on two floors) of retail, the first to emerge on High Park Avenue.

If approved as proposed, the developments would add 768 and 1,031 new rental units respectively to the area, more than doubling the number of units on the two sites.

While much-needed affordable housing is not currently part of either proposal, new purpose-built rental housing is. The units would help fill a growing need for rental housing in the city, where the vacancy rate fell to 1.3 per cent last year.

The proposed towers will rise considerably above the existing 12- to 26-storey buildings, which has many residents, and local Councillor Sarah Doucette, saying it’s too much height and density too fast.

Hundreds of angry residents showed up at the first two community consultations May 8 and 18 to discuss the proposals, and they aren’t buying what the developers are selling. “Say no to double density” T-shirts were offered for sale. 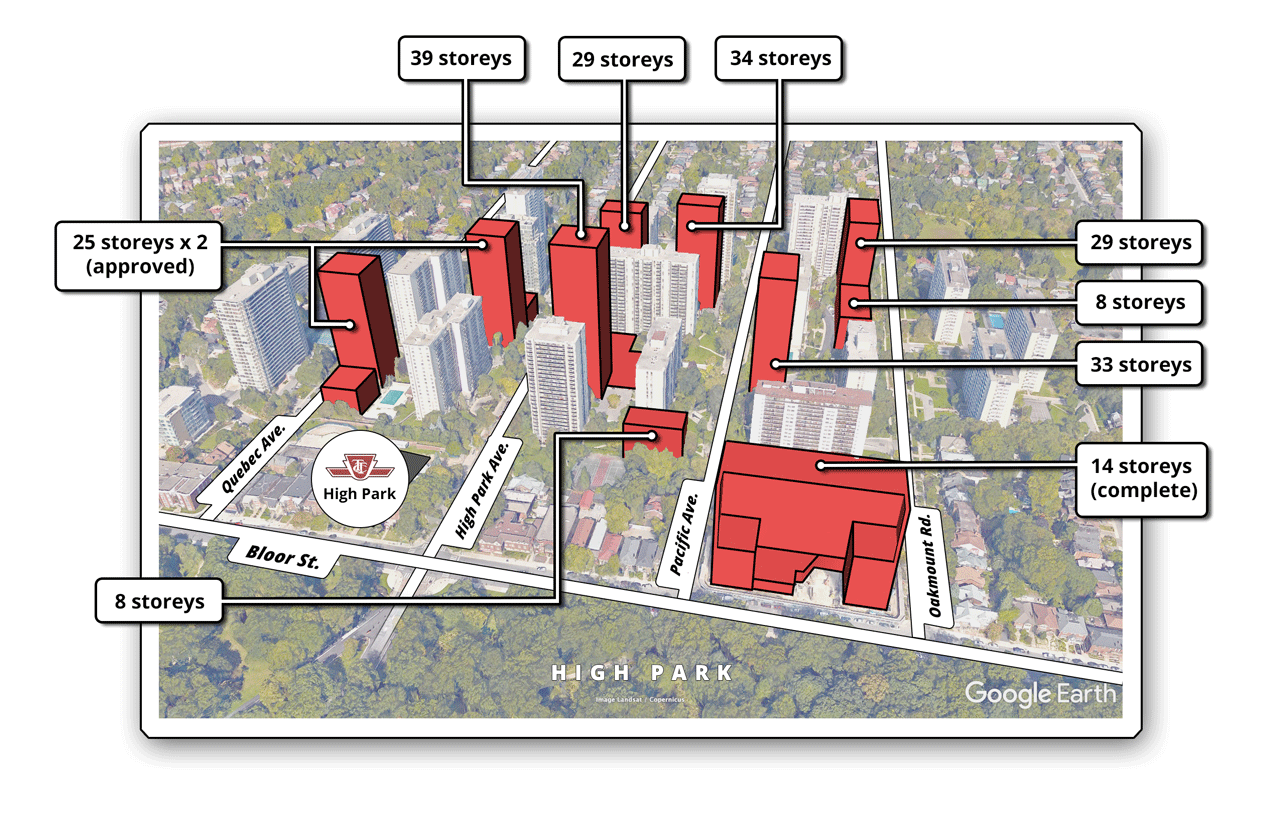 It’s not the first time the area has undergone significant change.

But a handful of condo developments that have already gone up in the area are stoking resistance for locals.

The Daniels Corporation added a 14-storey, 378-unit condominium to the Pacific-Oakmount block in 2015. North Drive’s 108-unit, 11-storey condo, closer to the northwest corner of the park, is about to be occupied. And GWL’s Grenadier Square redevelopment of Quebec and High Park Avenue townhouses into two 25-storey rental towers (adding 530 new units to another tower-in-the-park complex) is currently under way. The latter was a city-supported application eventually approved by the Ontario Municipal Board (OMB).

The two sites that Minto and GWL are proposing to redevelop for rental housing are typical of the “tower in the park” urban planning approach popular in Toronto in the 60s and 70s. As the name suggests, the modernist trend encouraged high-rises surrounded by open green spaces rather than single-family housing. The idea was to build up, not out, to control urban sprawl.

Today the zones between towers – often neglected, underused and not open to the public – are seen as wasteful spaces that could be resources for the intensification necessary in a rapidly growing city.

While some residents report having to let several packed trains pass before boarding the subway in rush hour to illustrate growing density in the neighbourhood, Toronto Transit Commission data show that High Park is the fifth-least-utilized station on the Bloor-Danforth line.

Doug Howat, who grew up in the city and lives “just feet” from one of the contentious sites, welcomes the development and expresses frustration that community opposition is keeping young people like him from living in desirable areas. To him, one person’s fight for quality of life is another’s NIMBYism.

“If you own a home in High Park, you’re a millionaire,” he says. “They’re millionaires fighting to keep what they have.”

As for fears of increased density raised by other residents, he says, “The sidewalks are barren in this neighbourhood.”

Robert Glover, a partner with Bousfields (a planning firm consulting on both proposals) and a former director of urban design for the city, told residents at the first community consultation that the 50-year-old sites have “developed a middle-aged character. They need some exercise” to rejuvenate them for the next 50 years.

The open spaces would be improved, for example, by walkways that encourage public movement through the development.

Says city senior planner Philip Carvalino, “Do we encourage growth? No. But can we permit growth? The test is compatible infill.”

Carvalino acknowledges that planning staff have identified “numerous and significant outstanding issues” with both the Minto and GWL proposals – he’s received “600 or so emails” from residents about increased density and decreased quality of life. He assures that the city will rely on a raft of policies and guidelines and the expertise of staff and applicants’ consultants “who have it down to a science – their methodologies do work,” and will consider residents’ concerns while upholding good planning principles.

But the High Park Community Alliance, organized to oppose what it calls “unmanageable” development, is fundraising to hire its own team of consultants in case the proposals go to the OMB, whose powers the province has recently moved to limit. As alliance member Marc Senderowitz, coincidentally a lawyer, says, “In this area of law, there is no certainty. It’s all arguable.”

Besides density issues, residents have also voiced concerns about crowded schools. While a decade of declining enrolment has resulted in closures elsewhere in the city, Ward 13’s high birth rate means some local schools are accommodating more students than intended. Keele Street Junior Public School, for example, was built for 257 students in junior kindergarten to Grade 8 but had 397 enrolled in 2014.

As Doucette explains, the Toronto District School Board doesn’t know what the schools’ capacity will be by the time these developments would be finished. Carvalino says those moving into the developments will have to be told they may have to bus their children to schools outside the area.

In the meantime, Carvalino hopes to have school board representation on a working group to hash out what compatible infill would look like. The planning department has also recommended that staff initiate an area-based character study (excluding the lands fronting Bloor, already included in a Bloor West Village Avenue Study now under way) to consider appropriate infill “holistically.” Study results and a final staff report on the proposals are expected by spring next year.

Downtown has absorbed some 30,000 new residents in recent years and is still growing four times as fast as the rest of the city. Toronto’s population is expected to rise from 2.83 million in 2015 to 3.74 million in 2041. Those people will need somewhere to live – if not in this backyard, then where?

As one resident stated at the consultations, “Maybe we have to compromise.”