Ontario Human Rights Commission's follow-up to its 2018 report reveals that Black people are more likely to be arrested, charged or killed by Toronto police 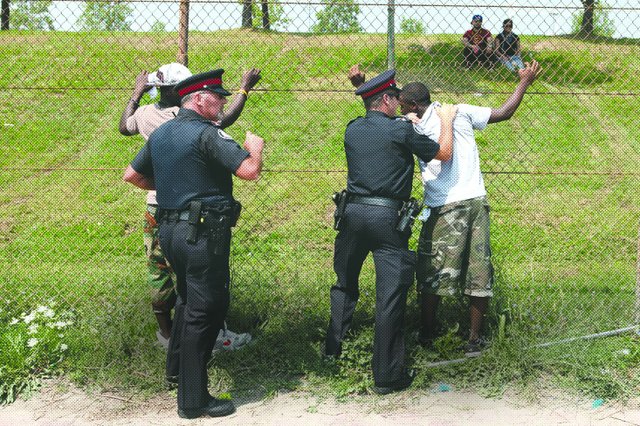 The Ontario Human Rights Commission released its second interim report on its inquiry into racial profiling and discrimination on the Toronto police force on Monday.

Its executive summary puts it bluntly. Black people are more likely to be arrested charged and over-charged, struck, shot or killed by the Toronto police.

“No one should be shocked”

The follow-up to the OHRC’s first interim report in 2018 reveals what Black communities have been saying for decades about their treatment at the hands of police, says Anthony Morgan, head of the city’s anti-Black racism unit.

“No one should be shocked,” he says. “These reports repackage what the Black community has been saying since 1978 and the police shooting death of Buddy Evans.”

Morgan spoke at the press conference called by the OHRC to release its report.

He laid out a brief history of all the reports calling out anti-Black racism written since Evans’ death.

They include the 1988 report by the race relations task force that led to the creation of the Police Services Act; the 1995 report into systemic racism in the justice system; and, most recently, Justice Michael Tulloch’s 2017 report into police oversight in Ontario

But Morgan says it’s up to politicians, judges, parole officers and other people in power to make policy changes.

The OHRC’s first report focused on lethal use of force by Toronto police.

Criminologist Scot Wortley analyzed the Toronto Police Service’s own arrest and charge data from 2013 to 2017 to compile the report. He describes the findings as “highly disturbing.”

One-quarter (25 per cent) of all serious cases investigated by the province’s Special Investigations Unit involve Black people. Yet Black people make up 8.8 per cent of Toronto’s population.

Members of Toronto’s Black communities are over-represented in shootings (36 per cent), deadly encounters (61.5 per cent), and shooting deaths (70 per cent) involving police.

Four in 10 cases of lower-level use of force involve Black people.

Police are more likely to target Black people for “proactive policing” – where an officer has decided to stop and question someone.

Half of all charges laid by police against Black people were withdrawn. And only one-fifth of police charges resulted in a conviction.

Wortley shot down the notion that guns and gangs are at the root of most police-involved use of force incidents. Most of the use of force cases he analyzed, he says, involved unarmed civilians with no police record.

The OHRC’s interim chief commissioner Ena Chadha says the data challenges the notion that police discrimination here is not as bad as in the United States.

“We have to stop perpetuating this myth,” Chadha says.

“The time has come to change law enforcement institutions.”

In a joint statement, TPS and TPSB seemed to agree.

They replied that “the Board and Service view the report, and the inquiry, as being vitally important to our continued efforts to critically examine and act to address anti-Black racism.”

And “recognize that the report’s conclusions demand reform and aggressive action.”

The statement lists what it describes as “initial, concrete steps towards reform” taken since the OHRC’s first report. Noted is the creation of an “Equity, Inclusion and Human Rights Unit” and expanded anti-Black racism training for police officers.

Wortley looked at whether other factors could explain the disproportionate numbers. Like the idea that more Black people live in highly-policed areas.

But Wortley says that the bias demonstrated by police was mostly conscious.

“Ultimately, a person’s race remained a significant predictor of whether an officer would use force,” the report says.