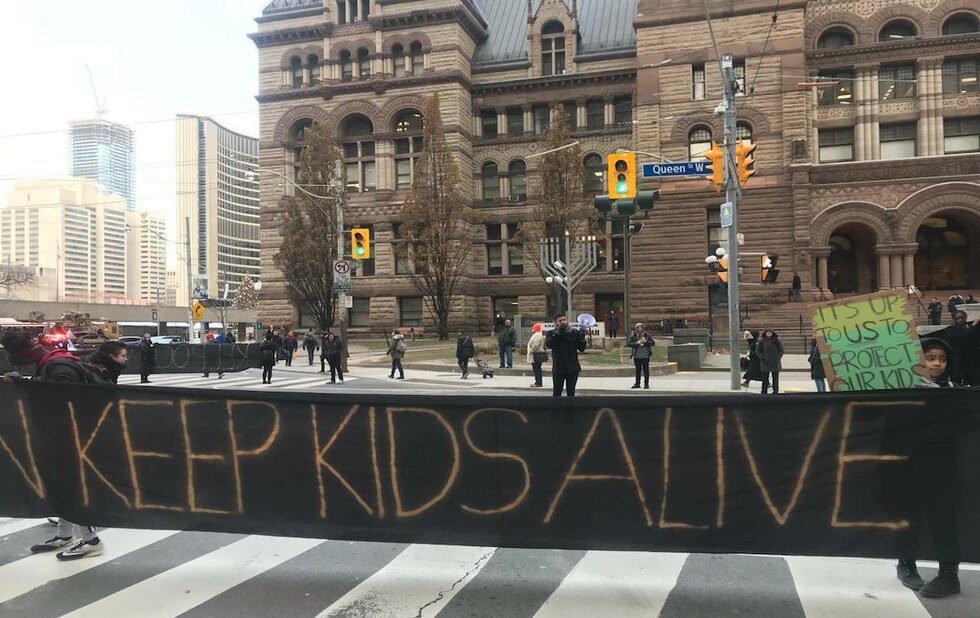 A group of former Crown wards organized a blockade of Queen and Bay last week to call for systemic changes in Ontario's child protection system.

Amid ongoing public outrage, the Ford government’s Bill 57, the Restoring Trust, Transparency and Accountability Act, passed third reading last week. This bill will eliminate a number of offices charged with the oversight of government agencies, including the office of the Ontario Child Advocate which oversees the operation of children’s aid societies across the province.

Much has been revealed about the disproportionate number of African-Canadian and Indigenous youth in the care of the Children’s Aid Society of Toronto (CAST). Earlier this year, an Ontario Human Rights Commission inquiry found that African-Canadian children and youth made up 32 per cent of those admitted into the care of CAST in 2017. In Ontario, Indigenous youth make up 23 per cent of children in care.

Many in these communities are familiar with present and former Crown wards, survivors of child welfare, or parents who have interacted with CAST. Too often, families from marginalized communities share stories of discrimination in their interactions with frontline workers.

This summer, CAST came under fire from child welfare workers and staff over the appointment of a new CEO with seemingly little experience in child protection sector. Given the evolving scrutiny placed on the agency, critics charged that the appointment of Paul Rosebush, former CEO of South Bruce Grey Health Centre, was a missed opportunity for meaningful change at the highest level.

Frontline workers, advocates, and former Crown wards recently launched a social media campaign #ExposeCAST with the aim of shining light on equity issues and racism they say they have encountered first-hand within the agency.

The stories include accounts from workers of colour who have been systematically pushed out, overlooked for supervisory or managerial positions, or who regularly experience scrutiny over their work performance. The say there exists a lack of urgency when it comes to addressing the racism they and the families they serve face.

I represent one of these workers, Sylvia Delgado, who has launched an Ontario Human Rights legal challenge against CAST. Delgado says her attempts to raise concerns about CAST’s treatment of workers and families has been met with discipline.

Her story is echoed by other workers who have shared their stories with me.

They say some supervisors hire staff without adequate training to engage with marginalized communities, which may result in unnecessarily intrusive measures, such as police intervention and the apprehension of children.

These situations are often exacerbated by management, who themselves may lack anti-racism training. Both the data and anecdotal claims point to systemic racism as a sector-wide issue.

In response to the growing criticism, the agency launched One Vision One Voice, an initiative aimed at addressing the over-representation of Black children and youth in the system. This is a necessary intervention, but simply not enough. CAST seems focused on addressing the issues symptomatically, rather than taking an institution-wide approach.

Last week, a group of former Crown wards organized a blockade of Queen and Bay calling for, among many things, systemic changes within children’s aid societies. We must all continue to encourage those working within the system to tell their stories as well as empower those who have the power to do so to steer CAST in the right direction. Without sector-wide transformation, expect more to take action.

Saron Gebresellassi is a human rights lawyer and former candidate for Toronto mayor.