I resolve to…give myself a royal flush

No fruitcake for this fruitcake. While most of you were stuffing yourselves sick with turkey and shortbread and nog, NOW's. 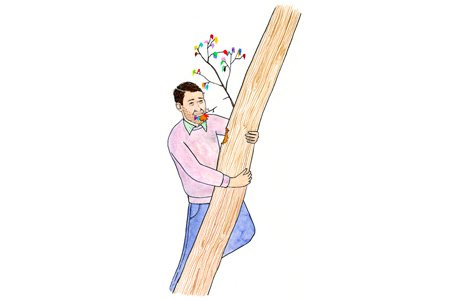 No fruitcake for this fruitcake. While most of you were stuffing yourselves sick with turkey and shortbread and nog, NOW’s restaurant critic has been purging his body of toxins following the instructions of Natasha Kyssa’s recently published SimplyRaw Living Foods Detox Manual (Arsenal Pulp Press, $19.95 simplyraw.ca).

I eat a lot of crap in my line of work. One week I’ll binge on burgers, the next ice cream and the following smoked meat. Then it’s non-stop Ethiopian. The mere mention of Caribana and its industrial-strength jerk chicken makes me break me out in a sweat.

I’ve learned to moderate my over-indulgence with a macrobiotic counter-diet of brown rice and steamed broccoli. Kyssa’s raw regime goes one step further by eliminating not only all processed and refined foods, but the cooked ones as well.

“Living foods are high in enzymes that assist your body to digest food and absorb nutrients into the bloodstream,” writes the 48-year-old Ottawa chef and model. “These nutrient-rich foods increase energy, assist healing, rebuild healthy tissue and invigorate the entire body.”

So it’s goodbye meat, dairy, sugar, caffeine, nicotine, alcohol and tap water and hello organic wheat grass, spirulina and sprouts. My day now starts with the first of many Mason jars of purified water, followed an hour later by a glass of Firewater (hot purified water, lemon juice and cayenne). A half hour after that, I down a bowl of raw almonds that have been soaked in purified water overnight to maximize their digestibility.

I’ve never been a breakfast person – except for the occasional half a vegan muffin from Urban Herbivore – and don’t drink coffee or tea. But now I’m the Energizer Bunny.

By mid-morning, I’m whipping up a chlorophyll-rich glass of cucumber and celery juice, then fashioning lunch from a banana wrapped in a leaf of romaine lettuce spread with raw almond butter. Not exactly Elvis’s peanut butter, banana and bacon sandwich, but it sure cleans out your pipes.

For dinner, I inhale a Waldorf salad (chopped apples and celery tossed with raisins and raw walnuts in a lemon juice and olive oil vinaigrette) with faux pasta made from zucchini tossed with garlicky basil pesto and topped with a marinara of sun-dried tomatoes, fresh chopped tomatoes and raw, unpasteurized Nama Shoyu soy sauce. Soaked raw cashews approximate Parmesan. (Read the recipe here.) I could easily eat this every day and never be hungry.

Sure, I still crave double-fudge sundaes – and a couple of bottles of champagne – but, two weeks in, I’m feeling unusually revived, not to mention 5 pounds lighter.

Obviously, my duties as a professional eater will require me to eat more than just raw foods in the future. Otherwise, I’d just be reviewing salads. But now that I’m recharged, I’m ready to tackle whatever gets thrown on my plate.

Bring on the poutine!