By Valerie Scott on behalf of Sex Professionals of Canada 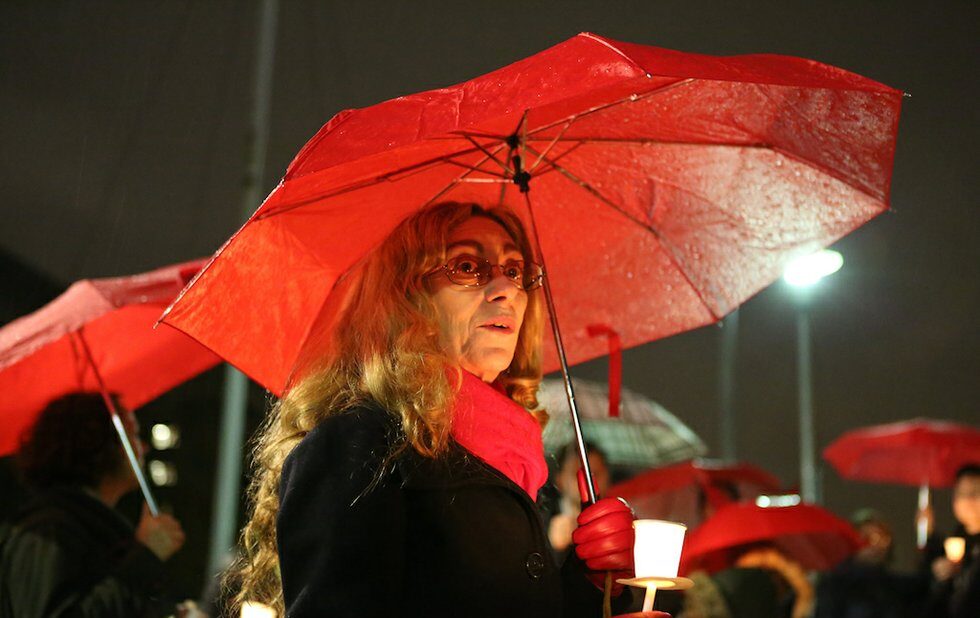 Recently, the owner of a Leslieville bar began a campaign against NOW Magazine.

Decals reading “NOW Sells Sex Slaves” have been appearing in parts of Toronto, including on public art. Letters making false and misleading claims that NOW “facilitates human trafficking” have been sent to many of the magazine’s advertisers and to Chief Federal Prosecutor Morris Pistyner.

The bar shared a doctored video clip on Twitter that also forms part of its campaign, which uses scenes from the movie Apocalypse Now to show the publication’s logo being shot and bombed.

But religious fundamentalists – and some old-school feminists –  have formed alliances and been quite successful in redefining all sex work as human trafficking. In their view, all adult women are incapable of making the choice of whom to have sex with if money is involved. And the owner of this bar has joined forces with them. (The bar was the subject of a NOW story in 2015 over transphobic posts on its Twitter and Instagram accounts.)

NOW Magazine has published sex workers’ ads since its founding in 1981. Many sex workers in the GTA, including myself, either used to or continue to run our ads in NOW.

Sex workers generally like to work together in locations we share, or with small agencies for safety and also for each other’s company. Even those of us who prefer to work alone arrange safe call systems with a colleague or a trusted friend. The ability to advertise is important because it allows us to screen clients much more effectively. Social media advertising only goes so far, and with new laws looming in the U.S. against the internet in general and platforms like Facebook, Twitter, Instagram and other social media in particular, that may soon end.

NOW Magazine has always stood up for our right to advertise.

In a Charter challenge to bawdy house provisions of the old prostitution laws by Terri-Jean Bedford, Amy Lebovitch and myself in 2013, the Supreme Court of Canada unanimously ruled in favour of our right to work out of our own homes on the basis that prostitution laws were forcing sex workers to work in the street and causing catastrophic harm. (Laws are not supposed to cause harm.)

The Court understood that harm would be vastly decreased by working indoors, together and with proper client-screening techniques.

But that victory was stolen by the Harper government which, in an effort to shore up its base before the 2015 election, used its remaining time in power to write even more regressive legislation that penalizes communication for the purposes of prostitution, which criminalizes clients and has had the effect of driving the sex trade further underground.

The new laws, which the Liberals promised to repeal during the election campaign, are so convoluted that many newspapers in small cities stopped running sex ads. Our colleagues in those cities have been left with very limited means of advertising. As a result, we are seeing an increase in street-based sex work across Canada.

Street work is dangerous. We work in dark isolated areas and jump into a prospective client’s car quickly. Clients are nervous because the penalties for having consensual adult sex that involves money can be as severe as a prison term. This is a gift to predators pretending to be clients. As a result, my colleagues continue to be raped, robbed and beaten. Since July 2017, four sex workers have been murdered in Canada.

If NOW stops running our ads, the safety and autonomy of sex workers in the GTA will be compromised.

But I doubt the owner of the bar behind the anti-NOW campaign gives a fig, because his crusade is really all about him.

We sincerely believe he does not care one bit about sex workers’ safety. We are fed up with being used as pawns, whether it be to shore up votes in an election or as part of a publicity stunt.

Valerie Scott is a long-time sex worker and sex workers’ rights advocate. She was a plaintiff in the Supreme Court of Canada case that overturned the criminalization of sex work and is a co-founder of Sex Professionals of Canada.

By Valerie Scott on behalf of Sex Professionals of Canada