On Rob Ford stadium question, John Tory comes off looking like a weakling (again) on racism

Latest Ford fiasco illustrates that on issues of race, Tory's own record is one of, at times, dubious distinction 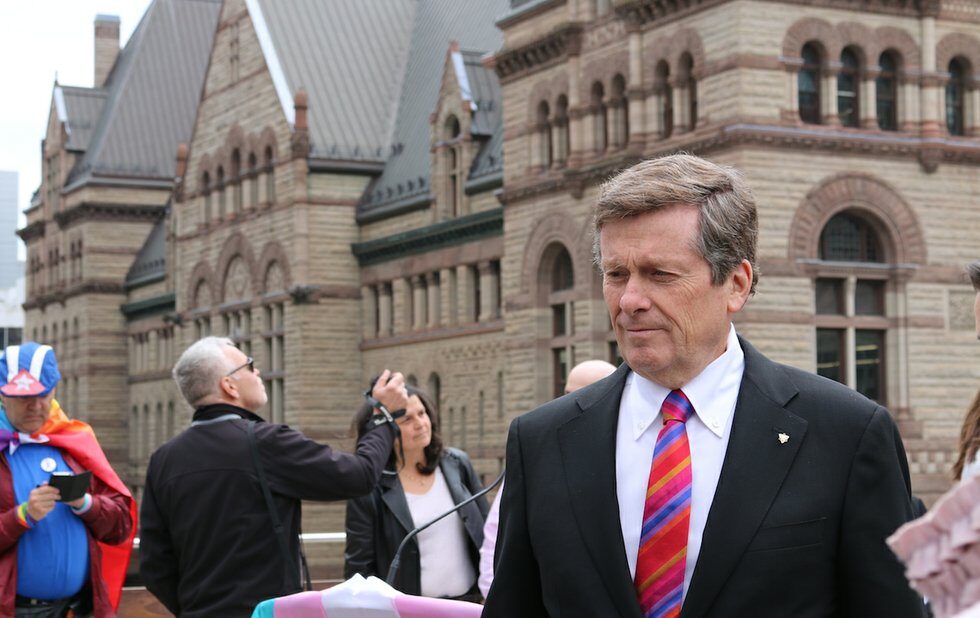 It’s Doug Ford 2, John Tory 0. The official race for mayor hasn’t started yet, but Ford has already managed to get under Tory’s skin since announcing at Ford Fest three weeks ago his intention to run against Tory in 2018.

ICYMI, the mayor has sent a letter to members of council urging them to give consideration to renaming a football stadium in Etobicoke after his late predecessor, Doug’s little brother, Rob Ford.

Apparently, the request for a dedication had been made by the Ford family some time ago but  the mayor has decided to make it a cause and move on it.

Many will disagree over whether Rob deserves to have anything named after him. But Tory’s motivations for pushing what is an unwelcome idea are just as bad. Clearly, he’s doing it to avoid having to take a position that may fire up Ford’s base. In other words, for reasons of political preservation.

Tory has already had to suffer the embarrassment of one of his deputies, Vincent Crisanti, showing up at Ford Fest to announce his support for Doug’s mayoral bid. Now this. And the race won’t officially get underway for eight months. At least, that’s when the candidates can start raising money.

But that hasn’t stopped Doug from launching what looks like a guerrilla campaign to try and exact some PR damage. Doug sicced little nephew Michael Ford, the councillor for Etobicoke North, on Tory after the Crisanti embarrassment. Mikey released a statement condemning Crisanti’s demotion as “purely based on politics.” It had Doug’s fingerprints all over it.

Doug showed up shortly after that for Rosh Hosannah ceremonies at Temple Sinai. Tory followed Doug’s appearance with one of his own a week later. I’m told Doug’s appearance was met with a smattering of boos. Yeah, he’s a huckster, no matter how much some among conservative commentators at the Sun and the Globe want to see a rematch with Tory.

However, the big problem with Tory’s latest gaffe is that he comes off looking weak, which in politics is never a good thing. And for Tory in particular, his backbone, more specifically his lack of one, is an issue that’s dogged him throughout his political career.

I don’t think Doug stands a chance. But a few more missteps like this from Tory and before you know it, politics being the blood sport it is, others might start to get the idea that the mayor is vulnerable and want to take a shot at challenging him for mayor. And that’s when the door opens for Ford.

The right thing for Tory to have done with the Ford family’s request would have been to leave it to the appropriate channels at City Hall to deal with it. Or, if he really wanted to make a statement, tell the Ford family to flock off.

We shouldn’t speak ill of the dead, but it would seem to be a simple matter to make the case why Rob does not deserve to have anything named after him, especially given the discussion we’ve all been having since Charlottesville about which public figures we choose to memorialize.

Quite apart from the crack scandal and drunken stupors, the truth is Rob Ford was a bully who ran roughshod over his political opponents, or anyone else who got in his way. He cultivated a man of the people image, but abused the power of his office. The damage he inflicted on our democracy and the city’s collective psyche are his legacy, to say nothing of his homophobia and bigotry, which were often expressed during his many drunken tirades and too vile to repeat here.

It’s in this context that Tory’s decision to take the path of least resistance and support a stadium dedicated to Ford is most troubling. Because on issues of race, Tory’s own record as mayor is one of, at times, dubious distinction. From his mishandling (and flip-flopping) on the carding file and refusal to meet with Black Lives Matter over the police shooting death of Andrew Loku, Tory has shown himself to have a blind spot in that area.

He got his back up when questions were asked of him during the carding controversy. He said then that he’d put his race relations record up against anybody because he has won a Diversity Award from the Black community, don’t ya know?

But then who could forget when questions were raised during the election about his own white privilege, which he famously claimed did not exist? Or how he stood idly by and said nothing when Ford supporters launched racist attacks – “Go back to China!” – against Olivia Chow at a number of all-candidates meetings?

I could go on. Like, how he refused to distance himself more recently from his friend, police services board chair Andy Pringle, and his fundraising activities for Kellie Leitch’s sorry “Canadian values” campaign for Conservative Party leadership. Not to mention his former campaign strategist Nick Kouvalis’s involvement in that mess.

I’m not saying that Tory is a racist. After the mosque shooting in Quebec City, he was unequivocal in his condemnation, taking part in a vigil at U of T. When Trump announced his travel ban from Muslim countries, Tory reiterated Toronto’s commitment as a sanctuary city. And then after anti-Muslim provocateurs descended on Toronto’s Masjid mosque during Friday prayers one day last February, Tory quickly and publicly declared his revulsion.

But the moment Tory’s own political ass is on the line, it’s always a different story.