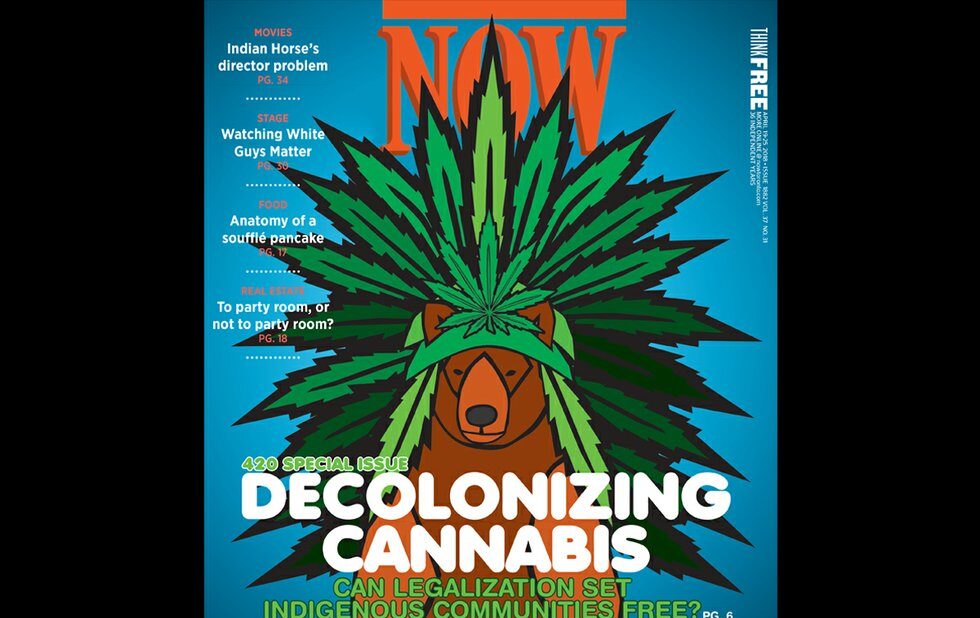 The cover image of a bear wearing a headdress made of marijuana  leaves sparked a flurry of confusion, since the image depicted things that many Indigenous people hold sacred.

The accompanying article by Kieran Delamont is well-written and researched, bringing together quotes and facts from several sources to raise the issue of Indigenous inclusion in the legalization of cannabis. But our concern is with the choice to use controversial images and wording to grab the attention of readers on a topic that is far removed from decolonization and not representative of the histories of all Indigenous people.

As artists ourselves, we have used controversial images to provoke responses from the public. But we also understand: no person can speak on behalf of all people or any community, culture or group. We, too, need to be accountable to our own communities. We would like to see the same transparency with regards to the image of the bear wearing a cannabis headdress.

The reason for this imagery is unclear, other than the obvious goal to provoke a response. This also goes for the headline referencing “decolonization” and “setting Indigenous communities free.” These words have many connotations and need to be considered.

Decolonization is the process of a power removing itself from a group or community considered to be the original inhabitants of a country. The original people have withstood the process of colonization and now must survive the removal and withdrawal of the power’s influences and structures. On a personal level, Indigenous peoples also have to work hard at decolonizing themselves, as many of our ways of life have been destroyed over the last 150 years since the creation of Canada.

The article references cannabis as medicine, and it is but it also talks about tobacco, blurring the line between medicines and sacred medicines in Indigenous cultures.

The reference to tobacco is more about Indigenous rights to traditional economies and colonial governments that have historically taken away these rights. Cannabis is not considered sacred the way tobacco is, but the right for Indigenous people to choose their own path on their own land is an important point.

It doesn’t make sense to compare tobacco as it does not play the same role for many Indigenous peoples. If the bear’s headdress had been made of tobacco and the article had been about community sovereignty and rights in relation to sacred medicines, would Indigenous people have responded with outrage? Perhaps or perhaps not, but in either case the message is completely different and both need more clarity.

The article also mentions incarceration associated with cannabis without going into detail. This raises questions about the headline’s reference to setting people free since many Indigenous communities have been victims of a justice system that disproportionately targets them.

It may have been more appropriate to entitle the feature Indigenizing Cannabis: Can Legalization Set Indigenous Communities Financially Free? The article is more about groups that want to utilize the medical properties of cannabis in a business sense.

Using Smoke Signals as a main headline was an eye-roller, even if it was a reference to one of the Indigenous sources who owns a shop called Smoke Signals.

NOW Magazine has triggered hurt feelings among Indigenous community members. But its editors were also prepared to give Indigenous advocates a chance to respond, which is a massive shift from the defensive stance encountered by many Indigenous communities when dealing with non-Indigenous institutions that routinely appropriate our imagery.

In no way are these criticisms an attempt at censoring artistic freedom. Jason Carter, the Indigenous artist who created the cover image, is not being shamed for using a marijuana headdress. But all artists must contextualize their work for their audience and create illustrations and imagery that do not perpetuate stereotypes of Indigenous people.

Often the reasons why we create the things we create can have a larger impact than the product itself.

Statement by the artist, Jason Carter

“I am a proud Cree-Canadian visual artist and I feel it is my mission to create work that enlightens, engages and brings joy.

I created two images for NOW on marijuana legalization and the potential impact on Indigenous communities.

I chose to approach these illustrations with the utmost optimism and hope, because that is my wish for what could be a real watershed moment for Indigenous communities and Canada.

I was inspired by two strong images in my community, the Bear and the Headdress. The Bear is a constant theme in my work. As a young man, I was told that the Bear was held in such high regard that one would go to sleep and hope to dream of the Bear. And if one did, success would come – whether it was for a successful hunt, health or the birth of child.

This beautiful idea has impacted my work greatly.

The Headdress historically was given to a member of a tribe who had shown leadership and garnered great respect and love amongst the community. Leadership. Respect. Love. A wish. A hope. This was the heart of the image and the context of the article. I brought in the marijuana plant to convey the idea that it’s a time for powerful leadership. I am proud of the pieces. It was never my intention to hurt or create divisiveness, and to those I have offended, I hope this provides some context.”