NOW MagazineNewsArtisans fight Made in Canada appropriation of Indigenous crafts

Artisans fight Made in Canada appropriation of Indigenous crafts

In Canada, some 70 per cent of Indigenous people help support themselves through traditional arts – now there's a national campaign aimed at putting an end to the importation of internationally made “knock-offs” 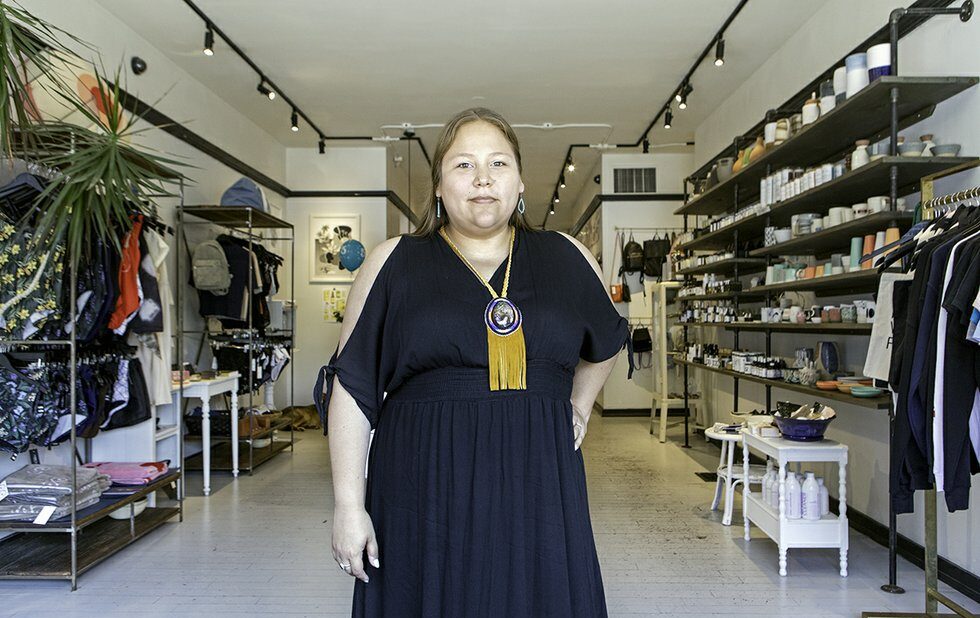 The next time you go out to buy a dream catcher or pair of moccasins, don’t be tricked by the Made in Canada label. Make sure they’re made by Indigenous artisans.

Over the past year and a half, her fashionable and contemporary takes on beaded earrings, brooches and bib necklaces have been sold out of Roncesvalles boutique Likely General.

But Lickers says she’s been told by other stores she’s approached that her work is too expensive and that it’s cheaper for them to buy knock-offs from foreign-based wholesalers than her handmade goods.

When Lickers approached Likely General’s owner Brooke Manning about selling wares in her store, Lickers learned that Manning was a victim of cultural appropriation herself.

“Brooke tries to make her shop as locally sourced and handmade as possible,” says Lickers. “[But] she was approached by someone who does dream catchers and other beaded stuff and it turned out that the person wasn’t actually Indigenous and a lot of it was mass-produced resell items.”

In Canada, some 70 per cent of Indigenous people help support themselves through art, says Jay Soule. He, along with Montreal’s Ashukan Cultural Space gallery owner Nadine St. Louis launched ReclaimIndigenousArts.com earlier this year.

The three-tiered initiative aims to educate consumers and government on the effects of counterfeit goods on the Indigenous economy. Goods with Made in Canada labels and without an artist’s name is often the first sign that it’s made overseas, says St. Louis.

“Ask the shopkeeper who made the artwork. If they can’t tell you or [don’t know] which community it came from, chances are it is not made by an Indigenous artist,” she says.

The effort is wide-ranging, and includes a letter-writing campaign to local gift shops and galleries selling mass-produced Indigenous-themed goods, as well as to city officials, encouraging them to enact a bylaw banning the importation and sale of inauthentic goods.

The group is also encouraging Prime Minister Justin Trudeau to implement the United Nations Declaration on the Rights of Indigenous People’s article 11, which states that “Indigenous peoples have the right to practice and revitalize their cultural traditions and customs,” which includes the right to maintain, protect and develop their cultures, including its arts.

The campaign has been embraced by artists and politicians alike – with Soule presenting the website to interested councillors from the city of Hamilton.

As a small business owner himself, Soule says the campaign isn’t looking to hurt the incomes of store owners.

“I want to give them opportunities to be good businesspeople. It isn’t an opportunity to sweep in – they carry and sell this stuff because they see a market for it and we want to become allies with them, in supporting us.”

Lickers says that some consumers don’t appreciate the value in handmade Indigenous art and the toll making items can take on artists. Lickers says her eyesight has been affected, her hands need regular massage therapy from manoeuvering the tiny beads, and the materials are expensive – she says leather hides she uses in her work are ethically sourced. She knows where the hides come from and that all parts of the animal are used.

While Lickers made the move to sell her pieces in-store, many other Indigenous artisans choose to stick to vending, selling at pow wows and taking orders via Instagram or Facebook.

Squire quit her job in Toronto to work full-time with the company with her mother (who has 30 years’ experience in making moccasins), her boyfriend and her aunt.

Squire makes contemporary Iroquois raised-beadwork moccasins, while her mother makes more traditional-style moccasins, which Squire says have a large market because they’re worn at traditional ceremonies and weddings. Some elaborate pairs can take up to a week, and she charges up to $150. She says that what surprises people is that their moccasins are 100 per cent hand-cut and hand-sewn, and no part of the process is automated.

As Leah Mack, one Mohawk Mocs customer, wrote on the company’s site recently, “In this day and age, when ‘Indigenous’ is hip and trendy (it seems), I would rather support someone who understands the culture and is promoting it through well-made, high-quality mocs rather than mass-produced, no love, knock-offs.”