It’s not just a few bad apples, Canada has a major problem with racism, abuse and sexualized violence when it comes to policing Indigenous communities 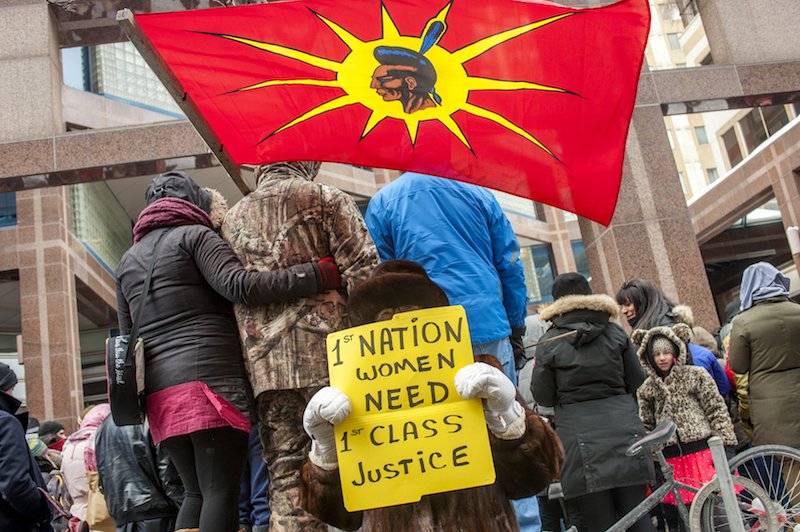 There is a darkness that lives in Canadian society – sexual predators who are able to commit horrible crimes against Indigenous girls with relative impunity because our society has looked away.

One such predator physically assaulted and raped little Indigenous girls, driving them to remote locations, sometimes leaving them without their clothes to fend for themselves after the assaults.

In addition to threatening to kill them if they told anyone, he told these girls that no one would ever believe them.

It has been reported that as many as 10 men helped facilitate his access to Indigenous girls. What most people don’t know is that he was a sitting judge in British Columbia and his alleged accomplices RCMP officers.

When Prime Minister Justin Trudeau committed to a national inquiry on murdered and missing Indigenous women and girls, he raised the hopes of thousands of Indigenous families and communities that they would finally get concrete action to end police racism and neglect in investigating the murders and disappearances.

The federal government was headed in the right direction as they promised to work in partnership with Indigenous families, experts and advocates to write the terms of reference. The “engagement sessions” showed a strong desire by most involved to investigate the handling (or mishandling) by police of homicides and disappearances as well as reports of abusive police behaviour.

But despite the overwhelming consensus – or maybe because of it – the federal government decided to write the terms of reference with the provinces and exclude Indigenous women and communities from those meetings.

The parameters ultimately set for the probe excluded a review of two of the most important aspects of the national inquiry: the failure of police investigations and the extent of police sexualized violence, and what role they may have played in the continued disappearance of Indigenous women and girls.

This was a shock to Indigenous families and women’s organizations. While Canada was prepared to blame history and colonization for the vulnerability of Indigenous women, it was not prepared to look at the role of its own officials.

While there has been widespread criticism of numerous limitations already placed on the inquiry compared to the Truth and Reconciliation Commission on residential schools (including the short time frame and minimal budget), the lack of authority given to investigate the police has gutted any hope of a thorough review.

The United Nations Committee on the Elimination of Discrimination Against Women (CEDAW)  spelled out in its 2015 report the “grave violation” of the rights of Indigenous women by police in  failing to investigate the violence they suffer, not to mention the legacy of fear and mistrust of law enforcement, which leaves Indigenous women few pathways to justice when the perpetrators are the police themselves.

If the national inquiry won’t deal with these issues, what is the point?

In Saskatchewan, the province infamous for its police practice of “starlight tours” (driving Indigenous men far out of town and leaving them), Human Rights Watch (HRW) has again documented numerous incidents of sexual assaults committed by police officers against Indigenous women, most of which never result in officer discipline, in a report released June 19.

HRW first raised the alarm about RCMP officers raping Indigenous women along northern BC’s “Highway of Tears” in 2013. That report, which included testimony from 50 Aboriginal women and girls from 10 communities, told of police threats and torture as well as sexual assault.

In Manitoba, one police officer detained, arrested and imprisoned an intoxicated Indigenous woman, then escorted her out of prison to his home to have “relations” with her, all apparently with the blessing of his superior officer.

In Quebec, eight provincial police were put on paid leave in the fall of 2015 after a large number of Indigenous women came forward to report physical and sexual abuse. Convictions have followed in some cases but not others.

Canada has a major problem in policing when it comes to Indigenous communities. Racism, abuse and sexualized violence are often explained away by the prevailing myth that these stories are limited to a few bad apples. Yet the facts have been staring us in the face for decades.

The Royal Commission on Aboriginal Peoples brought attention to the particular kind of racism experienced by Indigenous women way back in 1996. Its findings were echoed in the subsequent Aboriginal Justice Inquiry.

Those who believe that this is only an Indigenous issue and does not affect their own families and communities should think again.

Sexualized violence by police in Ontario is especially serious. Last year, there were no less than 50 police officers in the province suspended with pay for serious crimes like attempted murder, sexual assault and drug trafficking.

Closer to home, three Toronto police officers are currently on trial facing gang rape charges. A York Regional Police officer was charged recently with sexual assault of a girl under 14. Peel Regional Police have been charged with accessing and possessing child pornography.

These are only a few examples. These could be your children, sisters, wives and mothers.

A national inquiry that investigates the impunity of sexualized violence by police would not just save Indigenous women and girls from further harm, but make us all safer.

It is incumbent upon all of us to demand better of this government and support the demands of Indigenous women, advocates, experts and organizations to include police racism, abuse and sexualized violence in the discussion.

But all signs point to that not happening. In addition to the delays, the inquiry has either terminated or lost numerous staff, including its executive director last week.

And a full schedule of hearings won’t get underway until the fall of 2017, a whole year after discussion around terms of reference started.

Adding to the time crunch is the requirement that the commissioners submit an interim report in November of 2017. What could they possibly report?