Inside the Casablanca Cafe

Shisha makes for a culture and health code clash 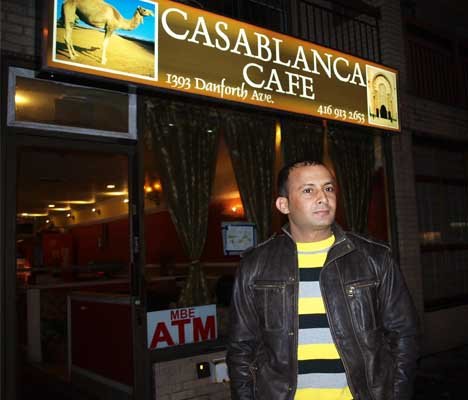 They come from across the city, and across the world, to experience the magic of “Mansour’s Place,” a shisha bar on the Danforth officially known as the Casablanca Café.

“It’s like a community centre,” says customer Salman Alawad, a 29-year-old native of Riyadh, Saudi Arabia, of his favourite cafe where the staff collectively speak as many as seven languages.

Since immigrants from Asia and the Middle East make up nearly 70 per cent of newcomers to Toronto and as shisha culture roars it’s way into mainstream Canadian society, places like the Casablanca Café that promote integration so effortlessly will be crucial to the success of a city that prides itself on its diversity.

Alawad says he has been coming to the Moroccan café east of Greenwood to smoke shisha, also known as hookah, and watch soccer since it was a stuffy hole-in-the-wall mainly for domino playing Middle Eastern men.

“It was terrible, it was not like this,” the Real Madrid fan says. “Everything changed: the shisha changed, the food changed, the surfaces changed.

“Mansour’s so kind,” he said. “People like this place.”

From banter in Toronto mosques, to chatter in campus classrooms, all the way to word on the metropolitan streets of Saudi Arabia, the Casablanca Café’s also has something of a rep.

“It’s a good business here in Canada, especially Toronto,” says El Habchi, a Moroccan with a masters in economics from Germany. “Why not people from other countries as customers?”

El Habchi bought the business in September 2006 at a time when there was almost nowhere to get shisha on the Danforth. He says his main motivation for choosing the shisha trade was to meet people from his community.

With a number of Ethiopian establishments opening their doors in the area recently, some have started started calling the area Little Ethiopia.

Meanwhile, Toronto Public Health is watching another kind of cultural clash emerge, as young immigrants and Canadians take up a potentially dangerous pastime.

Rob Colvin, who leads the healthy environments initiative, says the various types of shisha available could be as dangerous as cigarette smoking, though because it is not a traditional Western product, there isn’t enough research to say for sure.

Under the Smoke Free Ontario Act there is a prohibition on smoking shisha tobacco product inside businesses, though “herbal hookah” is not covered under the legislation.

“What we’ve found is it does tend to be moving over to more of the mainstream types of establishments and also to people that may not be part of the culture where hookah pipes originate,” he says. “We’re also finding that there’s a lot of young people taking up the ‘habit,’ if you will.”

“Shisha has big advantage,” he says. “Shisha is like something that give the place where you do it a social environment.”[rssbreak]