If this is what the post-gay-lib world looks like, then I preferred it when everyone else disliked us and there was always a party going on somewhere 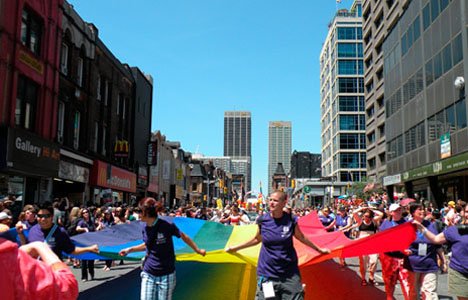 I’ve been an openly gay man for more than 30 years. I hope I haven’t seen it all, but I might be close.

It’s clear to me when I look back over the span of three decades of immersion in the community that there never really was a “gay community” in the first place, and that what passes for one today is slipping away.

I at least am beginning to recognize Pride again.

It started out as a protest march when we were all societal pariahs. Then it became a party. Now the politics are back, and people are pissed about it.

Whether you agree with Black Lives Matter – Toronto or not, they’ve got a point to make. They’re not here to be liked or accepted, and good thing for them. They’re here to demand an end to discrimination, the very point of the Pride parade in the first place.

There have never been any membership requirements to join this club. We could be of any race, religion, age, education, socioeconomic status or political stripe. The thing we have in common is our same-sex attraction. And attitudes toward that have changed.

Lots of guys don’t even use the label “gay” or “bisexual,” just some vague concept of “men who sleep with men,” creating a category even less committed to the team than the average closet case. In other words, we now seem to have nothing in common any more except whom we (sometimes) like to sleep with.

It’s as if what we called “the gay community” were really just spaces where we met to find people to sleep with. In the 80s, those were parks, bars down dark alleyways, bookstores, tearooms and bathhouses. We were all looking for the same thing and taking some risk to do it. Those spaces and that culture are rapidly disappearing.

There are only a handful of gay bookstores left in North America, a consequence of the fact that you can find any gay book on Amazon, and loyalty is not enough to beat out convenience and deep discounts. Virtually every gay magazine has either folded or retreated to a modest on-line presence.

The gay village in Toronto has few gay-owned businesses left. The bars and bathhouses are also vanishing. Most cruising happens online. We no longer have to turn up in person and show our faces to meet someone we just select a body part or two and show it in a selfie.

Straights love us. In fact, they love us so much they bring their kids to the Pride parade. These events are so family-friendly now that you’re more likely to see opportunistic politicians and grandmothers and masses of dykes pushing strollers than shirtless men ­dancing to the Village People. The whole affair is so damn respectable.

So, why am I not feeling the love? Because while gays have more career opportunities than ever, we also have more guilt and angst than at any time I can remember.

Sure, we can get married. But mostly we don’t. The last available census data shows that less than 1 per cent of all married couples are gay or lesbian.

There appears to be an inverse relationship between how much acceptance we have in the broader community and how much respect we have for ourselves. Outside the big cities, it’s still rare to see people living openly gay lives. Many don’t even like to say they’re gay in private.

The internet is the worst thing that ever happened to the gay world. Everyone goes online to find partners, and not the kind you bring home to mom.

On any given day there are a dozen pages of men looking for casual sex, and not one of them wants a relationship or will even show a picture of his face. Many are seeking men who are “straight-looking and straight-acting” – and definitely not effeminate or they’re dead in the water.

If it weren’t for the supposedly straight married men in my life, I wouldn’t have any dates at all.

Everyone is reduced to a set of stats and dick pics. We are not greater than the sum of our parts. We are judged solely on what we can offer up in a selfie or two. But the guys on the other end aren’t playing fair. Their pictures are way out of date and everything is measured in Internet inches and pounds.

Despite the internet becoming the Pizza Pizza of man-pepperoni – delivered in 40 or it’s free – we’re having less, not more sex. The internet crowd hide behind computer screens, enjoying virtual sex lives they’re too afraid to have in the real world.

Back in the day, wandering around a bathhouse in a towel, we were what we were, and there was no hiding it. We eyeballed someone, and it was either yes or no. We had to keep it real. On the internet, truth is a relative thing that must never reveal itself by showing up in person.

This is what the post-gay-lib world looks like. I preferred it when everyone else disliked us and there was always a party going on somewhere.