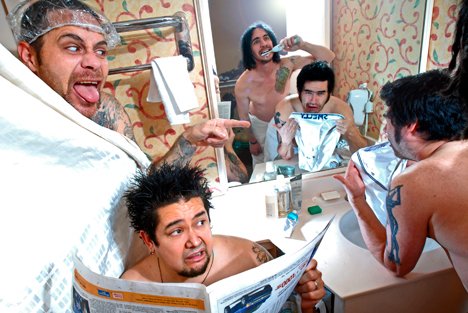 Careers like the one NOFX is having just don’t happen in punk rock.

Bands don’t play for 25 years and stay relevant. They don’t put out impressive new records, in this case Coaster, that sound as good as they did in the peak of their youth. They don’t maintain the same level of popularity and even increase it 10 albums in. But this is what’s happening to NOFX and you can’t say they don’t deserve it.

Outspoken frontman Fat Mike took time out of his busy day waiting in line at the passport office to muse about his anomalous punk rock success story.

Do bands come up to you asking for advice?

Yeah but there’s no advice anymore. All I tell bands is make sure you’re really, really good. But there’s no way to tell that because every bands thinks they’re good. That’s the funny thing.

You’ve had an amazing career but what about in the mid 90s, do you think you could gotten a lot bigger? For instance, you held back the video for Linoleum from MTV at a time when Offspring and Green Day were blowing up and getting huge.

No way we shouldn’t have done that. Because once you get really big, you can’t hold on to it. You can’t sustain that level of popularity. Our level of popularity we can sustain. Our crowds have never gone down. We sell out places all the time, the same clubs we always play where if you look bands who did go the MTV way, Green Day is probably the only exception. And they’re not even a good example because they were big for a few years, but by the time they put out Warning and the greatest hits album, they were doing nothing. They were back to playing clubs. It just so happens American Idiot struck a chord with everybody. But if it wasn’t for that record they would be in the position Offspring are in – a band that is totally out of the loop right now, nobody cares about their records and they have no respect in the industry.

Yeah I got into punk rock around 1981. It’s got a 70s look because it’s supposed to look like Ronco product. The music is early 80s-sounding though.

There’s a song on here called My Orphan Years, which discusses the death of your parents from a few years ago. As far as I can tell, this is most personal song you’ve ever written.

It is for sure. I knew I wanted to write it but it wasn’t fun to write and it wasn’t fun to sing. I like playing it live because it gets me into the moment. It’s the toughest songs we have to play emotionally but I’m usually so drunk and on drugs my feelings are not high on my body’s list of priorities.

You’re completely unapologetic about substance use on this record.

Over the years I have no shame in anything. Everything I do is pretty much on my sleeve.

You play to some really young audiences do you ever consider maybe you’re making it look too glamourous or cool?

If people read interviews and know where I’m coming from, I don’t think it’s glamourous. People ask, ‘what about your daughter? How are going to explain to your daughter that you’re a drug user? How is that responsible parenting?’ Look, I’m going to tell my daughter to do it exactly how I did it: finish college, pursue a million dollars, and then you can try experimenting with drugs. I didn’t try drugs until my 30s. I don’t have to apologize for anything.

How did you manage to hold out that long, especially considering the touring band lifestyle?

Same thing, I wanted to go to college and do stuff in life. I didn’t want to fuck up and ruin my brain when I was young, which is what happens to a lot people. Their lives are over and they’ve ruined shit by the time they’re 21. Our drummer was on heroin in the 80s and 90s and his life was total shit. But we pulled him out of it and he finally quit. Years later, around 1998, me and (guitarist Eric Melvin) started doing more drugs.

This is like when Charlie Watts became a heroin addict in the mid-80s. Is it overcompensating?

I tried cocaine at 32. But now I’m coasting. I don’t’ have to figure out how to start a business or get band my band established. All we have to do is keep playing well and write good songs. Those are my responsibilities.

I suppose you know your limits a lot better at that age.

Exactly. I’m not about to OD because I know which drugs mix well together. Like what goes well with Vodka.

Is there a special Fat Mike stage cocktail?

Vodka, milk and valium and I’m usually good to go. Actually I usually have three or four vodka drinks before I go on stage. I don’t want anything to do with feeling sobre on stage.

Speaking of hard drug use, your really didn’t hold back much on your world tour documentary Backstage Passport?

Why? It wouldn’t be very good if we did. The thing is, just about every band we go on tour with does the same thing. Everyone is doing drugs, they just don’t talk about it or film it. I’m just not ashamed of it, drugs are a fun thing to do when you’re old enough to do them right.

Still, you didn’t flinch at all when watching it back? Like for instance sniffing “Green Dragon” in Singapore, you were completely destroyed.

We didn’t even show the gnarly stuff (laughs). No, the Green Dragon was the most fucked up I’ve ever been in my life. But there’s so much other drug use in that series, it’s crazy. And the S&M footage from Japan, let’s just say we went to clubs five nights in a row. I didn’t show me because my wife gets upset.

Yeah I was the one getting worked over every night.

But you only showed your roadie getting tied up.

Yeah, like I said, my wife was freaking out about it.

Do you think you messed up your chances of getting back into some of these countries? Singapore for instance.

We don’t really need to go back to Singapore. The only place I would go back to is Korea maybe. Jakarta was big show but a total disaster. Maybe Taiwan and Hong Kong. We played in China to 1500 people and they paid us nothing. It was a bummer but we’re in China, what are we going to do about it? Sue the guy?

There’s a moment when you’re in Russia and you look at the camera and say “luckiest band alive.” You still feel that?

Yeah, so far so good. No complaints. We just got back from France, it was 2500-3000 people a night in weird cities we’ve never been to. We’re not getting less popular anywhere and in some places we’re getting more popular, and it’s weird. We’re old. I’m 42 and I’m the youngest guy in the band. I really do feel we’re the luckiest band because we haven’t done anything that amazing, we just do our thing. We’re a very fortunate band. You pretty much can’t get a better career that we’ve had.