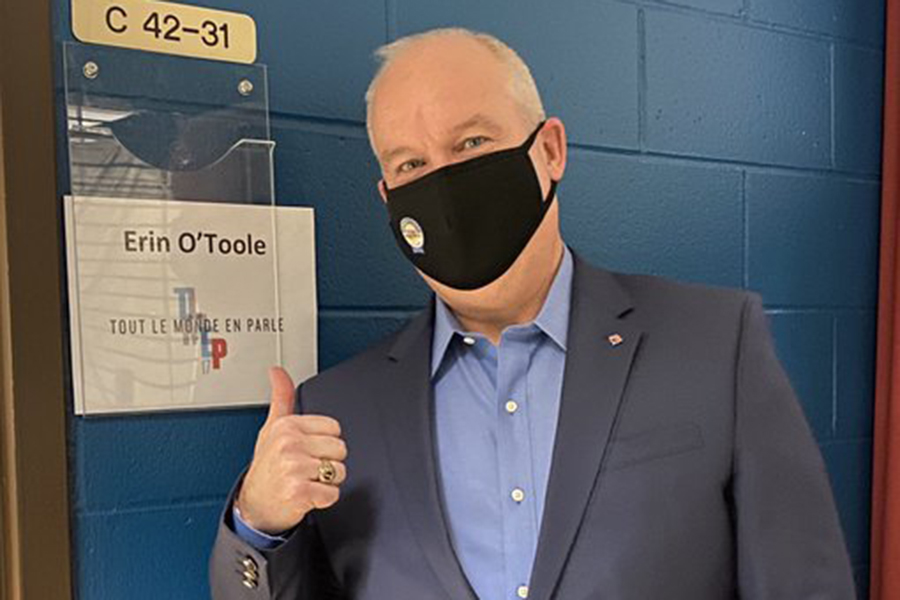 It’s been quite a first 100 days at the helm for Conservative Party leader Erin O’Toole. The video released by the party on Wednesday to mark the occasion rhymed off all the party’s accomplishments so far. The most notable: the party raised more money in the third quarter of this year than ever before in a non-election year. O’Toole has turned into quite the salesman.

But whether the pitch is working outside the party’s base is entirely another question.

A poll released by Pollara on Wednesday shows the Liberals widening the gap over the Conservatives in popular support in the key battleground of Ontario. More conservative pollster Angus Reid has the two parties in a “dead heat” nationally, but Trudeau markedly ahead in popular support. EKOS has the Libs up 6.5 per cent – and, more importantly, at 46 per cent in Ontario and 36 per cent in Quebec.

O’Toole sold himself as a moderate when he became conservative leader – the first, in fact, from Ontario since god knows when. He was supposed to win votes for the Cons in the all-important 905. Instead, he’s fashioned himself into a Trumpian knock-off.

Canadians still don’t know what to make of O’Toole. That’s the problem – he shows one face to Canadians at large and another to the lunatic fringe in the party’s base.

After setting a more cordial tone, his recent performances in the House have become erratic. It’s gotten to the point that his line of questioning during the recent economic update had some on social media wondering whether he’s morphed into Trump sidekick Rudy Giuliani. That may be a little harsh. But the misinformation campaign he and his party have engaged in on the coronavirus is unmistakably Trumpian.

Some Ottawa pundits think there’s a method to his madness. That he’s not just falling prey to the Canada Proud cabal who played an instrumental part in his leadership win.

It doesn’t appear that way given how O’Toole has spent so much of his time trying to turn the pandemic into a partisan political issue. O’Toole used a press conference on Thursday to demand to know what date the Liberals plan to start shipping a vaccine. It’s a mug’s game.

The two leading candidates, Pfizer and Moderna, have yet to receive emergency authorization from Health Canada, which has been conducting a “rolling review” of vaccine candidates since late October. O’Toole knows that. And he knows that safety protocols must be met before any vaccine can be distributed to the general population. But he would have Canadians believe the government is hiding something, and that nefariousness is at work.

“The United States is planning to have 100 million vaccinated by the end of February and its entire population vaccinated as early as June. The United Kingdom is starting their vaccinations next week. And France is rolling out a national vaccine plan for most of the country from April to June. But Canada is nowhere to be seen,” O’Toole said at his presser Thursday.

The U.S. and UK are the two Western countries Canada would least want to emulate in terms of pandemic response. But there were a few more misdirections in O’Toole’s prepared remarks and during the abbreviated question and answer period with reporters that followed.

As a former military man, O’Toole has learned a thing or two about diversionary tactics and throwing smoke bombs to cover your tracks. And so it was when O’Toole was asked about the petition tabled by MP (and former leadership contender) Derek Sloan on behalf of anti-vaxxer group Vaccine Choice Canada. It questions the safety of a coronavirus vaccine and likens its mass distribution to “human experimentation.”

O’Toole blamed the supposed lack of transparency in the Liberals’ vaccine plans for causing anxiety. O’Toole then grinned a cheeky grin.

But he didn’t stop there. As is becoming customary with the Conservative leader, he couldn’t resist looping China into the Liberals’ vaccine fail.

He mentioned the CanSino deal to develop a vaccine and how “After months of putting all our eggs in the Chinese basket… Canada now finds itself delayed, and behind most other G7 countries,” on a vaccine. In fact, Canada has secured more doses than any other country.

Then there’s the mess O’Toole key leadership backer, Alberta Premier Jason Kenney, has made of the pandemic in the party’s heartland out West. O’Toole was asked about that on Thursday; he blamed the feds for “setting up the provinces to fail.”

That’s another one that’s hard to square with the facts: Kenney is calling on the feds to send in field hospitals even as he’s said he won’t require Albertans to vaccinate when a vaccine becomes available. The Con deception on the coronavirus knows no bounds.

4 responses to “Is Erin O’Toole turning into Rudy Giuliani?”