Outsiders believe this island nation is a land of bandits. Blame the NGOs for the “looting.” 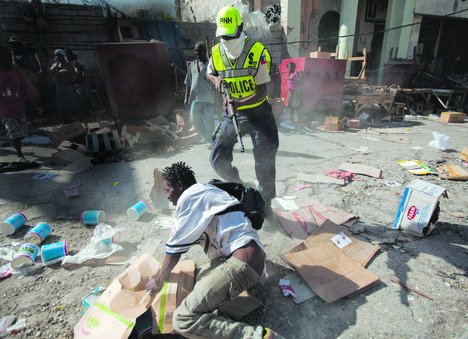 Port-au-Prince – We are at a supermarket inside a sealed-off compound. Over the wall, we can see into neighbourhoods where houses are heaps of rubble but not a single rescue worker’s in sight.[rssbreak]

Inside the compound, a massive rescue operation is going on involving workers from Iceland, the U.S., Spain and Venezuela. I am a translator for the head of the rescue team. In the past 24 hours, nine people have been recovered alive – all but two, Haitians report, by Haitian civilians.

But the foreigners with the fancy rescue suits, carabiners, boots, dogs and listening devices are all clustered here: a dozen dogs, more than 60 men with earphones tuned into digital hearing devices or with computers.

All the while, people have been helping themselves to goods from inside the market. Now the United Nations officials arrive with Haitian police. The Icelandic crew informs them that rescuers cannot do their work because of the “looters.”

The UN officials, the chief of the rescue crew, my friend and I go out the 10-foot steel gate and around the body of a woman I have stepped over for several hours now. We walk to the mangled and collapsed wall of the supermarket, through which the “looters” are passing.

I want to get there before the police. I’m aware that as a blan (foreigner), police might think I’m some kind of official. I hope my presence will prevent them from becoming violent. It works.

“Hey,” I shout to those rummaging for goods, “we have to clear the building out so rescuers can look for people who might be alive.”

“Looters” filter out from the dark recesses of the building, loaded with finds. One woman has a sack of food she can’t lift. I suggest to various men that they help her, but they ignore me. One says, “Each to his own” as he hefts a case of laundry soap onto his shoulder.

“Mesi, blan” – which is not Kreyol for “Thanks, white guy,” as many might think, but “Thanks, foreigner” – people keep saying as they leave, their arms full of as much as they can carry.

Those with goods stagger down the hill toward the waiting crowd, past the police. People tear into the sacks and boxes. It reminds me of hungry fish. They jerk and pull, tearing the parcels open and spilling the contents.

What to make of all this? To the rescuers, it must seem like the breakdown of any semblance of order or control, the end of society. It’s terrific press, though. I can imagine the headlines already.

But any person who knows Haiti realizes it’s something else, something that has been occurring here for 50 years now.

This is about “loot,” free stuff, something there for the taking, an unearned resource that has no apparent owner. Haitians have another name for it. They call it “piyay,” materials to be pillaged, and it usually refers to goods from blan, who for more than five decades have been inundating Haiti with food, used clothes and other aid.

Most outsiders have been conditioned to believe that anarchic Haiti is a land of bandits, but all the evidence suggests the contrary, at least compared with New York City or Washington, DC.

Haiti has the lowest crime rate in the Caribbean. The homicide rate, according to the UN, is among the lowest in the entire hemisphere, one-sixth that of the neighbouring Dominican Republic or Cuba, one-eighth that of Washington, DC.

The mad frenzy is not about hunger or thirst. I’ve been in these same neighbourhoods all day. No one asked me for food, water or money. The mayhem was about “piyay,” unearned resources, like the goods from the outside habitually distributed in Haiti with little or no accountability or control.

There has been no prosecution all these years of authorities who’ve helped themselves to stolen food earmarked for hungry children or sold medicines meant for the infirm, or of politicians who embezzled aid dollars meant for reconstruction.

What I’ve learned from 20 years of working and living in Haiti as a researcher, consultant and sometimes aid worker is that it’s not the greed of Haitians but the indiscriminate distribution of goods that has corrupted the society.

Piyay from foreign missionaries and aid agencies with the best of intentions but little understanding of the culture they are working in too often turns the village sociopath or criminal into the wealthiest member of the community.

And now, in the wake of this disaster, the piyay is about to arrive as never before.3

Tim Schwartz is the author of Travesty In Haiti: A True Account Of Christian Missions, Orphanages, Fraud, Food Aid And Drug Trafficking (BookSurge).