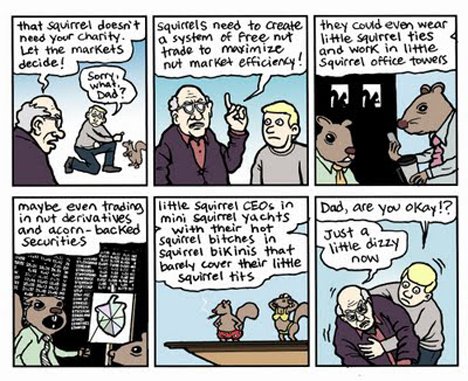 Michael Winters took upon himself the grueling task of drawing 30 comics in 30 days, while challenging his fellow bloggers (Fish Griwkowsky and Stephen Notley) on Chambers of Comics to muster up the same kind of tenacity.

The reason behind the creative challenge? To celebrate the art of cartooning. And, well, because no flame burneth brighter than the one lit under your own ass. His words, not mine.

The local blogger and his friends aren’t even halfway through the 30-day comic marathon, in which Winters vows to be victorious, and the comics rolling in are already consistently hilarious, pithy — sometimes risky.

The capitalist squirrels is a personal favourite so far, but there are other great ones, including Seattle-based Stephen Notley’s Cracker Comix entries.

It’ll be exciting to see who hits the wall first, and what Winters’ 30th comic will look like – or if he’ll make it to 30. The pressure is on. In any case, the next 20-something days are going to be awesome.

I caught up with Winters to talk about how he’s holding up, and here’s what he had to say:

How do you go about finding ideas for each day?

I don’t have anything mapped out, but I usually have a couple ideas rattling around my head. Of course, that doesn’t mean they are actually funny ideas once I sketch them out.

Other times I just sketch for a little bit and something usually comes along. There’s a D&D parody strip on the site that came out of drawing a single boob, which, unless I’m mistaken, was also how Vladimir Nabokov came up with the idea for “Pale Fire.” Little fun fact there.

How long does it take, from conception to putting it on the web?

Between 2 to 6 hours, on average. Sometimes for no good reason, a strip takes forever.

Any road bumps yet?

Yeah, I have a normal office job working at this 24-hour newswire, but on Saturdays I work 12-hour shifts. This means I have to squeeze out a strip at some point during the work day, and just now I realized I may have left a strip on our company scanner. We’ll see if I get fired!

Given any thought on what your 30th comic will be?

Actually, yes! I’m thinking I’ll do some sort of debauched “wrap party” strip featuring every cartoon character that I will have managed to introduce in the previous 29 days.

How confident are you that you’ll even make it to 30 in 30 days?

I’m more worried about quality control than making the 30-day deadline. Technically, I could draw something with my feet and call it a “cartoon”…I may end up resorting to that before my 30 days are up.

You know what’s a red flag for a cartoonist who has no ideas? A strip about a cartoonist having no ideas – if you see one of those, then I’m in trouble. [rssbreak]