Know who wins my just deserts award for the simplest and most complex, easiest and most demanding, most straightforward and. 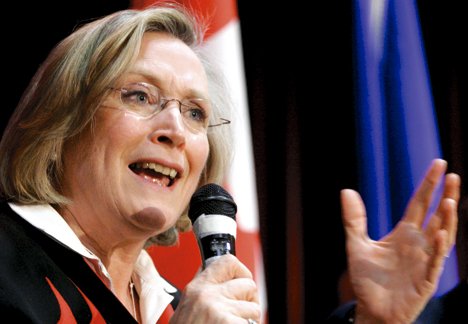 Ousted from the political hot seat

Know who wins my just deserts award for the simplest and most complex, easiest and most demanding, most straightforward and paradoxical proposal of the year?

If that sounds like a piece of cake, don’t be fooled. It’s a little-?known fact that no country in the world has a food policy. Most have agricultural, fisheries or nutrition policies, but none has an overall food strategy.

England, Scotland and Wales are edging toward one, and a handful of individual cities like London have one, but that’s about it. Many countries have a transportation, energy and foreign policy, but food, the stuff that makes a life-and-death difference and is a staple of everyday life, sociability and popular culture – no need to plan ahead on that, it appears.

“We need to tease out the big picture,” Bennett says. The MP’s appetite for the big idea she’s now promoting was fed by her 2003-to-06 stint as Canada’s first minister of state for public health. That job was “typical women’s work,” she tells me during a long phone conversation, “- all responsibility and no authority. I couldn’t fix anything.”

She got caught in “big fights with the food guys,” she recalls, whenever she tried to break free from the traffic jam and gridlock of multiple ministries and departments driving different aspects of food policy in different directions.

Ousted from the political hot seat after the federal Conservatives took power in 2006, Bennett had time to become a foodie. She was smitten by a riding project to turn the Wychwood transit loop into a green barn for artists, community gardeners and farmers’ markets.

“It’s everything that’s good. It just lights up my life,” the effervescent pol says.

There are many vicious circles waiting to escape from silo hell: funding school meals to head off the medical costs of diabetes ensuring hospital and other public institutions buy local food as a health and enviro solution using food scraps, now giving off global warming methane in landfills, as compost for degraded soil and so on.

It doesn’t cost more to solve these issues. Advocates of a unified food policy say it just takes a watchdog food minister to insist on finding ways to turn one department’s woes into another’s solutions.

But campaigning for a minister of food isn’t the same thing as backing a ministry of food, Bennett says. “We don’t need another silo.” A minister can convene interdepartmental meetings and set up a citizen-?based food policy council, as England’s minister for environment, food and rural affairs is now doing.

Bennett has faith in serendipity. She’s a devotee of a manual co-authored by York business professor Brenda Zimmerman called Getting To Maybe. It’s for hip, chaos-?era organizing amidst the confusion of intersecting issues and complex systems. “That book has changed my life,” Bennett says.

She’s searching for the kind of broad agreement and loose collaboration that might become the norm in a new era of coalition government.

Wayne Roberts is the author of the recently ?published No-?Nonsense Guide To World Food.