Following Mark Saunders's murky departure, a cone of silence has fallen over Toronto's drawn-out search for a new police chief 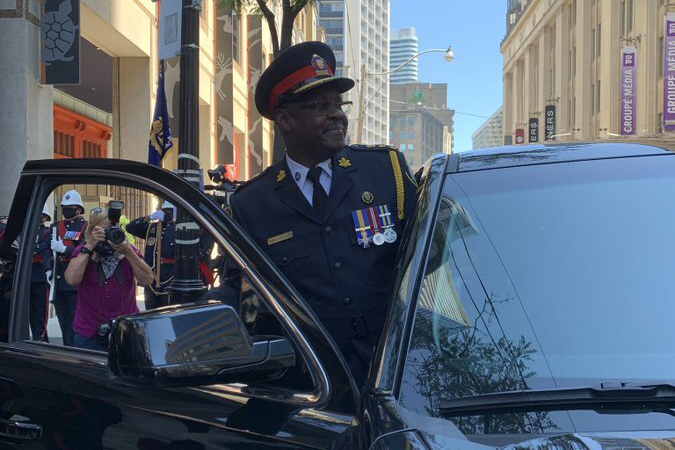 Almost nine months after Mark Saunders vacated his seat, Toronto’s search for a new chief of police seems to have stalled.

According to Sandy Murray, senior advisor to the Toronto Police Services Board (TPSB), the promised international search to find a new chief won’t start until after public consultations are completed – and it’s still not clear when the latter is expected to get underway. Murray offered no specific timeline on that.

She says that will begin “soon” and that the board “fully expect(s) the process to conclude in 2021.”

The TPSB has hired Environics to set up public consultations and Boyden Inc. to provide executive search services. But none of that can really happen until the board has developed the chief selection criteria that will be used to choose a new top cop, and that hasn’t been done yet.

Saunders officially left his position on July 31 after announcing his departure June 8 under a cloud. That was during summer protests over the police custody death of Regis Korchinski-Paquet – and George Floyd in the U.S. – and all the old questions those incidents raised about policing and police training when it comes to dealing with people in distress.

Calls to re-evaluate ballooning police budgets and turn over certain police functions to social service agencies followed. But fast-forward nine months later and we seem to be no further ahead on a replacement for Saunders – or, depending on who you talk to, the promised agenda for change.

On the latter, some steps have been taken, but efforts to rationalize police spending in a significant way have mostly fallen by the wayside. There have been symbolic gestures, like a zero per cent increase in another billion-buck police budget, but none of the substantive cuts of 30 to 50 per cent in the bottom line that social service agencies and policing reformers are calling for.

On the search for a new chief, meanwhile, the cone of silence around a replacement for Saunders has given rise to speculation – and a little more than the usual intrigue that marks such a politically-charged appointment.

The recent resignations of the force’s two female deputy chiefs, Barbara McLean and Shawna Coxon, has blown two big holes in the police leadership, not to mention the force’s modernization plans. Both McLean and Coxon had been uniquely tied to the force’s reform efforts. It’s part of why they were both promoted back in 2017. Coxon, who oversaw human resources, is headed overseas to work as the deputy commissioner for Ireland’s national police and security service. McLean will be overseeing the federal-provincial public inquiry into last April’s mass shooting in Nova Scotia.

The departures, offers one police insider, also says a lot about what McLean and Coxon thought about their prospects of landing the top job in Toronto.

Then there’s interim chief James Ramer, who has publicly stated his intention not to apply for the chief’s job but has nevertheless looked the part, saying all the right things to move forward the “bold and progressive” reform agenda promised by the board and Mayor John Tory following Saunders’s exit.

Murray says we shouldn’t read anything into the fact that the “interim” part was removed some months ago from references to Ramer in official police and board correspondence.

“While the Board may have used ‘interim’ initially to make clear that Chief Ramer would perform the role of Chief while a selection process for the next Chief unfolded, this was a description and not a legal title,” Murray says.

But scuttlebutt is that the designation is not an accident. That, in fact, Ramer, who has been in the job since August, had been looking for a one to two-year appointment. Whether he’s just keeping the seat warm for a replacement is another question.

There’s nothing that’s been said publicly to suggest that Ramer may have changed his mind about whether he wants to be chief in the long term. He wouldn’t be the first to do that. Stranger things have happened when it comes to Toronto’s history of selecting chiefs of police.

But right now Ramer looks as good as anyone to follow Saunders. If anything, the board has made a very conscious effort to place Ramer at the forefront of its public relations efforts to sell its agenda for “bold and progressive change.”

On Monday, the board released an update on that, noting the adoption by the force of some 24 of 81 recommendations for reform passed by the board following public consultations six months ago.

The infographic provided with the update identifies the recent deployment of body-worn cameras and new strip search procedures as “additional reforms” adopted by the force. Among the reforms still “in progress” on that list are recommendations related to the criteria that will be used to select the new chief and “building public confidence.”

On that front, there was the suggestion put forward by some on city council following Saunders’s exit, including by former TPSB member Shelley Carroll, about the need to look outside the force for a replacement – that is, if the board and mayor really want to send a signal to the rank and file that it’s serious about culture change.

But longtime policing observer John Sewell suspects the force may have a problem attracting progressive candidates from outside.

Some recent moves suggest a hardening of that pattern under Tory’s tenure. The law-and-order Frances Nunziata, for example, has replaced the more progressive Marie Moliner, whose term expires next year, as vice-chair.

“What has Toronto to offer that other cities do not have?” asks Sewell. “If you are working well somewhere else, why would you want to come here? Certainly, it is not the Toronto Police Services Board.”