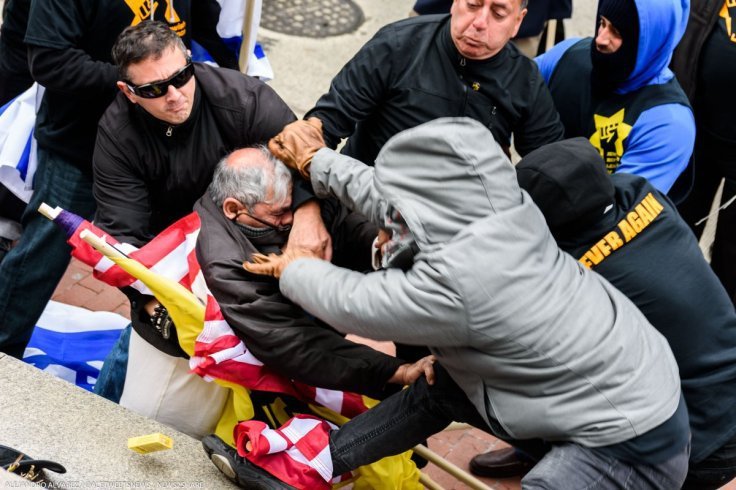 A member of the Jewish Defense League Canada, a group involved in several recent anti-Muslim protests in Toronto, has been charged with a felony count of assault in connection with the beating of a Palestinian-American community college instructor protesting the pro-Israel American Israel Public Affairs Committee (AIPAC) conference in Washington, DC, on March 26. The case is being prosecuted as a hate crime by the U.S. Attorney.

Yosef Steynovitz of Vaughan will appear in court in Washington later this month. JDL Canada members claim they went to the AIPAC conference to confront “anti-Israel gangs” planning to block the entrance to the conference.

Ben Doernberg, another AIPAC protester who says he was “jumped” by JDL members, suffered a concussion. His symptoms were too severe to permit him to have an extended conversation when I contacted him for comment.

JDL Canada national director Meir Weinstein videotaped a message posted on the Facebook page of anti-Muslim group Never Again Canada, (JDL has had its Facebook privileges suspended twice recently for its support of groups promoting “violent behavior”) defending his group’s actions in Washington. He contends JDL members were only trying to make sure anyone who wanted to could get into the conference.

“They found out,” says Weinstein in the video, “that it’s not wise to lay not even a finger on any of us. We don’t have any patience for this nonsense any more. Anyone who’s go-ing to try and raise a fist to us, push us and assault us, we would be glad to enforce a citizen’s arrest when there’s some semblance of cooperation from the aggressor. Unfortunately, we had to resort to a certain level of force, and we made it very clear the days of Jews being attacked and being docile are long over.”

Most of the protesters who locked themselves to the front doors of the conference centre or unfurled a banner inside were affiliated with If Not Now, a Jewish group opposed to Israeli government actions in the Occupation Territories. A recent UN report accuses the Israeli government of imposing an “apartheid regime” on Palestinians and urges other governments to support boycott, divestment and sanctions against Israel.

Who was the JDL protecting, then, from what Weinstein describes as “anti-Israeli, pro-Jihad gangs”?

Weinstein claims in his video that “we met Jewish students from universities in the U.S. who want to get involved with the JDL because their campus life has been disrupted by anti-Israel and antifa gangs. These are the same gangs that are attacking Donald Trump supporters throughout the United States,” he says, before making a plea for financial support. “We’re on the street… literally putting our necks out for you.”

Other video footage from the AIPAC event, however, suggests JDL was interested in little more than intimidation.

One shows another altercation involving JDL Canada “security director” Zaza Vili and another member attacking protesters who were filming as they made their way to the event. Vili can be heard calling one of the two men filming a “racist fuckin’ piece of shit. Hope you die,” before abruptly turning on his heels and challenging the man to a fist fight. The other man with Vili then smashes the video camera.

Pegida Watch Canada, a group set up to monitor anti-Islamic organization PEGIDA, or “Patriotic Europeans Against the Islamization of the West,” describes Vili as “the Dude,” because of his resemblance to the bearded character played by Jeff Bridges in the Coen brothers classic The Big Lebowski. Vili’s Facebook page, which hasn’t been updated since 2012, features a selfie with former Fox News personality Glenn Beck.

When he’s not at his day job (Vili works as sales representative for an international trade show production company), he hangs with white supre-ma-cists from Soldiers of Odin Canada, a Canadian offshoot of a Finland-based group, as he did at last month’s anti-Muslim gathering at City Hall protesting M103, MP Iqra Khalid’s anti-Islamophobia motion. (Coincidentally, one of the sons of the Norse god Odin was named Vili, or “Will”).

After lying dormant for a number of years, JDL Canada has been front and centre at a number of recent anti-Muslim protests, including outside the Masjid Toronto mosque last month.

The FBI designated the JDL’s U.S.-based parent a terrorist group in 2001 after violent attacks by members in the United States and abroad. But the election of Donald Trump and his travel ban on people from seven Muslim countries, seems to have given the group’s political cause – namely, an Israel without Palestine – new life.

Vice President Mike Pence was a keynote speaker at this year’s AIPAC conference. Trump’s choice for ambassador to Israel, his bankruptcy lawyer, David Friedman, is a financial and political backer of Israel’s Jewish-only settlements in the Palestinian territories.

More concerning for local activists is to what extent the assaults in Washington involving the JDL signal a resurgence of the group’s vigilante activities on both sides of the border.

Richard Silverstein is a U.S.-based freelance journalist and blogger for Tikun Olam and Middle East Eye.