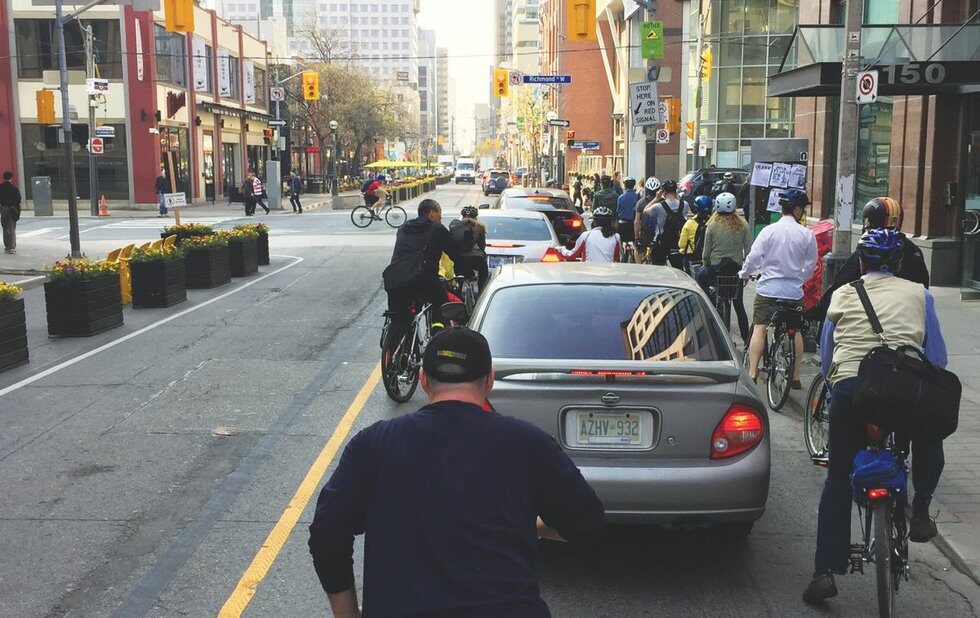 This is not a story about bike lanes. It’s more a story of what can go wrong when the city lets private entities manage public spaces.

Right now in Toronto we are, sadly, just starting to experiment with pedestrianized zones and car-free streets. We have Willcocks on U of T’s St. George campus and Gould on Ryerson’s campus. We’ll soon have Markham in the new Mirvish Village.

The city is also talking about prioritizing transit on King, but we aren’t considering removing a single vehicle lane to do it.

And then there’s John Street, soon to become a “cultural corridor” extending from the AGO to Front. When finished, it will feature widened sidewalks and boulevards, more trees and sloped curbs to allow the street to be used as a “plaza space” for events during road closures. The design calls for one lane for car traffic in each direction.

The rub for cyclists is that there will be no bike lanes on John.

Local councillor Joe Cressy says it’s important to him to keep bike lanes free of obstructions or closures, which is the reason no bike lanes are planned for John.

He calls the corridor a route with “places to go, not just places to go through. Call it whatever you want – it stitches together so many cultural institutions: the CN Tower and AGO, TIFF [Bell Lightbox], Mirvish theatres, CBC, Much Music.”

Only in Toronto would we create a pedestrianized zone that doesn’t make any space for bikes.

Perhaps more important than its cultural corridor designation are its traffic implications: instead of closing down King, one of the busiest transit thoroughfares, for TIFF or Queen for the Much Music awards, you can close down John instead.

On those occasions when John is shut down, the street will also be effectively closed to bikes.

Cyclists don’t get much more than a hair’s breadth on so many roads that I take it seriously when the city designs streets and declares bikes don’t belong. I strongly believe bikes do belong on every street downtown, and businesses in the area appear to agree.

A group of lawyers repping one of the long-standing business owners on Queen is arguing for bike lanes on John.

The group hired its own traffic consultant, and research conducted last September suggests cyclists represent 70 to 75 per cent of traffic on John during morning and evening rush hour peaks.

John is a natural connector. I always take it when I’m going into the core or to the lake from the north. I usually come down St. George/Beverly and then bike over Stephanie and down John, taking the first left after Richmond to hit Simcoe. It’s a quick and natural hookup.

My fight isn’t for bike lanes per se. But I’m especially concerned about the absence of bike lanes or access for those on two wheels because of the current situation at existing pedestrian zones.

Right now, on Gould in particular, there are unofficial (not city-made) signs that order cyclists to dismount, yet the area is used by skateboarders, and has bike racks galore and even a bike pump and DIY station at the nearby Ryerson Student Centre.

It’s also a much safer and saner alternative to Dundas.

If my choice is 1) nice, slow, safe pedestrian zone, or 2) Toronto’s busiest downtown intersection with zero curb space for cyclists, I’m choosing 1. And yes, I’ll dismount if there’s a farmers’ market or some other busy event on Gould – obviously!

When I approached the office of the local bike-friendly councillor Kristyn Wong-Tam about the “Cyclists dismount” signs on Gould – and the overzealous enforcement by campus security – Eddie LaRusic, her adviser on planning and constituency issues, told me that since bikes are considered vehicles under the Highway Traffic Act, the city is “compelled” to restrict their access in pedestrian zones.

But how can a private entity, namely the university, be allowed to decide who uses a public street?

The applicable bylaw dictates that the university “manage” the space, but the bylaw could easily be amended to say that bikes are allowed. And it should be.

In the meantime, as long as the city continues to let private entities “manage” our pedestrian zones, we will have overzealous private security folks speaking to cyclists aggressively, shouting, “Get off your bike,” and the like.

This is not encouraging for cyclists.

We must acknowledge that we do not yet have the proper grid of bike lanes needed not only to accommodate existing cyclists, but to encourage cyclists of all levels to ride to work or school. Less experienced and slower cyclists need slower streets as connectors.

We need to ease congestion, and having more people bike on short trips downtown has proven helpful in other cities around the world.

“It is great to see the city doing some more meaningful pedestrian improvements. Nevertheless, accommodating people travelling by bike in all new corridor projects is only a natural progression for a city like Toronto interested in moving people rather than cars.”

Asked if we would ever see a true car-free pedestrian street on John, Cressy says, we can’t “let perfect be the enemy of the good.”

But who wants a cultural corridor that doesn’t include bikes? I mean, Bill Murray and Rachel McAdams like to ride bikes when they’re in Toronto for TIFF, don’t they?