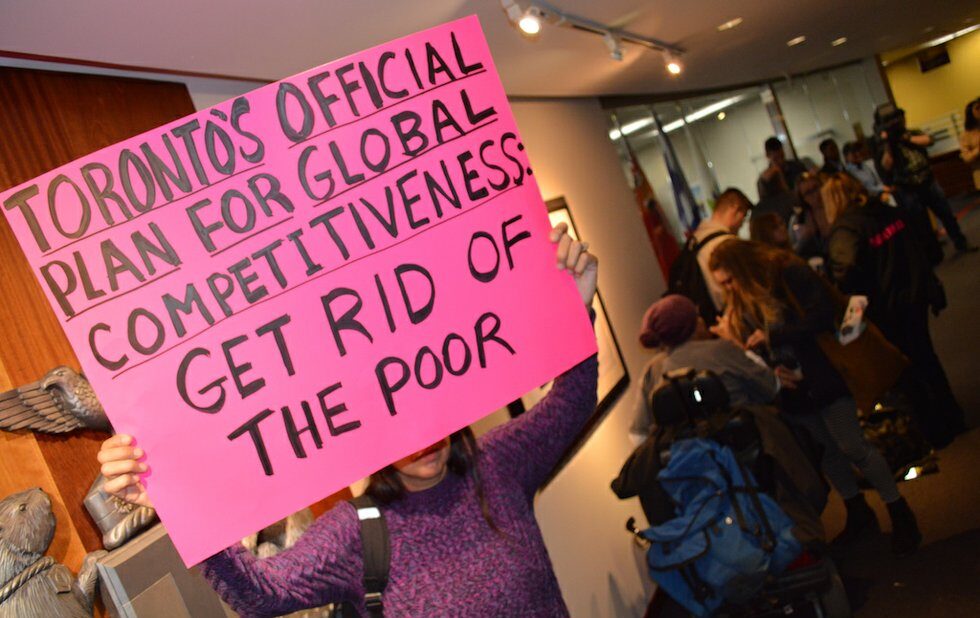 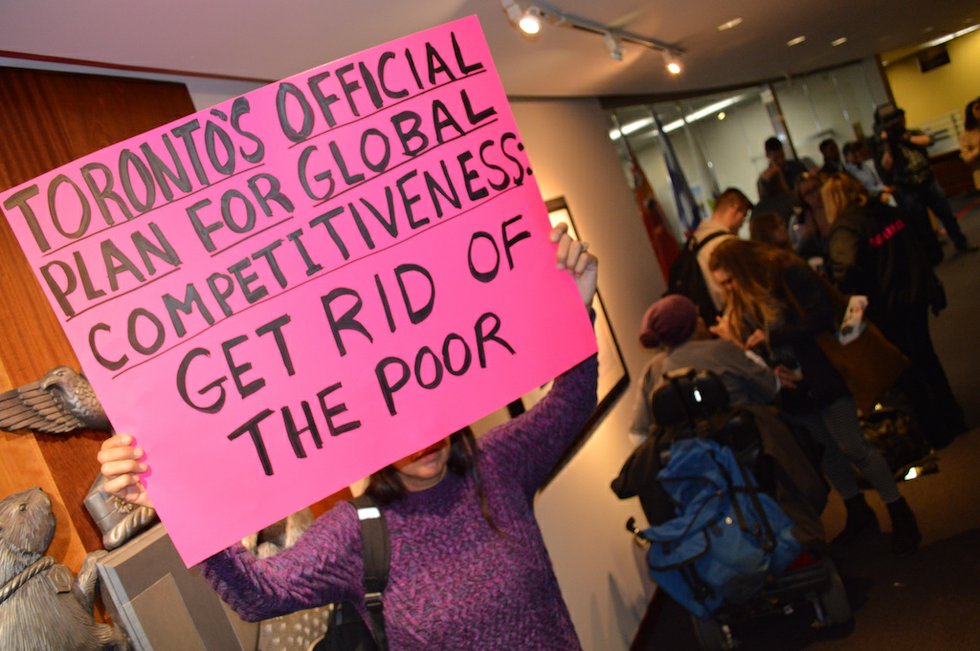 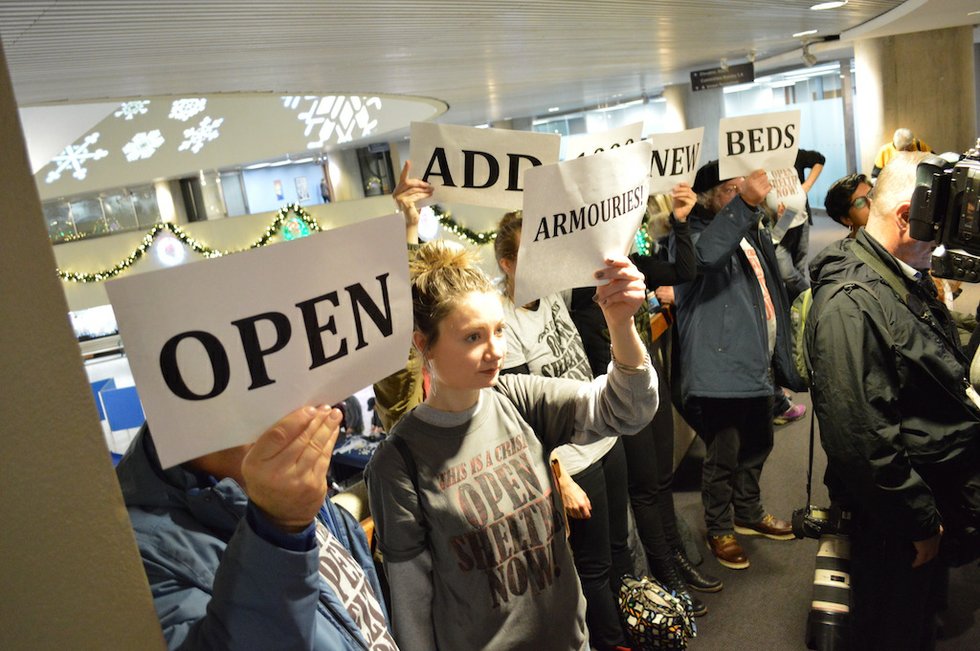 On December 6, about 200 anti-poverty activists and members of the community turned up for council’s vote on opening up more shelter spaces after the Community Development and Recreation Committee voted to ask Mayor John Tory to declare an emergency in the shelter system and open up the Moss Park and Fort York armouries. The committee’s recommendations to council included adding 1,000 new shelter spaces.

It was the city’s poverty reduction advocate, Councillor Joe Mihevc, who tabled the motion at committee on November 20. So there was hope that finally a system beleaguered by years of overcrowding would finally get some relief.

At council, however, Mihevc supported a proposal put forward by Tory to add 400 beds to existing shelters and take the opening of armouries off the table.

Councillor Kristyn Wong-Tam had trouble holding back tears when she tried to gain support for opening the armouries with amendments to Mihevc’s motion. Wong-Tam’s amendments didn’t carry even though she indicated to the mayor and council that Spadina-Fort York Liberal MP Adam Vaughan had reached out to her office (in the same riding) to say that the Department of National Defence was prepared to talk about using the armouries for shelters. They have been opened by mayors on at least three previous occasions to accommodate the shelter overflow but Tory wasn’t prepared to entertain the idea. 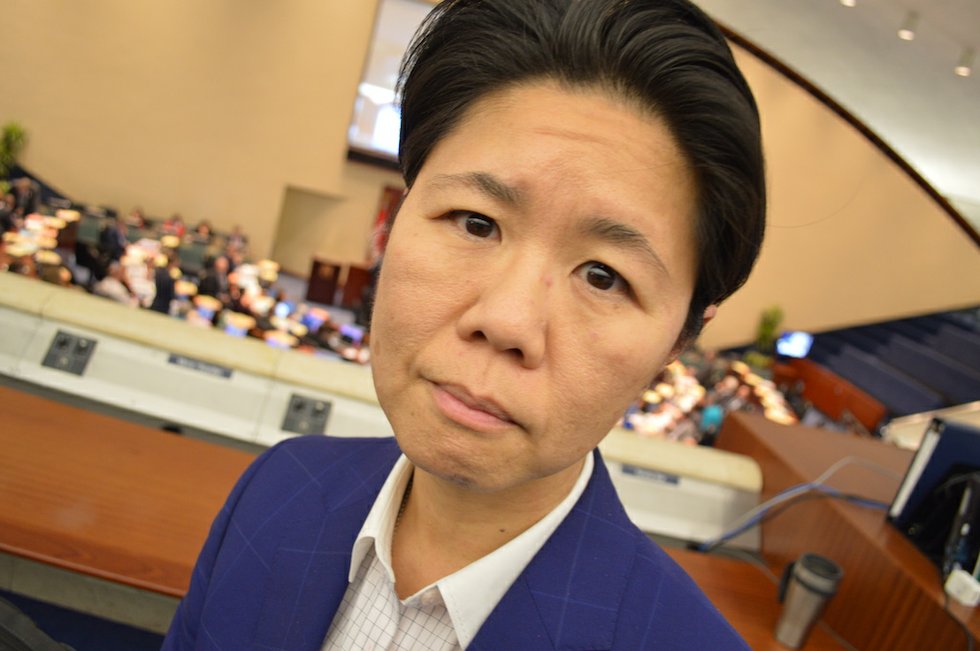 “I understand that some people thought it was a pull back,” Mihevc said after the vote. “What I say to them is that you have to give us a chance to fulfill what we committed to, a thousand beds and a plan for a thousand new temporary and long-term shelter beds over the next year with an investment of almost $100 million of new money.”

Gaétan Héroux, an anti-poverty activist in the Sherbourne Dundas area for 30 years, says that the mayor’s proposal to add more beds to existing shelters is dangerous for a system that’s already overcrowded.

“We’re [already] talking about people being turned away on a daily basis from shelters,” says Héroux, “and leaving people in chairs and on concrete floors all night long sometimes 40 to 50 people. We’re talking about shelters that were meant maybe for 20 or 30 people that have 60 to 80 people staying there. We have a crisis.”

Drop-in centres will also be expected to provide more spaces under Tory’s proposal.

Patricia O’Connell executive director of Sistering, a 24-hour drop-in for homeless and vulnerable women, says the mayor’s plan is unhealthy and unsafe. O’Connell says Sistering, which is funded by the city to provide space for 20-30 women, is typically at capacity – which is 50 women and sometimes as many as 65.

“Twelve people get to sleep in a reclining chair, the rest get mats or they get to sleep on the concrete floor.” She called the mayor’s plan “wrong-headed.”

Susan Bender, who runs the Toronto Drop-In Network, says she’s concerned the unique role played by drop-in centres as temporary respite and referral centres is being lost by asking them to house more homeless people. Bender says she’s furious at the mayor for not consulting front-line workers and the street-involved community.

“It’s really disappointing, it’s enraging to hear a mayor completely dissing the perspective of people on the ground,” says Bender.

In a recent CBC Radio interview, Tory told Metro Morning host Matt Galloway that the view of anti-poverty activists on the need to open armouries, in particular that espoused by the Ontario Coalition Against Poverty (OCAP), shouldn’t be taken “as gospel. I’ve had advice from our professional public service experts saying that the armouries are well down the list of preferred options, [but] that somehow this means that I’m not doing my job.”

Outside in the late afternoon of Nathan Phillips Square after the vote, OCAP organizer AJ Withers vows to continue to keep up the pressure.

Council’s decision is a far cry from the immediate action on the city’s shelter crisis activists were hoping for following the disappointment over the Liberal government’s long-anticipated National Housing Strategy announced November 22.

In front of a housing development in Lawrence Heights, Prime Minister Justin Trudeau, declared that “housing rights are human rights,” and announced the feds will dole out $40-billion over 10 years to pay for new social housing, repair old units and provide up to $2,500 in annual rent supplements for vulnerable families. But activists say the supplements will only put money in the pockets of landlords when it’s more housing that’s needed. And that the government’s definition of affordability is out of the reach of low-wage earners.

On the same day as the PM was making his announcement, protesters were assembled across town at Allan Gardens as part of a National Housing Day of Action.

There, OCAP organizer Yogi Acharya told the gathering that all three levels of government have been playing “a revolting game of political dodgeball with no one picking up the tab of fixing social housing,” since the federal Liberals under Jean Chrétien downloaded the responsibility for housing to the provinces, and the provinces downloaded it to municipalities.

Opal Sparks, a 60-something former social housing tenant who never misses an OCAP action, says, “One of the things that continues to alarm, anger and depress me is watching as I go by where I used to live, social housing getting boarded up as people are moving out.”

As OCAP organizers marshalled the crowd at the edge of the park in preparation for a march to Finance Minister Bill Morneau’s constituency office, the Raging Grannies sang to the tune of a familiar seasonal ditty:

The weather outside is frightful

On the streets it’s not delightful