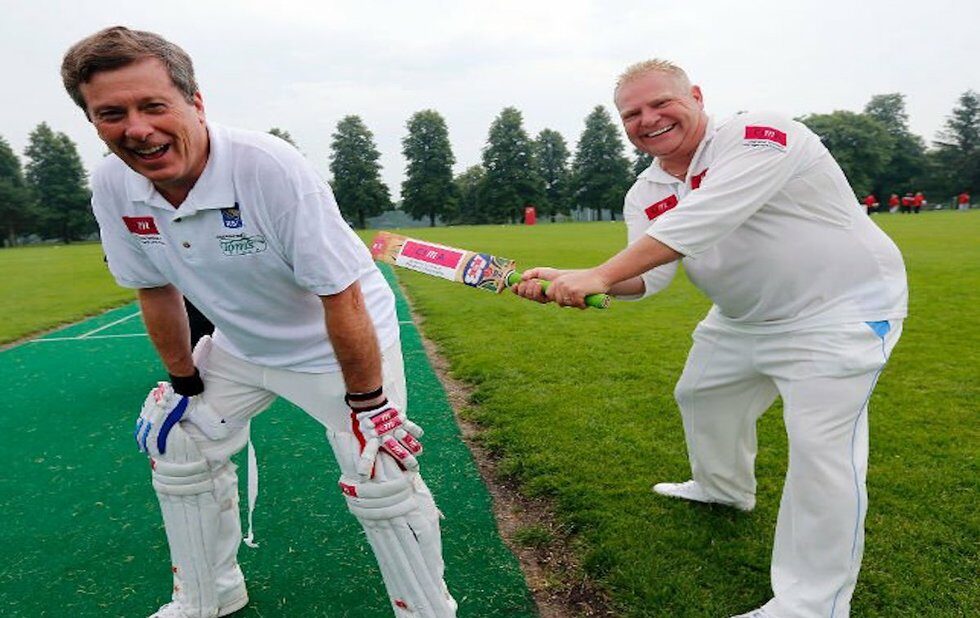 Gotta hand it to Doug Ford – no one can turn BS into sound bites of gold for the populist hordes like he can.

There he was waxing philosophical on the subject of democracy at a press conference called Monday afternoon (September 10) to respond to Justice Edward Belobaba’s decision to put a stop to his plan to cut the size of Toronto council in half from 47 to 25 members. Belobaba found that the province’s legislation violated the freedom of expression provisions of the Canadian Charter of Rights and Freedoms.

No matter. The Ontario premier, whose autocratic moves have already led to a number of lawsuits against his newly minted government, announced he will take the extraordinary step of invoking the Charter’s notwithstanding clause to override Belobaba’s decision.

Overriding the Charter (the notwithstanding clause has only ever been used by three provinces, and never in Ontario) when your government has been found to have violated the constitutional rights of voters is something that’s only supposed to happen in dictatorships. Ford laughed off that suggestion by one reporter.

Ford has his mandate – the fact that he won the June election – and true to form, he didn’t rule out using the clause in the future, maybe even on his government’s decision to reverse the sex-ed curriculum, which is also the subject of a court challenge.

“There was an election. That’s what democracy is. You fulfill the mandate you promised the people,” he said.

Only, Ford didn’t actually run on a platform to cut Toronto council in half. When that detail was pointed out, his comeback was that he’s the one who was elected, whereas Belobaba was appointed.

Ford feels it’s “shocking” that a judge can reverse a government decision.

Belobaba’s decision was an unforgiving rebuke of Ford. His 20-page finding called the Ford government’s move to impose new rules in the middle of an election “antithetical to the core principles of democracy.” There’s that word again.

Contrary to Ford’s suggestion, Belobaba’s decision does take into account the delicate business of the courts overturning decisions of elected governments. But here, too, he ruled that the Ford government “clearly crossed the line.

Belobaba noted that “because Bill 5 almost doubled the population size of city wards from an average of 61,000 to an average of 111,000, it breached the municipal voter’s right to cast a vote that can result in effective representation.”

And that “passing a law that changes the city’s electoral districts in the middle of its election… undermines the overall fairness of the election.”

Worse still, Belobaba suggests the province’s lawyers were flying without a script. Outside of a press release and statements from Hansard made by the premier in the legislature, there was little entered as evidence to support the province’s case.

Mayor John Tory, meanwhile, is seeing his election chances flash before his eyes as he watches Ford run roughshod over Toronto.

Right now he’s looking like he didn’t do enough to protect the city when everything was on the line. Like when Ford first announced his intention to introduce Bill 5, the so-called Better Local Government Act, Tory suggested a referendum to deal with the issue, even though there had been years of consultation and two legal challenges to redraw council’s boundaries.

The mayor was also lukewarm about taking the province to court over Bill 5 until it became clear to his political strategists that not supporting one could cost him dearly at the ballot box.

Tory suggested in a series of tweets (since deleted) shortly after Belobaba’s decision that he had “led the charge” on Toronto’s legal challenge.

Not exactly. The city’s lawyers didn’t, for example, raise the constitutional argument in court. That was left to the dozen or so intervenors in the case, among them a number of candidates.

Tory is doing plenty of ass-covering. He knew of Ford’s plans before they were announced. Tory says it came up in a meeting with the premier. But Tory says he didn’t think Ford was serious about it. The truth is, however, that Tory has historically supported the idea of cutting the size of council, adopting Ford’s familiar talking point that he’s never met a person who favours more politicians.

When Councillor Mike Layton called the mayor out on what he knew and when, Tory got his back up at the suggestion that there might have been some quid pro quo between he and Ford.

There’s some evidence to suggest there was.

Starting with the fact Bill 5 practically cleared the way for Tory to run uncontested until Jennifer Keesmaat decided at the last minute to jump into the breach. Bill 5 moved the deadline for council candidates and trustees to register to run to mid-September, but the deadline for mayoral candidates – July 27 – didn’t change. So anyone who wanted to challenge Tory was left with little more than 24 hours to decide to register. The PCs tabled Bill 5 the following Monday, July 30.

Keesmaat, filed minutes before the 2 pm deadline in what she described as an “impromptu decision” borne out of Ford’s move to cut council in half.

In the days before that, there had been rumours that Blayne Lastman, son of the former North York and Toronto mayor Mel, was considering a run against Tory. Speculation was fuelled when a meeting Blayne had with Ford and his environment minister, Rod Phillips (Mel’s former chief of staff) was splashed all over Twitter. Several media outlets reported an imminent announcement, and then… crickets.

A Lastman run seemed preposterous at the time. Why would the PCs want to run another candidate that would split the conservative vote?

It certainly looked like a bad joke until you realize the historical anti-pathy between Ford and Tory that’s still lingering from Ford’s 2014 loss to Tory for the mayoralty.

I wouldn’t be overstating it to say that it has kept Ford up at night. Ford talked revenge in John Filion’s book, The Only Average Guy: Inside The Uncommon World of Rob Ford, in which he  is quoted as saying, “I’m going to latch on to his ass. He’s going to take off the sheets in bed at night and find my teeth wrapped around his nuts.” Now that Ford’s premier, he’s the one calling the shots.

And he has big plans for Toronto besides shaping a council in his image. He also wants to take over the TTC. And, his latest affectation, mess with plans to turn Ontario Place into a park.

With Tory caught between his allegiance to the PC party (remember, Tory is a former PC leader) and defending Toronto, whatever quid pro quo there may have been, cracks are starting to emerge in that agreement.

Ford hinted at that during a tangent in his press conference about how dysfunctional council has become, saying that Tory “says one thing behind closed doors and another thing in public.”