With relations with the union representing Toronto police at a new low and Premier Doug Ford bent on reversing hard-fought gains against carding, which way will Tory turn on efforts to modernize the force? 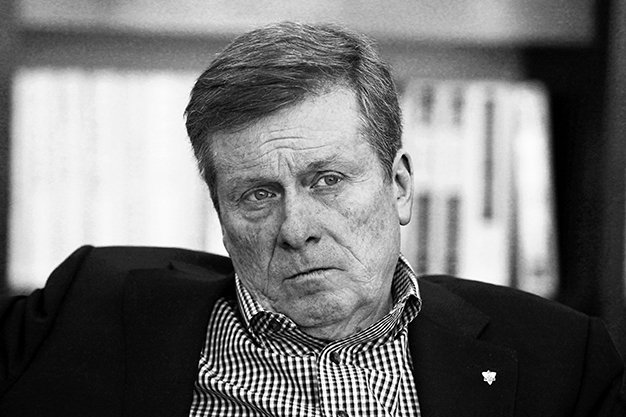 To Mayor John Tory it must seem like a bad case of déjà vu all over again.

The summer’s gun violence has inflamed some of the same old wounds that have bloodied police-Black community relations for as long as most of us can remember.

But with an election looming and relations with the union representing Toronto police at a new low, which way will Tory turn on efforts to modernize the force in the face of brash police union resistance?

It wasn’t supposed to be this way.

Shortly after he was elected four years ago, Tory waxed philosophical on the importance of positive relationships between the Toronto Police Services Board, the police chief and the association representing front-line officers.

He said on November 27, 2014, “I understand the fact and accept that there will always be some healthy tension. However, without any attempt to assess blame, I believe those relationships have become increasingly polarized on all sides and this has led to a lack of progress on achieving our goal of safe, effective policing and of maintaining the confidence of the entire community in our police services.”

Relations between the board, then Chief Bill Blair and police union president Mike McCormack were frayed back then, too. And Tory’s comments were widely viewed as a criticism of the board over its efforts to rein in carding and the spiraling costs of policing services as set out in the heavyweight Transformational Task Force’s Way Forward report.

Within a few months after taking office and joining the board, Tory had got himself a new police chief and a board chair of his choice.

The new chief, Mark Saunders, was hailed as “a cop’s cop” and his appointment over the more progressive Peter Sloly was welcomed by McCormack and the police union, who had lobbied aggressively for his selection.

Back then, Tory was considered to be close to McCormack – maybe a little too close. The association had, in fact, endorsed him when he ran for mayor against David Miller, which led to the board establishing a policy prohibiting members of the Toronto police from participating in political activities.

So far, the association has refrained from flouting the policy, even though its public position has been that the policy does not apply to them.

But times have changed, and Tory is being called a “turncoat.” And the “cop’s cop” is now Tory’s “puppet.”

Sergeant Mark Hayward, a former member of the much-reviled Toronto Anti-Violence Intervention Strategy (TAVIS), wrote a public letter to the mayor, holding him responsible for the rise in gun violence. He blamed Tory’s opposition to carding – the mayor had supported the practice in the past – and his support for a three-year freeze on police hiring.

Hayward demanded that Tory resign from the board.

McCormack backed Hayward. In response, his former friend Tory has claimed that the letter is “part of a campaign.” In uncharacteristically blunt language, Tory accused the association president of not being a “partner” and of engaging in a “dangerous set of tactics” against the force’s modernization efforts.

Tory now says that McCormack “has fought us every step of the way,” resulting in “two lost years” since the board and Saunders accepted the Way Forward report.

And police have found a new ally in Premier Doug Ford, who has promised to invest millions in policing to fight gun violence and halt the implementation of new regulations on carding, among other police oversight reforms, passed by the government of Kathleen Wynne.

In the Throne Speech, Ford assured that cops “can count on your government to respect the men and women of Ontario’s police services by freeing them from onerous restrictions that treat those in uniform as subjects of suspicion and scorn.” He also promised that police will “have the tools, support and resources they need to enforce the law and protect innocent families from the menace of drug-, gun- and gang-related violence.”

These are ominous signs that discredited and discriminatory practices like carding and hyped police presence in minority communities through projects like TAVIS will be back.

Hayward and McCormack are not the only ones to claim that removal of these practices have tied the hands of the police. Peel police chief Jennifer Evans, one of Ontario’s senior police leaders, took little time after Ford became premier to publicly criticize the provincial regulation on carding, something that police chiefs and police unions in Ontario, she says, had never accepted to begin with.

Continuation of regulations on carding (currently under review by Justice Michael Tulloch) and implementation of some of the key recommendations of the police board’s transformational task force report are, by Tory’s own admission, stalled because they require the police association’s agreement.

How will Tory balance the combined positions of Ford and the police to reverse hard-fought gains against the very strong demand of Black and other racialized groups that these reforms be preserved? What will he give up from the modernization plan to gain McCormack’s cooperation? Facing re-election, Tory is confronted with a challenge.

Alok Mukherjee is a distinguished visiting professor at Ryerson University. He served as chair of the Toronto Police Services Board from 2005 to 2015.