Of “thugs,” “gangsters” and “sewer rats” why John Tory’s language on gun violence is a problem

Over the past weeks, Mayor John Tory has used terms such as sewer rats, profoundly anti-social, thugs and gangsters in. 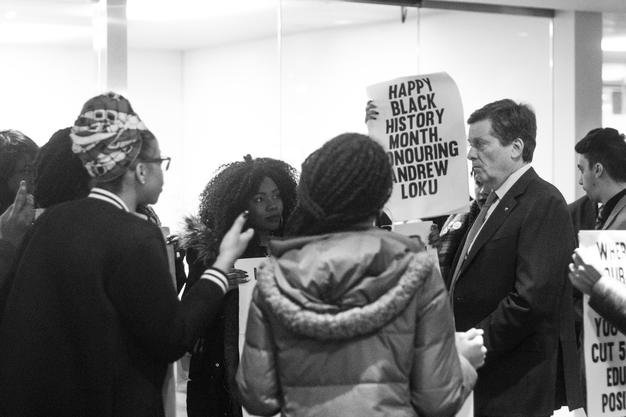 Mayor John Tory is confronted outside his office by Black Lives Matter Toronto members over the police shooting death of Andrew Loku.

Over the past weeks, Mayor John Tory has used terms such as sewer rats, profoundly anti-social, thugs and gangsters in reference to specific acts of gun violence in Toronto.

The mayor has said that he is simply labelling people who commit bad deeds with the right words.

But, as others have rightly pointed out, the mayor has not used these words to describe other violent situations in Toronto. For example, to our knowledge, Mayor Tory has not called alleged serial killer Bruce McArthur a thug, or van attacker Alek Minassian a sewer rat.

The young men Mayor Tory has referred to as thugs are Black. It is reasonable to conclude that Mayor Torys word choices come down to race.

When politicians call young Black men thugs, they are not doing so in a vacuum. They are using this language in a city with a history of well-established institutional anti-Black racism, where the targeting of Black individuals and communities through practices such as carding has done well-documented harm, and at a time when reactionary politicians around the world are zeroing in on racialized groups for discrimination and exclusion.

The word thug has been specifically identified by academics and journalists as the kind of language politicians use when they want to convey racist ideas, but do not want to be accused of racism.

There is ample evidence of the connection between dog whistle language and discrimination. For example, a recent study published in the peer-reviewed Journal Of Human Behavior In The Social Environment demonstrates a link between words such as thug and subsequent violence against racialized communities.

The repetition of such words by city leaders stokes racism and will lead directly to increased suspicion, surveillance and exclusion for Black communities across the city. As demonstrated by decades of scientific research, this will in turn, and inevitably, impact health.

We in no way wish to diminish the losses experienced by families and communities. We do not believe, however, that the use of terms like thug by city leaders is a constructive response.

As health care providers and public health researchers, our duty is to prevent illness and contain harm. The use of such language by city leaders causes harm. It is a public health problem. It is preventable. And it needs to stop.