Icy cold gusts of whipped-up snow are blowing city workers across Nathan Phillips Square. On the far corner at Queen. 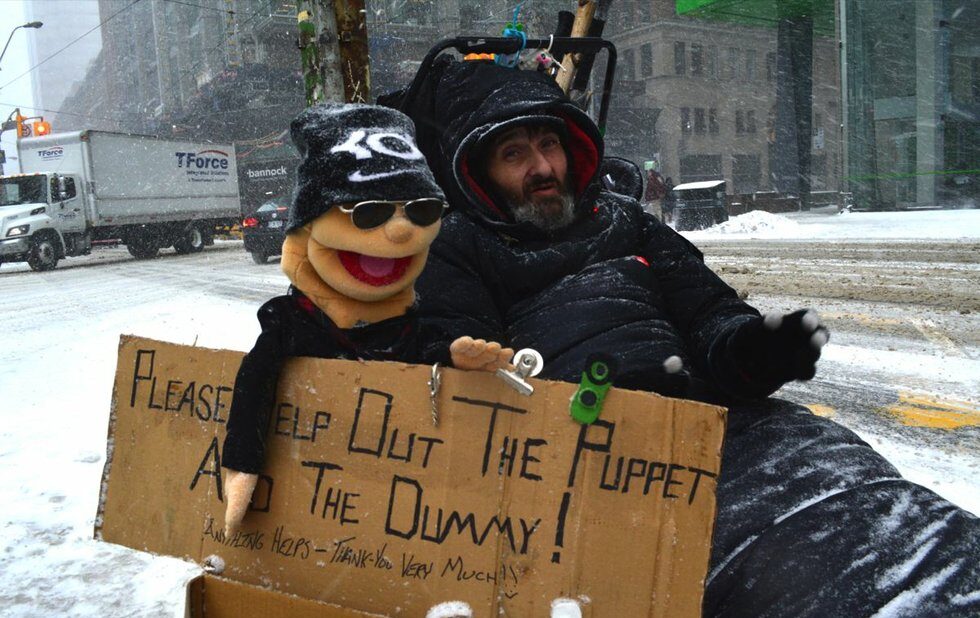 Icy cold gusts of whipped-up snow are blowing city workers across Nathan Phillips Square. On the far corner at Queen and Bay, Blair Wall is snugly zipped into his thermal sleeping bag, eyeing pedestrian traffic going by in all directions. Next to Wall is a grinning Muppet holding up a cardboard sign that reads, Please help out the puppet and the dummy.

Wall hitchhiked from Goose Bay, Labrador, a couple of years ago after having been promised work and housing in Toronto. When that didnt come through, he fell into the shelter system, coming [from] right out of the bush. I go to Peter Street (intake) and they refer me to the worst of all places: Seaton House.

The way the streets work, he says, is that top dog usually wins. And if youre not one of the top dogs, you dont eat. And then youre forced to go and do stuff that you dont want to do just to survive. Ive seen a lot of stuff. Im lucky to be alive.

A passerby slips him a five-dollar bill. Hes thankful because the little bit that the city has done isnt really that much.

On January 30, city council considered The Mayors 1st Key Matter: Implementing The Housing Now Initiative, as the first order of business. Tory campaigned on affordable housing and is tabling a preliminary report from city staff on the way forward. The document is a technical compendium of requests, directives and preliminary budget proposals to kick-start an affordable housing plan by opening up 11 city properties to developers.

Layton says the city actually has the ability to activate far greater resources than the private sector to build affordable housing. We can make it so that we build the housing, manage that asset and own that asset, and ensure deeper affordability because we dont have to siphon off profit to a board.

But Gord Perkss amendment, to ensure that there will be at least one public sector bid to develop and operate the rental housing at one or more Housing Now sites is voted down.

Housing Now carries, but not before Tory offers that he’s offended by charges that he and city managers have done nothing to take the pressure off. Tory reminds councillors of the several hundred beds added to the shelter system during his term in office. But the street-involved community and advocates have been petitioning the city for 2,000 immediate new shelter beds in a campaign that started two years ago.

Councillor Kristyn Wong-Tam distributes a 2018 United Nations declaration on housing, before a vote on her motion advocating for a co-ordinated emergency, intergovernmental, human rights-based response to homelessness.

Canada not only adopted the historic 1948 UN Universal Declaration of Human Rights, which but McGill prof John Peters Humphrey was its principal drafter. The declaration guarantees the right to a standard of living adequate for the health and well-being… including food, clothing, housing and medical care and necessary social services.

On that front, the citys legal team advises councillors that since adopting the Toronto Housing Charter, Opportunity For All, in 2017, the city recognizes that all residents should have a safe, secure, affordable and well-maintained home. However, international human rights law references to the right to adequate housing do not create legal obligations on the City.

Bruce Porter, executive director at the Social Rights Advocacy Centre and chief advisor to the UN Rapporteur on the Right to Housing, argues that although the right to housing cant be enforced in Canadian courts, these [UN] obligations are considered binding under international law, and all levels of government including the city are expected to comply with these obligations in good faith.

The vote on Wong-Tams motion to declare homelessness a disaster akin to a municipal emergency is a shit show caught up in procedural wrangling before its voted down 18 to 7. (See sidebar below). A couple of Wong-Tams amendments survive. But a second motion to affirm housing as a human right and take appropriate measures to address homelessness as a human rights crisis, also fails by a vote of 14-11.

A call for an emergency meeting between Ottawa and Queens Park and persons who are homeless and precariously housed in Toronto and their representatives to develop an urgent plan of action, is downgraded to an urgent meeting of city managers with housing providers to identify short- and medium-term actions to increase supportive housing options to immediately assist people to exit homelessness, thanks to an amendment tabled by the citys housing advocate, Ana Bailao.

According to the citys own numbers more than a hundred homeless people die in the streets of Toronto every year. The average lifespan of a homeless person is 48 or 49 years of age. That should qualify as a disaster, says Cathy Crowe of the Shelter and Housing Justice Network.

She notes that the city defines as an emergency a situation that constitutes a danger of major proportions to the population. And right now there are roughly 9,000 people in conditions of despair and homelessness that qualify as a disaster.

But the majority of council seems deathly out of touch.

New shelter and respite spaces fill up as soon as they open. To head off extreme weather emergencies the city ordered four warehouse-style domes to serve as 24-hour respite centres four temporary quasi-shelters with beds and a capacity of 100. So far only one is operational. Tory called off construction of the Etobicoke dome last summer after newly-minted premier Doug Ford called to make it known to the mayor that there would be no respite centre in his backyard. The other two respite centres are not expected to open before spring.

Perks calls the citys response a collective failure. Were actually building refugee camps in the city of Toronto because our housing system has failed so spectacularly.

And so goes the debate over Torontos homelessness crisis.

On January 30, city council followed Mayor John Torys lead and voted 18-7 against declaring a state of emergency on the citys homelessness crisis. And save for one or two exceptions, the urban-suburban divide over the issue came starkly into view.