Toronto’s homelessness crisis: How does John Tory sleep at night?

The mayor announced on the weekend that the city will "spend what it takes" to fix potholes, but what about homelessness – does he even care? 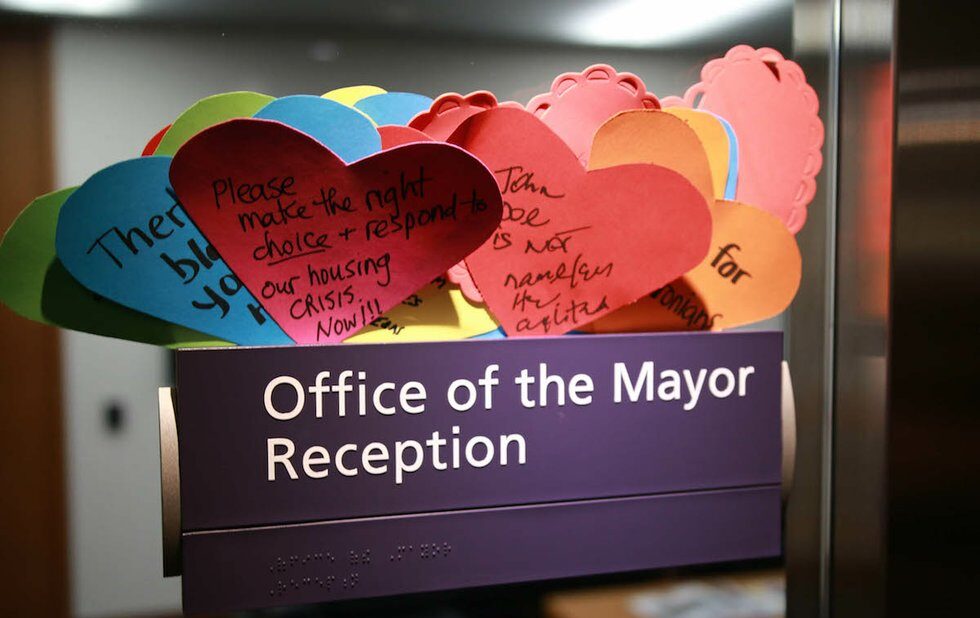 Homelessness is a crisis in Toronto, but Mayor John Tory doesn’t seem to know it.

On February 12, after a service at the Church of the Holy Trinity to add the names of six more people who died on the streets in January to Toronto’s Homeless Memorial, a delegation led by street nurse and longtime affordable housing advocate Cathy Crowe walked to the mayor’s office to meet with him about doing more to end the emergency. The event was dubbed Have A Heart For The Homeless March.

Crowe had announced her intention to visit the mayor a week earlier in an open letter highlighting the mounting homeless deaths in Toronto. There are now close to 1,000 names on Toronto’s Homeless Memorial.

Tory never acknowledged the letter. And neither would he meet with Crowe’s delegation when the group arrived at his office. The mayor was in “scheduled meetings,” according to a spokesperson. Instead, Crowe and a few others were allowed into the waiting area of his office where they presented their concerns to one of Tory’s assistants, who stood quietly behind a desk. They left messages written on heart-shaped pieces of paper for the mayor.

Tory’s ongoing dismissiveness is problematic. It could be that he’s oblivious. He’s said homelessness can be fixed with proper mental health. Cure the mind and you end homelessness, goes Tory’s logic.

Mental health issues partially explain why homelessness exists. But homelessness, as the term implies, is about not having a home. People don’t choose to be on the streets. The reality is that, while the mayor blames others, the crisis is making some landlords, land speculators and owners of luxury properties very wealthy. It’s also true the city has pursued an agenda of cuts under Tory’s watch that has left social services underfunded.

Perhaps the mayor is just being wilfully blind. He has shown a similar blind spot on anti-Black racism. Sometimes I wonder. It’s impossible not to know Toronto is in the midst of a housing emergency. Maybe Tory has a weak conscience that doesn’t bother him enough to lose sleep at night. Because if he did have a moral sense of right and wrong, turning away from this difficult and heart-wrenching reality would not be an option.

The mayor is not actually obliged to help the homeless. Even the UN Declaration of Human Rights signed by Canada and guaranteeing housing as a human right, is not legally binding.

But that is part of the problem. Ending homelessness shouldn’t be a matter of law. It should start at once as a matter of compassion, attuned to a deeper awareness. Does the mayor even care? Tory announced on the weekend that the city will “spend what it takes” to fix potholes. But what about homelessness?