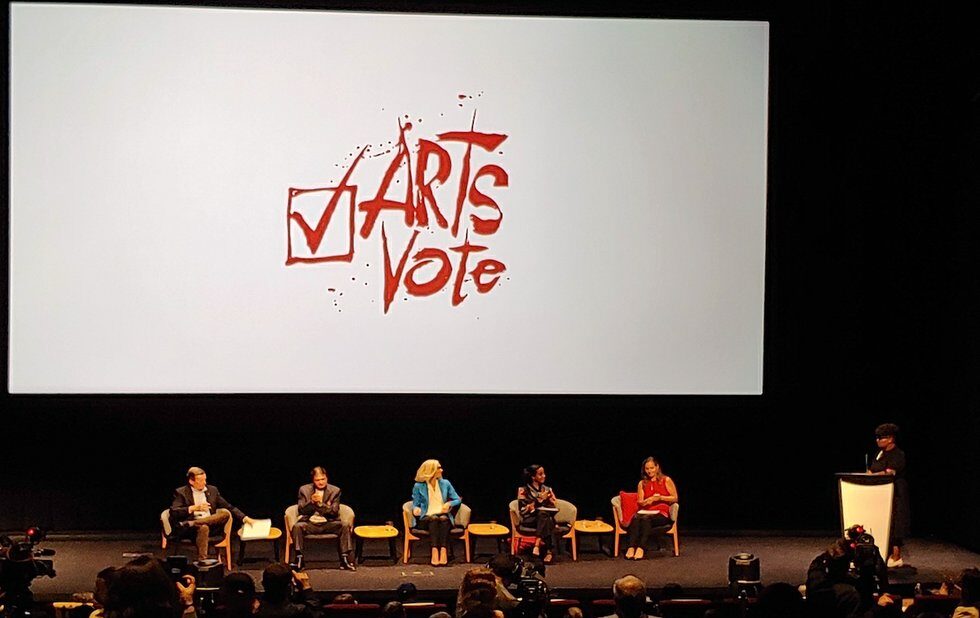 The first mayoral debate of the 2018 municipal election was respectful, thoughtful and loaded with talking points. It doesn’t get more Toronto than that.

Moderated by Maxine Bailey, TIFF’s VP of Advancement, and held in Cinema 1 of the TIFF Bell Lightbox, the ArtsVote 2018 debate offered a chance for five mayoral candidates to introduce themselves, lay out their bona fides – and briefly cringe in embarrassment as former Rebel Media personality and far-right mayoral candidate Faith Goldy, who spent Saturday night taking pictures with Premier Doug Ford at Ford Fest, crashed the event. She was escorted out of the venue by police and security moments after taking to the stage and introducing herself to the room.

It was a stunt, and an obnoxious one, but Bailey quickly restored order. Team Faith supporters packed up and left moments later, and we shall not speak of them again.

With the debate underway, the shape of the election became clear: Mayor John Tory wants to run on his record, and Jennifer Keesmaat, Tory’s former chief planner, wants to run against it, calling her former boss out repeatedly and often over the course of the hour debate for failing to deliver on his SmartTrack transit plan, on housing, on any number of issues over his four years in office.

Tory mostly ignored the attack lines, touting his accomplishments in raising the city’s per-capita contribution to arts funding to $25 per capita, forging corporate partnerships to fund Nuit Blanche, build The Beltway and launch plans for The Meadoway, a 16-kilometre park along the Hydro Corridor. The mayor described himself as an active ambassador for city culture.

He did snap back at Keesmaat once, saying that she was in favour of his SmartTrack plan to criss cross the city with heavy rail before she decided to run for mayor. This seemed slightly disingenuous, since it presumes she would have been able to speak out against the plan while in his employ. But hey, politics.

At every opportunity, Keesmaat steered her answers back to her core campaign planks – better transit, 100,000 units of affordable housing and, notably, a willingness to stand up to the chaos engine that is Doug Ford.

On that front Tory spoke more than once about his willingness to negotiate consensus in difficult situations, though Keesmaat always countered with the reality of Tory being ultimately answerable to Ford.

The three other candidates sharing the stage, Sarah Climenhaga, Saron Gebresellassi and Gautam Nath, each tried to carve out some space for themselves as viable contenders. Climenhaga and Gebresellassi both spoke eloquently about the importance of supporting the arts in a city as large as Toronto.

Gebresellassi wants to go even further in terms of housing reform, saying she’d declare a state of emergency in the city. She challenged the other candidates to triple the projected per-capita arts target to $75, rather than the agreed-upon $50.

Nath, for his part, didn’t seem to have much to offer beyond a strongly held belief that corporate sponsorship and aggressive branding would allow Toronto’s arts culture to be recognized on the global stage, and that we’re not pushing our own talent strongly enough.

In the end, the contest came back to Keesmaat denouncing Tory for being “reactive,” responding to each new crisis as it comes and doing nothing to prevent them beforehand.

“As the mayor, you stand up and engage with the problems this city faces,” she said.

If Tory had a good comeback for that one, I didn’t catch it.