NOW MagazineNewsJulian Fantino turns over a new leaf on marijuana

Julian Fantino turns over a new leaf on marijuana

Toronto's former chief is not the only ex-cop or politician to want to profit from legal marijuana, but he may be the biggest hypocrite among them 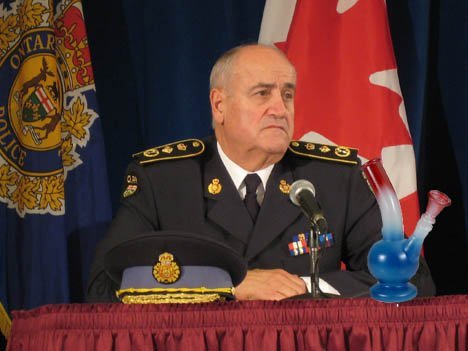 Julian Fantino has turned over a new leaf on marijuana.

The former Toronto police chief, OPP commish and Harper-era cabinet minister will serve as executive chair of something called Aleafia Inc., which describes itself on its website as a “total health network.” The company will essentially act as a middleman that connects prospective medicinal-marijuana users with licensed growers, according to the Globe and Mail, which broke the story over the weekend – and then promptly put it behind a paywall knowing full well the clicking frenzy Fantino’s association with legal weed would touch off.

Fantino’s not the only former top cop or politician to try and profit off legal weed – the list is a long one – but he may be the biggest hypocrite among them.

You don’t have to look far to understand why Fantino’s involvement in the burgeoning bud biz might be difficult to wrap your head around. Just google the words “Julian Fantino” and “marijuana,” and what comes up is hit after hit of a career (both in politics and in policing) dedicated to a level of reefer madness that’s had no equal. This is the dude who once likened decriminalizing weed to legalizing murder.

As recently as the last federal election, Fantino was claiming in an interview with the Toronto Sun that legal pot would prove a boon for organized crime, despite evidence to the contrary (like Colorado where marijuana is legal). Back then, he charged that the Libs’ plan to legalize weed included opening marijuana cafes. Horrors. Fantino also distributed flyers in his Vaughan riding in 2014 claiming Justin Trudeau planned to make pot available to minors. Which is to say that when it comes to marijuana – and saving his own political ass – Fantino is prepared to say anything.

The real mind bender: Fantino also said in the Sun interview that he was offered “a lot” of money by an unnamed company to get in on the ground floor of the burgeoning bud business. All he would have to do was lend his name to the enterprise. He said, “I would never do it.”

Fantino told the Globe that he’s “evolved” on the issue. He says it was his time as Veterans Affairs minister under Harper, during which he saw Afghan war vets turning to prescription marijuana to deal with anxiety, sleep disorders and PTSD, that was a turning point.

But that explanation doesn’t quite pass the sniff test either since it was under Fantino’s watch that the Veterans Affairs department recommended capping the amount of prescription marijuana vets could receive under the feds’ benefits program.

It would be interesting to hear from Fantino if his newfound tolerance for marijuana extends to reparations for those, mostly Black youth, who have been saddled with life-limiting criminal records because of pot prohibition.

As OPP commish, Fantino only saw red when it came to green, establishing a “marijuana eradication program” to bust grow-ops. He claimed the operation was to counteract a growing marijuana epidemic that he claimed was fuelling the purchase of guns, cocaine and heroin. To him, marijuana was the root of all evil when it comes to the drug trade, even though it’s widely accepted that most of the marijuana grown in Canada supplies the domestic market. It’s safe to say Fantino has never been one to let the truth stand in the way of a good story, or photo op.

He wasn’t always a buzzkill on pot. When the Liberals under Paul Martin were toying with the idea of decriminalization in 2003, Fantino instructed his officers on the Toronto force not to bust anyone holding under 30 grams. But that was more out of frustration than a belief in the idea of leniency. As long as Ottawa was taking its sweet time making up its mind on whether or not to decriminalize weed, the cops were in legal limbo.

Fantino will no doubt mine what contacts he’s made in law enforcement and political circles for his new venture. His partner at Aleafia Inc., Raf Souccar, is a former undercover drug officer and RCMP deputy commissioner, and served on the PM’s task force on marijuana.

It also just so happens that the director of communications at Canopy, the largest licensed marijuana producer in the country, is also a former underling of Fantino’s at Veterans Affairs (and also winner of the Minister’s Award of Excellence during his time there). Put that in your pipe and smoke it.