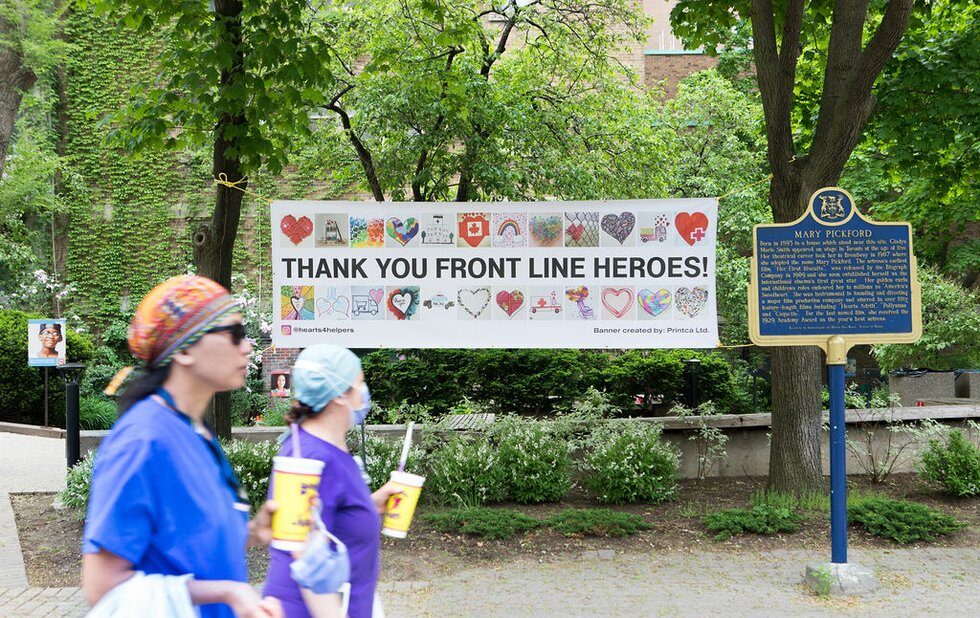 5:30 pm Lake Shore East road closure to be extended this weekend for ActiveTO

The city will once again close roads to vehicle traffic as part of the ActiveTO program.

After the Gardiner closed for maintenance last weekend, the closure on Lake Shore West will return and the Lake Shore East closure will be extended east to Leslie Street.

Here’s the list of this weekend’s closures, which will take effect on June 6 at 6 am and last until June 7 at 11 pm:

The ActiveTO program encourages people to get outside while keeping a distance from one another in order to curb COVID-19 spread. The road closures provide greater space for walking, running and biking.

5 pm Around 150 people are diagnosed with COVID-19 in Toronto each day: de Villa

She outlined the contact tracing process when a new case is reported, noting that some contact follow up investigations are completed quickly – sometimes within a few hours – while others are complex and involve contacting several people across jurisdictions.

The press has reported delays in the process. De Villa noted that from May 27-29, Toronto Public Health was able to contact almost 90 per cent of new COVID-19 cases with in 24 hours. “This rate changes daily depending on the number of cases we receive,” she said.

Since yesterday, the city has reported 139 new COVID-19 infections, bringing the city’s total to 11,652. The number of people who have recovered is 8,948 people recovered, an increase of 165 since yesterday.

There are 378 people hospitalized, with 83 in intensive care. Another 10 people have died. In total, the virus has killed 845 people in Toronto.

There are 177 non-motorized food carts, 325 motorized refreshment vehicles and 75 hot dog carts licensed by the city.

Customers are also being asked to keep two-metres distance from others while in line and to take their food home or to a park to eat.

Tory added that the summer weather and the lack of clarity around regulations for food trucks operating during the pandemic led the city to prioritize their reopening. Medical Officer of Health Eileen de Villa also said the ability for people to physical distance at these vendors, as well as the fact that they are outside, reduce the risk of COVID-19 spread when ordering street food.

Premier Doug Ford had tough talk for commercial landlords who are not working with tenants to apply for the Canadian Emergency Commercial Rent Assistance (CECRA) program.

The program sees landlords, tenants and the provincial and federal governments splitting the cost of rent, with the Ottawa and the provinces paying 50 per cent. However, many small businesses still fear they will be evicted.

“They’re just refusing to do it,” Ford said during his Queen’s Park news conference on Wednesday. “What they’re doing is they’re testing me. That’s going to be the wrong thing to do. We’re going to give it a few more days and we’ll act.

” All the landlords out there – you wanna play hardball? We’ll play hardball then because I’m going to protect the little guy,” he added.

“We’re in conversations right now with some of the largest pharmacies. Stay tuned over the next little while,” he said. “I think it’s a good model.”

Ford was referring to a deal between CVS Health and New York State that doubled the state’s capacity for diagnostic testing to 40,000 tests per day.

Ford added that he hopes he’ll have news for the public about when Ontario can move to stage two of the reopening plan “over the next week.”

2:29 pm Ontario to spend $150M for broadband in rural communities

The funding is part of the $315 million plan Up to Speed: Ontario’s Broadband and Cellular Action Plan, which was announced last July.

Telecom companies, municipal governments, First Nation communities and non-profits are being invited to submit funding proposals, the government said in a news release. The province will fund a portion of each approved project.

Today’s new case count is down following three days of successive increases that saw an uptick to 446 cases yesterday.

Another 19 people have died. The provincial death toll is now 2,312.

Ontario surpassed Premier Doug Ford’s testing goal of 16,000, with 17,537 tests completed since yesterday and another 11,636 cases under investigation.

Toronto is accelerating a plan to build modular housing on two city-owned sites.

The properties will be managed by “qualified, non-profit housing providers,” the city said in a news release, and the homes will be pre-fabricated and installed on site. Each self-contained bachelor unit with have a kitchen and washroom. There will also be a shared communal kitchen and administrative and program space.

On April 30, council approved an expedited plan to build a  250-unit modular housing project on city-owned land for people experiencing homelessness during the COVID-19 crisis.

The first phase of the project is expected to be ready for occupancy by September 2020 and another 140 units will be complete by April 2021. The plan passed 23-1, with only councillor Stephen Holyday opposed.

The province has extended the state of emergency until the end of the month.

On Tuesday, the Ontario legislature voted to approve the move, which allows the government to create and enforce emergency orders, such as the closure of non-essential businesses and prohibiting gatherings of five people or more.

Ontario has been under a state of emergency due to the coronavirus pandemic since March 17.