As Trans Mountain deadline looms, Justin Trudeau must decide where the Libs fit on the continuum of pipeline debates in Canadian history: will he revive the arrogance of the St. Laurent Grits, or repurpose the consultative approach of his father? 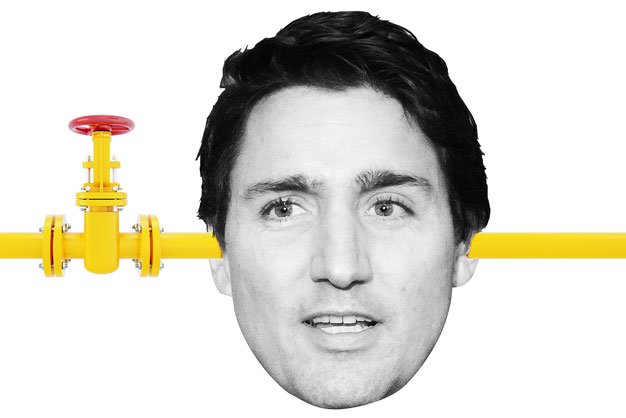 What is it about Liberal Party federalism and pipeline proposals that always triggers a crisis?

That Texas-headquartered transnational Kinder Morgan can impose a “capital strike” against the democratically elected governments of Canada and British Columbia if we do not okay its Trans Mountain pipeline expansion by May 31, is a repugnant act of aggression.

But these private, offshore interferences in our domestic politics are nothing new where Liberal governments are concerned.

Go back 62 years to the great Pipeline Debate of 1956. Then, a private, U.S. company – namely, TransCanada PipeLines, LP – needed government approval for its plan to build a pipeline to carry Alberta’s natural gas to Ontario and Quebec.

Back then, opposition wasn’t based on environmental concerns or respect for First Nations’ jurisdictional claims, but on the question of whether or not the pipeline would be Yankee-owned and controlled, despite federal backing of the project with publicly funded loans.

To ensure that the U.S. firm’s deadline was met, Louis St. Laurent’s Liberal government enacted closure to curtail the debate in the House.

The Liberal gambit was denounced as “undemocratic,” and Dief the Chief’s Tories were able to use this “heavy-handedness” to characterize the St. Laurent Grits as “arrogant” (having then been in power for 21 years). Voter backlash was swift, with the Grits ousted in 1957, allowing the PCs to form the government.

The pipeline fiasco, and controversy over American interference in Canadian defence policy that followed shortly after in 1962, served to fuel the anti-Vietnam War and pro-Canadian nationalist movement of the 1960s-70s.

It seems that the current federal Liberals are again bending over backwards to adhere to the deadline of another foreign multinational, despite the appeals from many First Nations, environmentalists and the BC government to require court hearings, stricter reviews and greater Indigenous control over territory and participation in future pipeline projects.

The latter concerns lay at the centre of another major pipeline battle that occurred 20 years after the one that brought down St. Laurent. This time Justin Trudeau’s father, Pierre Elliott Trudeau, was prime minister, and construction of a pipeline to transport natural gas from the Beaufort Sea through the Northwest Territories to connect with the existing pipeline infrastructure in Alberta was at issue.

The P.E.T. government commissioned Justice Thomas Berger in 1974 to report on the environmental, economic and social impact of the proposed Mackenzie Valley Pipeline.

The two-volume Berger Inquiry report released in 1977 was a historic document for its unprecedented consultation with Indigenous peoples, weighing the potential intrusion on their cultures alongside the “national interest” of mega-project free enterprise.

The Berger report resulted in several key recommendations on pipeline construction in the Yukon, including a recognition of ecosystem fragility that the economic benefits would be short-term and marginal, and irreparably harm traditional income from hunting, fishing and trapping and that Indigenous cultures and land claims had to be engaged respectfully.

Berger also recommended that pipeline construction be shelved for a decade. The project remained moribund until 2010 when a new industrial consortium, including the Aboriginal Pipeline Group (with its one-third ownership stake) resuscitated it.

So, today’s Trudeau Liberals need to decide where they fit on this continuum of pipeline debates: will they revive the “arrogance” of the St. Laurent Grits, or repurpose the meditative, consultative approach of P.E.T.?

Certainly, it is more in the national interest to assert the public interest over private ones to allow due process of law (including a constitutional determination of federal/provincial and Indigenous peoples’ jurisdictions) and the most stringent review of environmental (and economic and cultural) impacts possible.

If this means quick-to-pollute, slow-to-clean-up capitalists have to revisit their timetables, so be it.

George Elliott Clarke teaches African-Canadian literature at the University of Toronto. In 2016-17, he published Canticles I (MMXVI) & (MMXVII), a two-volume, epic poem attacking slavery and imperialism.