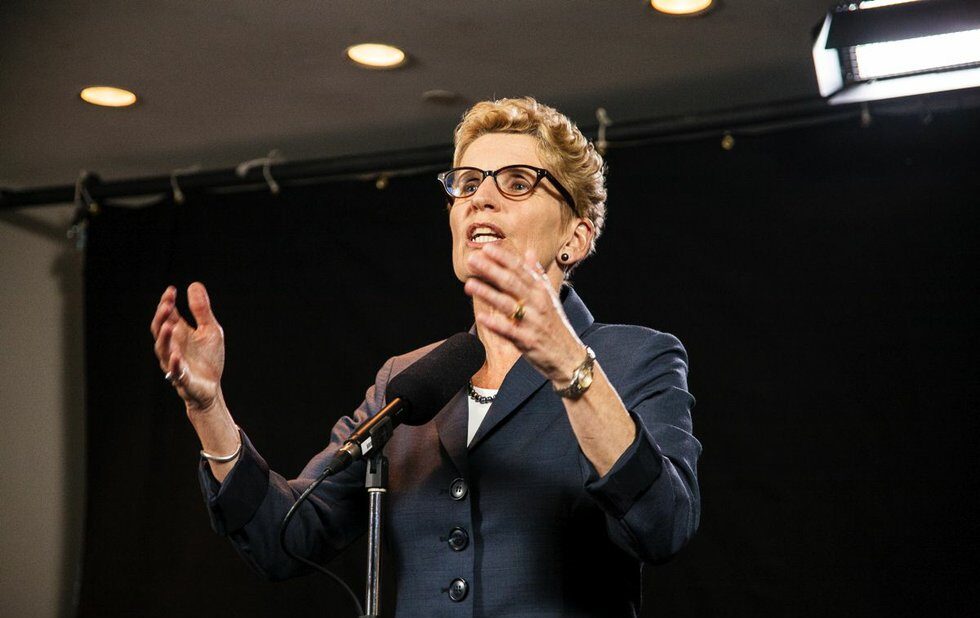 ( June 3, 2014. Toronto, ON ) Ontario Premier Kathleen Wynne speaks to the media after the televised Ontario Leadership Election Debate held at the CBC studios in Toronto.

Back when labour unions were fighting for a $10 minimum wage, there were townhall meetings held in low-income neighbourhoods across Toronto. On one of the panels, I sat beside a South Asian woman who had left an abusive relationship and was raising two children alone. I will always remember her words.

“I work at Wendy’s, and started at minimum wage (then $8) but now I have a position of responsibility and earn $9.26 an hour. But I can’t raise my two kids on that money, so on Saturdays and Sundays I work at Value Village.”

I was floored. I could not fathom how anyone could work seven days a week and still raise two children. But that is the harsh reality for tens of thousands of our neighbours, and it needs to change.

The majority of low wage workers in Ontario toil for corporate giants like Walmart, McDonalds and 3G Capital, the multi-billion-dollar Brazilian investment firm that owns Tims as well as Heinz and brewing conglomerate Anheuser Busch. It paid $12.5 billion to buy the Tim Hortons chain and Burger King in 2014, and immediately instituted a new management regime. Globe & Mail journalist Marina Strauss exposed the “brutal transformation” as half of head office and regional staff were let go. Profits skyrocketed while the pressure to find efficiencies became incessant.

When the Ontario government raised minimum wage to $14 an hour January 1, some Tim Hortons franchisees tried to take back the increase through creative measures – charging for uniforms, reducing benefits, and taking tips and coffee breaks away. The decision created a firestorm of indignation across Ontario.

Why should a multi-billion dollar company rely – and prosper – on a business model built on poverty wages? But media outlets looking to broadcast workers’ stories have encountered a wall of fear that surrounds anyone who makes a living in the fast-food world. Increasingly, workers are trapped in a franchise system that squeezes everyone involved.

So far, Tim Hortons is refusing to issue a directive to franchise owners to roll back the cuts. They hope the wave of anger will subside and everyone will go back to the familiar ritual of Timbits and a double double.

The authors of Ontario’s 2017 Changing Workplace Review, John Murray and Michael Mitchell, highlighted the need to tackle precarious work through a series of insightful recommendations. Many were adopted by the Wynne government’s Fair Workplaces, Better Jobs Act which brought in minimum wage, including equal pay for temporary workers.

But one crucial recommendation – creating a bargaining structure so that franchise workers could join a union and negotiate improvements in their lives – was left out of the Liberals’ signature effort to tackle income inequality.

The idea is a variation on the rules applied in the construction industry, where thousands of contractors and sub-contractors compete for work. Groups of contractors bargain standard agreements, that are extended to all union members in the sector. Thanks to that framework, physically dangerous work that used to pay poverty wages to vulnerable newcomers has become a career path to decent jobs.

There is good reason or the Liberals to revisit the issue, as well as sticking to the plan to raise the minimum wage to $15 next year. With an election looming, there is reason to frame the June ballot question around the words of the middle-aged woman who served me my Tim’s coffee during one recent action. She said simply, “I have worked here for years and never felt respected. But today, I feel that people are finally giving us the respect we deserve.”

It wasn’t that long ago that conservative economists believed someone working full-time deserved better than poverty wages. Just maybe the pendulum is starting to swing back towards respecting workers and communities.