"These days it feels less and less like tenants have a choice in terms of how long they will be able to stay in a neighbourhood." 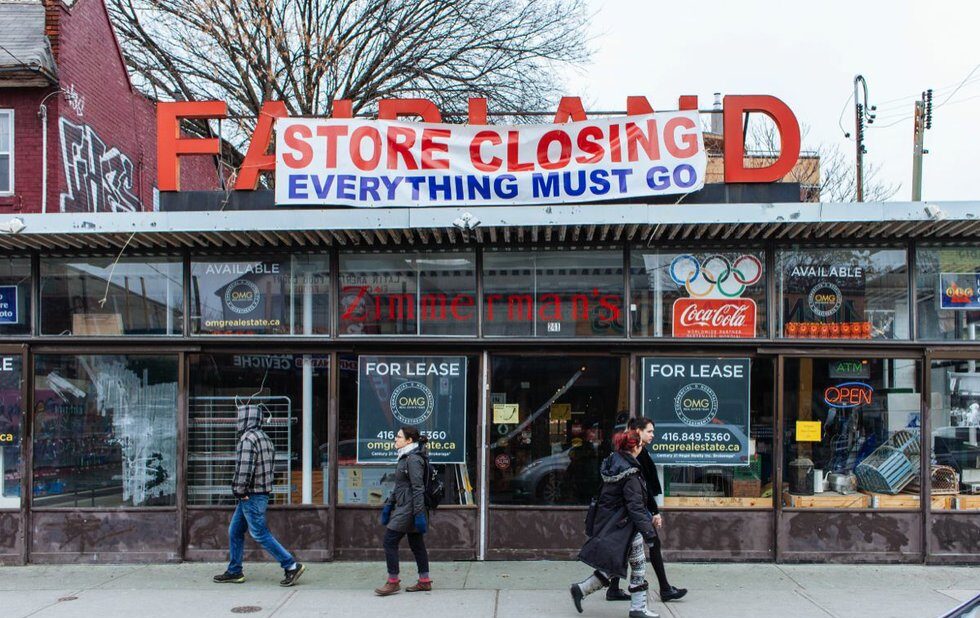 Cece Scriver has lived in Kensington Market her entire life. She’s the manager of Courage My Love the staple for vintage apparel, oddities, home goods, beads and jewellery. Scriver’s parents opened the eclectic shop 45 years ago. Four generations of Scriver’s family have lived in two Victorian houses just steps from their store.

Alix Aylen moved to Kensington Market four years ago because the rents were more affordable. As an artist, she really appreciates the open and welcoming creative community that flourishes in this sacred bazaar.

But both worry about the future of the Market. Ghost hotels are forcing tenants out while franchises take over spaces once home to family-owned and -run businesses. Residents of the Market are increasingly discouraged by the powerlessness of the city to ensure the viability of what was declared a National Historic Site in 2006.

While designation of the area by the city as a Heritage Conservation District is currently under review with a decision expected sometime this spring, it’s unclear to what extent that status will save the neighbourhood from corporatization.

Philip Pick is a name that’s been heard throughout the market for over a decade. In 2008, the Toronto real estate agent began promoting the Market as the new Yorkville and was linked to a failed attempt to bring a Starbucks to the neighbourhood. In 2013, “Wanted” posters began appearing in the Market with his name on them. Today, there’s a resurgence of commercial “for lease” signs in the Market with Pick’s name on them.

In many cases, small independent businesses in the Market are seeing their rents triple. For example, the international restaurant chain Best Istanbul, which recently moved into the Market, pays $12,000 a month in rent.

In a phone conversation, Pick says “It’s a matter of supply and demand that determines the market. More people are looking than the space that’s available.”

Pick says changes in the Market are “a function of the nature of things downtown. Kensington Market is still cheaper to rent than College or Queen and offers an important real estate market.”

Scriver, co-chair of the Kensington Market Business Improvement Association, has a different take on the situation. She says that landlords “who don’t give a damn about the Market and just want to make money… are exploiting the Market on the backs of the people who have worked so hard to make the Market their home. But business owners can’t make the profits to pay the rents.”

Scriver has a valid point. Both Good Egg and Hibiscus, longtime tenants with 10 years in the Market, recently fell prey to rising commercial rents.

Aylen sees a lack of business diversity resulting from commercial rent increases. Increasingly, a larger number of high-end bars and restaurants are changing the composition and services available, which in turn is changing who can live and eat in the Market.

Recently, a new restaurant opened up next to Aylen’s home. “It changed the atmosphere because it’s not a neighbourhood restaurant. There has been a dramatic increase in Ubers dropping patrons off. We’re seeing more vehicle traffic.”

The local BIA is affiliated with the City or Toronto, but the city’s hands are tied because it’s mandated only to collect commercial taxes and to improve the business area in general. So, residents, small business owners, artists, musicians and supporters of the Market decided to take matters into their own hands.

Both Scriver and Aylen are members of Friends of Kensington Market (FOKM), a group of citizens who want to preserve its unique character and place in the city, as well as the  Kensington Market Community Land Trust.

The land trust is to enable the community to come together to purchase property for community use. This strategy will also help the Market protect affordable housing as well as public spaces. The group is in the process of finding a way to build housing in the parking lot on Bellevue. Both groups are made up of business owners, landlords, tenants and residents who believe a land trust could be an effective way to preserve all of the things this tight-knit community values.

Aylen says the Market is, “A strong and unique community. I will stay until the last neighbour leaves and there’s no more community and no more Keninsingtonness. I will continue to live in Kensington as long as I can [but] these days it feels less and less like tenants have a choice in terms of how long they will be able to stay in a neighbourhood.”

As a business owner and landlord, Scriver says it’s important for those in the Market to “give back and honour the Market because at the end of the day, the Market is the experience.”