A GoFundMe page has raised more than $12,000 for the popular family-run grocery store and snack shop 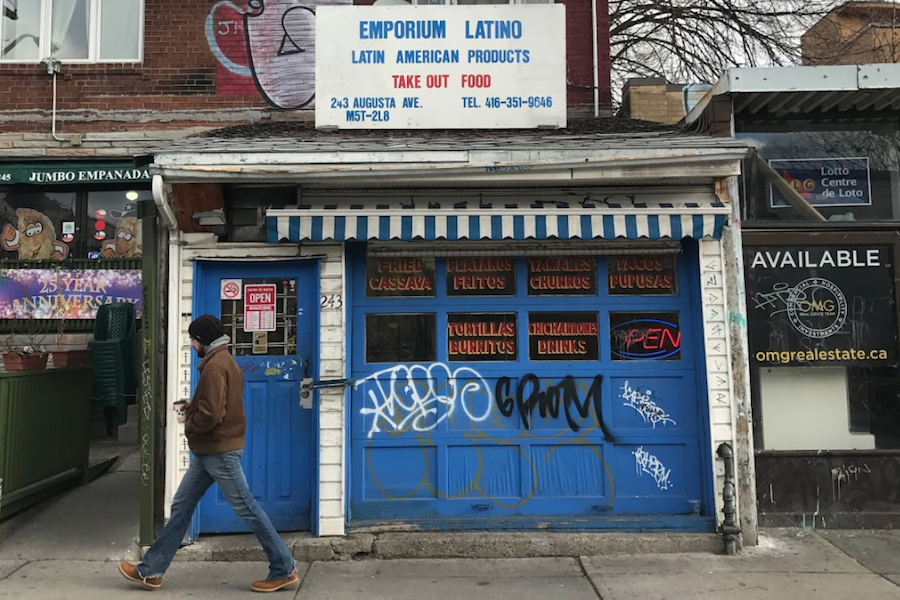 The community in Kensington Market is rallying around a popular Latin American grocery store that burned down over the weekend.

Just before midnight on Saturday, October 18, Toronto Fire Services responded to a three-alarm blaze in the two-storey building that houses Emporium Latino and an apartment above at 243 Augusta.

No injuries were reported and the cause of the fire is under investigation.

Toronto Fire on scene of a 3-Alarm fire at 243 Augusta Ave in Kensington Market. Crews had heavy smoke and flame from a 2-storey restaurant with apartments above; now under control. No reported injuries. pic.twitter.com/JDmWZl1VYM

Opened three decades ago by Cecilia and Mauricio de Espinoza, Emporium Latino specializes in groceries from Central and South America and is known in the city as a go-to spot for pupusas, a street food speciality in El Salvador.

Pedestrian Sundays organizer Patrick Morrison posted on Instagram that de Espinoza and her family are doing well, though their cat was killed in the blaze.

The family lives in the apartment of above the shop, he wrote. “They fortunately have a place to stay with family, but it will take quite a while before we see them back in business though, the building is going to need to be rebuilt.”

“Ceci and José are two lovely Salvadoran immigrants that moved to Canada during El Salvador’s Civil War in the 80s,” the page says. “They are important members of the community that make everyone feel welcome into their store.”

The page adds that 100 per cent of the funds raised will go toward the de Espinoza family to use and distribute among employees.

“I am Salvadoran myself and their store was like a little piece of home in the Market for me,” says Leyla Razeghi-Hutchison, who launched the GoFundMe page. “This has been a very difficult year for everyone and the neighbours were saddened and shocked when we heard the news of a fire in their store and home. We were worried about the owners and their employees.

“The community was eager to support them so the campaign has been doing really well,” she adds. “They are amazing people and I hope that they can rebuild and go back to doing what they love very soon.”

Please support Latin Emporium thru this fire recovery GoFundMe. They are lovely, decent, hardworking people who ran a Kensington Market mom & pop shop and lived upstairs. They lost everything. https://t.co/WrUir0V45X