The neighbourhood is asking Doug Ford's government for urgent protections so that the pandemic doesn't do what gentrification has been threatening: kill the character of Kensington 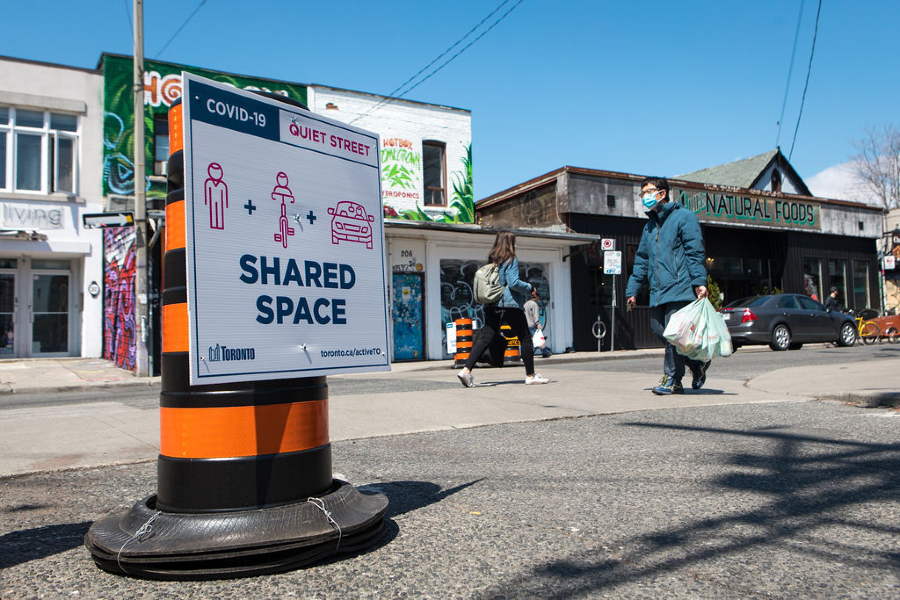 Kensington Market is in trouble.

More than a dozen small businesses have closed since the COVID-19 pandemic started. Stretching back to the summer of 2019, the number is closer to 20.

And with Toronto in a new lockdown that sees independent shops forced to close other than curbside pickup and delivery, the number is threatening to grow. A number of businesses are just barely hanging on, the local Business Improvement Association says.

On November 20, a number of displaced business owners and the area’s MPP held a press conference on Zoom to sound the alarm bells and to ask the Ontario government for more protection.

Since then, two more longstanding bars/music venues closed, Cold Tea and The Boat. The latter is right next door to martial arts studio Krudar Muay Thai and its upstairs music venue neighbour, ROUND venue, which were both abruptly kicked out by their landlords in early November despite a ban on commercial evictions.

“Kensington Market has already had to deal with astronomically rising commercial rents, an opioid crisis, the encroachment of big box stores. I don’t want this to be the final nail in the coffin, but for some businesses it will be,” says University-Rosedale NDP MPP Jessica Bell. “And it shouldn’t be.”

What kind of protections would help?

Bell is joining the Kensington Market Business Improvement Area (BIA) and local business owners calling on Premier Doug Ford and the ministry of finance to create more protections in Kensington and Toronto in general.

They’re asking for a retroactive and more consistently enforced moratorium on commercial evictions and a more inclusive and retroactive rent relief program.

In addition, the NDP continues to advocate for its Save Main Street plan, which includes a 75 per cent commercial rent subsidy, mandated sick days for all workers in Ontario and a fund to help businesses with safe-reopening costs or remote-work set-up costs.

“We’ve been asking for these protections for months now and I don’t think the government is hearing us. Are they hearing us?” asks Gwen Bang, chair of the Kensington Market BIA.

“Not just us, but all of TABIA (the Toronto Association of Business Improvement Areas) have been asking for these protections that would help keep our small businesses alive. And [the Ontario government] just hasn’t done it.”

Here is a list of all the Kensington Market businesses that have closed in the last year due to the pandemic, evictions or other factors like rising rents and gentrification:

Protecting the fabric of Kensington Market

Kensington Market isn’t the only Toronto neighbourhood feeling the pandemic squeeze. The Roncesvalles BIA estimates around eight businesses have closed since the pandemic started, for instance. But Kensington stands out for different reasons.

More than most other neighbourhoods, Kensington Market’s businesses rely heavily on tourism and foot traffic, both of which have drastically been reduced as people have been mandated to stay home.

The popular monthly Pedestrian Sunday event, which was cancelled this year, typically packs the streets with people during the summer and fall, creating a street scene with food and crafts from local vendors, restaurants, buskers and performers.

Historically, Kensington has been a place for many new immigrant groups to settle and sell food, produce and other wares at mom and pop shops. It remains vibrantly multicultural and full of independent shops, bars and venues, but it’s had to fight to keep its character over the past couple of decades.

Issues like rising commercial rents, expensive redevelopment projects and the encroachment of corporate businesses have increasingly affected neighbourhoods throughout the city, but in Kensington those are existential threats.

ROUND Venue and The Boat were both second-floor venues, which are hard to license without businesses being grandfathered in. The neighbourhood has architecture features, like awnings that overhang onto the sidewalk (technically city property), that wouldn’t be allowed in other areas of the city.

Kensington is seeking approval for a Heritage Conservation plan that would protect many of those unique architectural features, but there’s a danger that losing businesses might not allow similar shops and bars to take their place.

There are also issues related to new businesses that have opened since the pandemic started and have not been able to access the same government assistance and relief programs as their neighbours.

Armenian music bar The Oud & the Fuzz, like all other bars and restaurants, has been closed since this most recent lockdown started. According to owner Shaunt Tchakmak (who also co-owns Queen West cafe and record shop Antikka), he’s ineligible to apply for help – even though he signed the lease slightly before the first pandemic shut down in March.

A post shared by The Oud & the Fuzz (@theoudandthefuzz)

“I signed my lease to open my business in January of 2020 expecting to open in March,” he writes in a change.org petition. “I was mandated to shut down then and opened my business in June of 2020 when patios were allowed to open. Since, I have worked tirelessly to contribute to the community and the economy. Now, we are mandated to shut down once again and are left with ZERO assistance.”

Tchakmak says he’s been in touch with the Canadian Revenue Agency, his local MP and the office of Minister of Finance Chrystia Freeland. He says he received word from them that there’s an effort to reassess the application guidelines.

“I need to make as much noise about this as possible and ensure that the government feels some sort of pressure to follow through with expanding these guidelines to new businesses,” he writes.

Spots like The Oud & the Fuzz along with ROUND, The Boat and Cold Tea also represent the Market’s music and nightlife cultural identity. Now-closed restaurants like Moo Frites, Krepesz, San Cosme and Ding Dong Exotic Sweets have removed various cultural cuisines (Belgian, Mexican, Hungarian, etc), while the loss of clothing stores like Model Citizen and Pink Canary have taken away retail opportunities from many local designers.

Then there’s Emporium Latino and Jumpo Empanada, which are currently closed due to fires unrelated to the pandemic. All within the last nine months.

Kensington has been a fiercely protected neighbourhood, but without protections and financial support, the pandemic could speed up what’s been happening for years due to the forces of gentrification and rising rents: kill the culture of Kensington Market.

Getting evicted during a pandemic

ROUND was one of the few bars in the city, especially those outside the Church-Wellesley Village, to regularly put on LGBTQ+ programming like drag shows and parties like Cherry Bomb, Big Primpin and Business Woman’s Special.

Krudar Muay Thai was a 15-year-old family-owned Thai business that acted as a health (physical and mental) support and community hub for people of all ages.

ROUND and Krudar were both evicted from their Augusta locations at the end of October, by a landlord who they say locked them out.

“We have poured our life savings into our business just to stay afloat, under a promise from the premier and minister of finance that they would be there for small businesses,” said Darwin Miranda who co-owns Krudar with his wife Danica Miranda. “Commercial tenants are being evicted while they wait for relief.”

ROUND owner Ashley Giesecke says her venue has been closed since the original mid-March shutdown and couldn’t convince her landlord to participate in the commercial rent relief program, which initially had to be applied to by landlords rather than business owners. That’s since been replaced with the federal Canada Emergency Rent Subsidy (CERS) which allows tenants to apply for directly relief.

However, the eligibility requirements remain unclear, and any businesses that opened since March 15, whether or not they had already been planning to open before the pandemic, have been left out. Relationships between many landlords and tenants have been irreparably damaged.

Ontario’s latest eviction moratorium ended on October 31. It’s since been renewed, but Krudar and ROUND were evicted during the gap.

“Without notice, my landlord changed the locks,’ says ROUND’s Giesecke. “I can’t even get in to get my personal belongings.”

After many cries from local businesses and supporters, Ford has renewed the commercial eviction moratorium a number of times now, but the Kensington BIA wants the renewals to cover longer periods of time and retroactively cover the periods when the ban was lifted.

“We want extended moratoriums instead of dangling by a thread, crossing our fingers month to month that our landlords won’t evict us,” says Bang, who also owns Kensington Market bar Lola.

What will Kensington Market be like after the pandemic?

Even before the pandemic, Kensington Market had been struggling due to unregulated commercial rents. Properties are valued with an open-market mentality based on what could hypothetically go in a piece of property rather than what’s already there. One of the ways Ontario Municipal Property Assessment Corporation assesses value is a “direct comparison approach” that uses the sale price of nearby properties.

So a two-storey building could theoretically be taxed like a multi-storey complex next door and a landlord could double or triple the business owner’s rent, which is what happened to vegan restaurant Cosmic Treats last year.

Many independent mom-and-pop shops can’t afford rents based on assumed market value in a hot-spot neighbourhood like Kensington, which opens the door for big commercial entities to swoop in.

A number of cash-infused cannabis dispensaries – including One Plant, the Kensary, Dispensary on Nassau and Hotbox (the long-running cannabis cafe that was recently sold to Friendly Stranger and converted into a retail cannabis shop) – have all recently opened in close proximity on the main thoroughfares Kensington, Nassau and Augusta. Two more – Hot Buds and The Bend Cannabis Co – also have pending applications on the same streets.

The Kensington Market BIA worries the area will be saturated with one type of retail as empty storefronts get bought up, changing the character of the neighbourhood. The BIA is pressing the Alcohol and Gaming Commission of Ontario to put in new protections says Operations Manager Cassandra Alves.

“Without these important protections, we’re still going to see businesses close,” says the BIA’s Bang. “Even once the pandemic is over, small businesses will struggle to get back on their feet.”

“Small businesses are the heartbeat of our city. It’s what makes Toronto interesting,” she continues. “If we lose that, what kind of city are we going to be?”