NOW MagazineNewsLee’s Palace gets made over

Lee’s Palace gets made over

Famous Lee's Palace mural from the 80s is no more 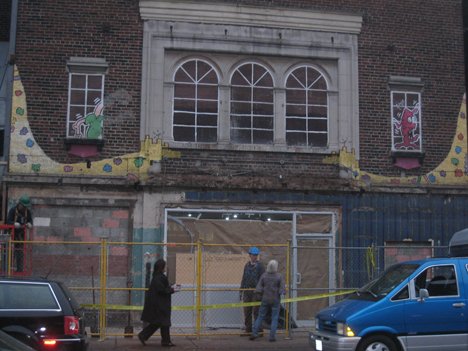 Unbeknownst to a lot of people in the city, Lee’s Palace took down their famous facade this afternoon as part of renovations.

Residents were stopping in their tracks on Bloor, and going abuzz on Twitter, worried that Lee’s Palace was a goner.

But no fear, Lee’s Palace had planned it since this past June, and it isn’t going anywhere — it’s just getting some new touch-ups, which includes putting up a new mural (by Runt, the original artist), a new sign, and the addition of a Big Fat Burritos take-out spot. All part of the City of Toronto Commercial Façade Improvement Program. (The city matches the reno funds 50-50.)

“It’s still the same everything, same owners,” said Big Fat Burrito owner, Mike Shepherd. “A new sign had to go up because the old one was rotting and everything. It was collecting pigeon compost, and bird droppings were landing on people.”

Those curious as to what the new, pigeon compost-free mural will look like will have to wait until spring. [rssbreak]