The Legalization Issue: From medpot to the next frontier psychedelics as medicine

Alison Myrden eats a lot of magic mushroom: most days, shell have around 50 grams. For even the experienced drug. 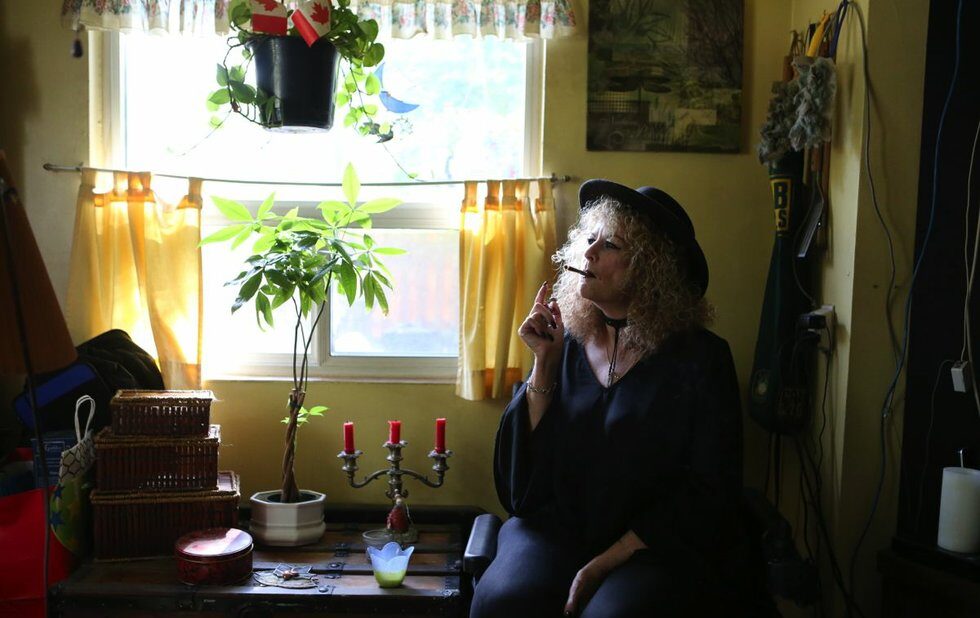 Alison Myrden says magic mushrooms are the best form of medication for her pain from MS and a nerve disorder.

Alison Myrden eats a lot of magic mushroom: most days, shell have around 50 grams. For even the experienced drug user this would be a stratospheric, interplanetary volume of psilocybin to ingest.

But for Myrden mushrooms are more medicinal than mystical. She experiences no psychedelic effects from them. They are the best form of medication she has to get relief from the pain associated with multiple sclerosis and trigeminal neuralgia, a nerve disorder that causes a searing, electric pain in a persons face. Its been called the suicide disease because the pain is so excruciating and acute that it has been known to drive people to kill themselves.

Myrden is preparing to go to court to fight for a legal exemption to consume medicinal mushrooms. She and her legal team made up of prominent cannabis lawyers Paul Lewin and Jack Lloyd are currently preparing an application and court challenge to get an official exemption from the Controlled Drugs and Substances Act (CDSA).

As the country prepares to blow the doors open on legalized cannabis, Myrden and her lawyers are looking to what they see as the next frontier: psilocybin. And theyre willing to take it all the way to the Supreme Court.

An ex-corrections officer, Myrden, 53, has a long history of self-medicating, and a pretty good track record of convincing the Supreme Court of Canada to let her do it. In the mid-1990s, she was one of the first cannabis users to push the government, through legal challenges that also rose to the Supreme Court, to legalize medical cannabis.

That would prove to be a tectonic shift for cannabis in Canada.

Myrdens discovery of the medicinal properties of psilocybin was almost entirely by accident.

I was having a really bad day, and I was at a friends place, Myrden says. That friend handed her a mushroom a Blue Cambodian.

It weighed in at about five grams, and I ate pretty much the whole thing, Myrden says. I was so frustrated, and I was trying to get relief. And bang, within 10 minutes, my face changed, and all of a sudden I had no pain. I was a brand-new person.

That experience became foundational in how Myrden treats her own illnesses, and she wants it to be legally available for everyone like we did [with] cannabis, she says.

Myrdens use of psilocybin lies somewhere between sanctioned health care and self-medication.

She has a prescription for 50 grams of psilocybin daily NOW has viewed a copy of the prescription, which is signed by Myrdens doctor just in case the cops show up. The prescription does not make them legal, but would potentially earn her some leniency.

Its not as if Myrden can buy mushrooms in a pharmacy. She still has to source them from the street, which can be precarious. When I catch up with her in September, she tells me she isnt feeling great since she cant get a hold of any mushrooms. One time, her mushroom source disappeared for eight months.

However beneficial mushrooms are to Myrden and however safely she uses them, the initial application is still a long shot.

Lewin figures that the government is too fresh off legalizing weed to consider the idea of medical psilocybin. My gut feeling, and this is just speculation, says Lewin, is that theyve just done a little bit too much already. In other words, the government is cracking the door open on drug use ever so slightly with legalized cannabis, but its not about to ram a mushroom-shaped truck through it.

They arent ruling out the idea completely, though.

Health Canada reviews all applications submitted for an exemption under subsection 56(1) of the CDSA on a case-by-case basis, on its own merits, the department notes in a statement, taking the public health and public safety objectives of the CDSA into account.

Lewin says that the plan isnt to be refused, but it sort of is, as a denial of Myrdens application would open the door for a federal court appeal, and losing there would give them what it seems like theyre really gearing up for: a chance to fight out the merits of medical psilocybin in front of the Supreme Court in a kind of sequel to the medical cannabis court challenge of the 1990s.

There, says Lewin, the case would not be about Myrden so much as it would be about the merits of using mushrooms for medical purposes. There, they might actually have a shot, as the concept of psilocybin as medicine is gaining acceptance among medical professionals.

In an editorial published in a 2016 edition of the Journal Of Psychopharmacology, Dr. David Nutt wrote that we have input from experienced psychiatric clinical trialists, leading pharmacologists and cancer-care specialists. They all essentially say the same thing: its time to take psychedelic treatments in psychiatry and oncology seriously, as we did in the 1950s and 1960s, which means we need to go back to the future.

Nutt argues that there was no evidence of psilocybin being harmful enough to be controlled when it was banned, and since then, it has continued to be used safely by millions of people worldwide with a very low incidence of problems.

The concept that mind-altering substances can also have medical properties is not limited to cannabis and psilocybin. Psychoactive substances like MDMA have shown promise in treating conditions like anxiety and PTSD.

It seems that even Health Canada is open to the idea that psilocybin could be the next frontier in natural medicine. A spokesperson confirms to NOW that it has authorized at least one clinical trial using psilocybin in patients with treatment-resistant depression.

Lewin says his team is still working on lining up medical experts to testify on Myrdens behalf.

At the centre of it, though, is Myrden, who has to get up every day and fight through almost unimaginable pain.

For most people, her fight is an abstraction, a debate about what is medicine and what is a drug, and the sometimes arbitrary lines we draw between those two things. For Myrden its her life and her ability to live it without pain.

Most days, she cant walk shes on her third electric wheelchair, she says.

The impact that psilocybin has on Myrden is obvious: nearly an hour after we started talking, the life in her the life thats kept her fighting for the better part of 30 years starts to show. Her warms as the psilocybin takes effect.