Lets get on track

If we are going to win the fight against climate change, we must collectively tackle three big sources of greenhouse. 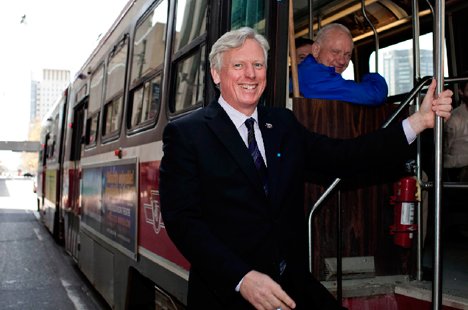 If we are going to win the fight against climate change, we must collectively tackle three big sources of greenhouse gas emissions: buildings, energy generation and transportation.[rssbreak]

But it’s in the area of transportation that Toronto has the greatest opportunity for change in 30 years. I know from experience how much public transit matters to people’s lives. And I’m not prepared to stand by and let the once-in-a-lifetime chance we have to build the rapid transit Toronto needs pass us by.

In 2006, I ran for re-election as mayor with a commitment to build a network of light rail transit across the city. Having been a regular transit rider from the age of seven (not to mention mayor and a TTC commissioner), I understood the challenges.

I knew our transit system was excellent for a city of 1.5-million. But it no longer served the needs of almost 3 million residents at the heart of a metropolitan region approaching 6 million. Something had to change. “A Transit City” became a cornerstone of my re-election platform. Torontonians overwhelmingly endorsed my view when I received almost 60 per cent of the votes cast.

I committed to light rail because it meets the needs of Toronto’s inner suburbs: Scarborough, Etobicoke and much of North York. Those communities were built in the 1950s and 60s to much lower densities than downtown, making it impossible to justify an investment in subways there.

Light rail can be built at considerably lower cost and more quickly. In order to do the right thing for the environment, we must ensure that people living in automobile-dependent areas have an economical and reliable rail-based transit option.

That’s what Transit City can achieve, and why, on June 15, 2007, Premier Dalton McGuinty announced funding for the Transit City plan the city had unveiled three months earlier. “The time to make this sort of ambitious but realistic investment is now. Our economy demands it,” the premier said. “What’s more, our families deserve it, because gridlock not only saps strength out of our economy it steals time from our families.”

I couldn’t agree more. And I’m sure that’s why the premier ran his own 2007 election on the same platform – sweeping 19 of Toronto’s 22 seats. Amongst those ridings were the very neighbourhoods Transit City would serve: Scarborough Malvern and the U of T Scarborough, the Sheppard East corridor, Etobicoke-Finch West and Humber College.

The TTC immediately began the necessary planning and engineering. And 2009 became a remarkable year as Dalton McGuinty announced funding for the first four Transit City lines, Prime Minister Stephen Harper funding for the Sheppard LRT and the city for the light rail vehicles that will replace our streetcar fleet and provide the new Transit City vehicles. By December 2009, construction had begun along Sheppard.

That’s why the province’s surprising announcement that it is slashing Transit City funding in this year’s provincial budget by almost half is so short-sighted and wrong!

We cannot let this happen. We’ve done so much in the city to combat global warming. The one place where we lag behind, however, is in the construction of new rapid transit. We will not reach the environmental goals we share unless we build a city where people from every neighbourhood have the same choice as those living in Rosedale and North Toronto: rail-based rapid transit.

The neighbourhoods where Transit City projects face cancellation are amongst our poorest. People living there would have vastly improved opportunities once they are truly part of Toronto’s social and economic fabric.

Transit City vehicles built in Thunder Bay with parts made in the GTA will help rejuvenate our modern manufacturing industry and ensure it’s environmentally friendly.

To honour Earth Day, residents across the city will be fighting to save Transit City. Add your name to the cause, phone the premier and your MPP at 416-326-1234. Or go to savetransitcity.ca. We can’t build a great city without great public transit. We’ve waited 30 years. The time to act is now.