Plus, how psychedelics changed my life, stage 3 COVID truths and a wartime monument that has no place in Canada in Letters to The Editor this week 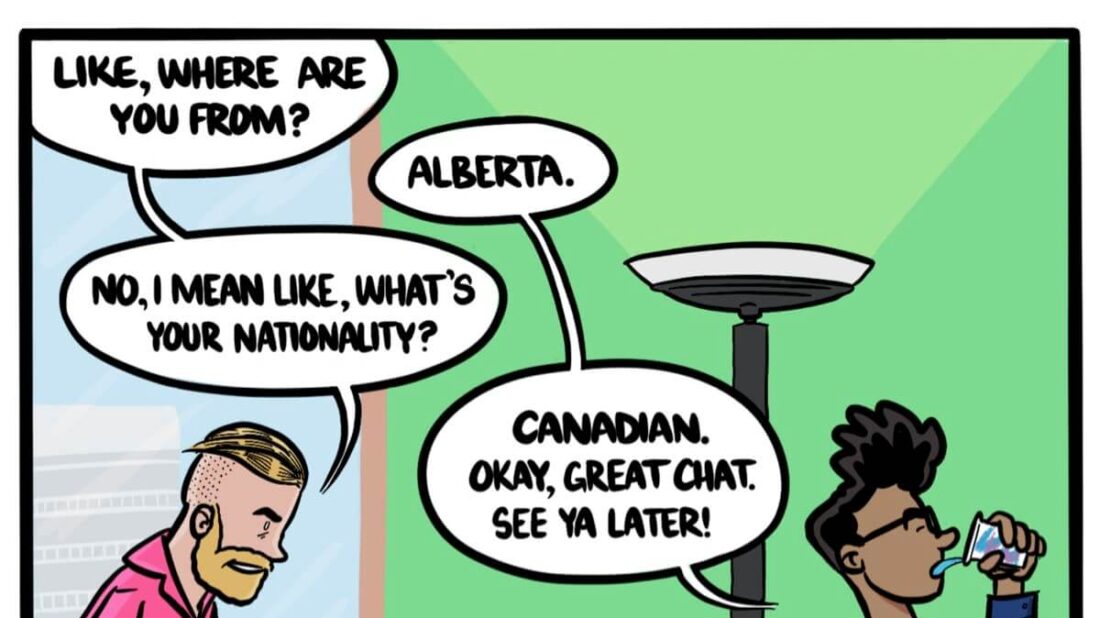 The underlying message in cartoonist Jon Olbey’s comic So… Let’s Have A Laborious Conversation (NOW July 23-29)  is problematic. It’s a misleading stereotype that only non-whites get asked where they’re from. Everyone gets asked this – Americans that moved to Canada, French-Canadians, Quebecois, Acadian, Newfoundlanders etc.

Most co-workers are just trying to learn more about us – and our ethnicity is a big part of that. There are only so many topics to talk to your co-workers about and food and travel is pretty safe.

If someone doesn’t want to share, they just say something generic and you move on. It’s standard office etiquette.

Re Microdosing 101 (NOW, July 23-29) Great to see this article. Microdosing completely changed my life, so much that I opened a micro-dose retreat in -Jamaica, where psilocybin is legal.

Getting spiritual on shrooms

Psychedelic mushrooms are not just “shrooms,” (NOW, July 23-29) but an extremely strong spiritual drug never to be taken lightly. Before indulging I would recommend reading How To Change Your Mind by Michael Pollan.

The “definitive” Alicia Silverstone version of Emma? (NOW Online, July 22) Are you kidding me? I just watched Clueless for the first time. It’s one of the most overrated films I have ever seen. In my opinion, the two best adaptations of Emma are the 1972 miniseries with Doran Godwin and the 2009 miniseries with Romola Garai. I would rate the 1996 movie with Gwyneth- Paltrow as the third.

The monument to the Galician SS Division should not be on Canadian soil (NOW Online, July 25).

The division fought against the Allies and for Hitler. They had to take an oath to obey Hitler “unconditionally, to the last drop of blood, so help me God.” Canada fought alongside the U.S., the rest of the British Empire, France and the USSR to get rid of the Nazi regime. The owners of the St. Volodymyr Cemetery should remove the monument immediately, or be tarnished by its presence.

Re Tory Asks Ontario For Stricter Restaurant Rules In Stage 3 (NOW Online, July 19) People are taking their masks off all the time in public spaces to eat, drink, speak, etc., so they are not protecting anyone.

Tricks to keeping your pandemic sanity

I’m really enjoying reading about things going on in the city, walks to take (NOW Online, July 27) and news items. Thanks to all of you for all you do to keep us sane.