Red Rocket revolt Why does the fare. 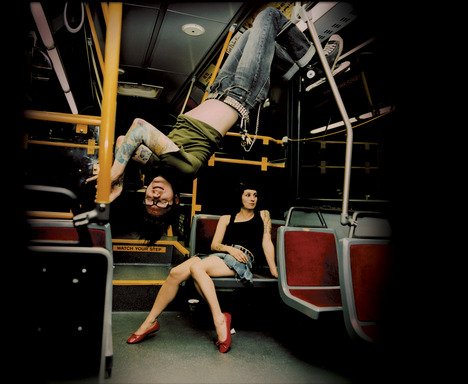 Why does the fare charged by the TTC feel like extortion of the poor working class (NOW, November 19-25)?

Many of those who take the TTC on a daily basis do so because they have no other option.

They’re forced to pay whatever fare is charged and suffer whatever delays in getting to their destination that the TTC is prone to incur.

How far will transit riders be pushed before there’s an outright revolt?

I found NOW’s gift-buying issue amusing (NOW, November 19-25).NOW is supposedly committed to the environment, yet this issue promotes all sorts of electronic gadgets that are not sustainable, not recylable and create the need for more power generation.

Something to think about for next year’s issue.

Dog of a green argument

Regarding Wayne Roberts’s Rover’s Paw Prints All Over The Planet (NOW, November 19-25).

Hunks of metal versus living beings.

I keep seeing this dog of a green argument around, yet no one notes the basic error in its logic.

We want a planet Earth that hosts living beings and plants rather than hunks of junk.

Perhaps I should kill my cats and myself so more crazy SUV drivers can remain on the road.

Call it my moral act of green.

Two years ago my brother, Trooper Darryl Caswell, was killed in Afghanistan.

Since then I have been wrestling with my feelings about the mission, particularly since I am a major in political science at U of T and am often forced to consider Afghanistan from an academic viewpoint.

I’ve read some crass editorials about bringing the troops home.

I never made the connection between poppies for Remembrance Day and the opium in Afghanistan and appreciated the way the article addressed the issues of patriotism. The piece was respectful to the memory of those who have died in service but critical of the policies that brought them there.

In that way it brought me immense comfort. I’ve always struggled with my political disagreement with the mission and my desire to think that my brother gave his life for something worthwhile. Now I see that these things don’t have to be at odds.

About war, kids are all right

My daughter’s elementary school class was working on a tableau commemorating Remembrance Day. My zombie-loving 10-year-old suggested they model it on Dawn Of The Dead, with everyone chasing and killing each other like zombies to show how silly war is.

One kid said, “I’ve got a rifle and I can kill everybody,” pointing it around the class and going, “Bam! Bam!” Then another said, “I have a rifle, too,” and started shooting, so everyone started running around and shooting and falling down.

Then my daughter marched in and, striking a pose, said, “Everyone’s dead. Now we have peace!”

Everyone laughed, but the teacher said, “Sorry, kids, this is a solemn occasion, so you’ll have to be serious.”

The kids have it right: war is silly.

Susan G. Cole asks in her review of The Horse Boy (NOW, November 12-18), is “it the horse or Rowan who’s got the gift?” As a certified equine and yoga therapist, I can confirm that both Rowan and Betsy, as well as all other horses featured in this extraordinary movie, are gifted healers.

We humans could learn a lot from Betsy and Rowan.

Take a pass on preaching

Your plug for Reena Katz’s Right To Differ event (NOW, November 19-25) would be interesting if the event were more a dialogue than a monologue. The participants all seem to come from one mindset, one I lean toward. But to speak amongst ourselves holds no interest for me, so I won’t be attending.

Many thanks for including the info and before-and-after pics of the late lamented Edgewater Hotel sign (NOW, November 19-25).

I was hoping to find something and was thrilled to see it. I hope it helps to shame and put pressure on those who have allowed this, along with many other such travesties, to happen through lax enforcement of city bylaws and/or wilful neglect.