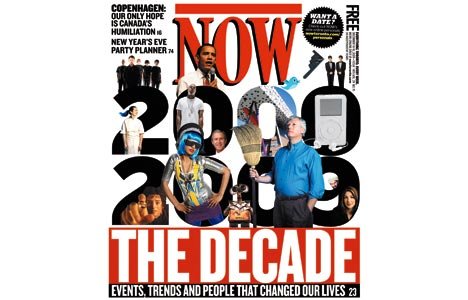 Two U.S. presidents on your decade cover (NOW, December 10-16) and no sign of Stephen Harper? As a relatively recent U.S. transplant, I wish Canadians would pay more attention to the ways – small yet persistent and insidious – in which this PM, his party and his set of ideologies are changing our lives.

Despite NOW’s constant sanctimonious blathering about social responsibility to the poor and marginalized, the Last Minute Gift Guide (NOW, December 10-16) shows NOW’s own allegiance to corporate greed: six pages of suggestions for some very expensive gifts. There was one page with five ads for “The Spirit of Giving.” Hopefully, these worthwhile agencies were spared the advertising fees. Oh, and the usual eco-yap in the same issue! Why did NOW allow a glossy insert from Molson that had no recyclable logo on it? Surely, NOW should aspire to the same high standards you expect from others and government.

Your review of Prince Paul (NOW, December 10-16) is a steaming pile of bullshit. I personally hate it when I see classic hip-hop artists and they play wack songs. That shit is totally played out. I accept nothing but underground nerd hip-hop with technical skills that blow me away when I see legendary rap producers as well. Can you feel the sarcasm?

I was at that show and was more than happy to hear one of my all-time favourite producers drop pretty much every hip-hop anthem known to man. My only guess is that your reviewer has a gigantic object shoved so far up his arse that he feels the need to be overly critical of a show to impress his fellow so-called journalists.

I know the hundreds of people who lost their minds at that show would feel the same way. Prince Paul dropping early-90s hip-hop? Ugh. So lame, right?

I had to smile reading your article about the mysterious Leon Redbone (NOW, December 10-16). Some people never change.

As a young music lover in the early 1970s, I went regularly to Fiddler’s Green, a folk club in Toronto. So did Redbone.

Many winter nights, I walked from the Green to the Eglinton subway to catch the last bus up Leslie to the burbs, escorted by Redbone, an “older man” probably in his 20s who sometimes played at the club.

We would chat and he would tease me about my name and make sure I was safely on the bus before he descended into the subway station.

Some years later, through mutual friends, it happened that I spent a few days over New Year’s at his home in the U.S.

Leon Redbone has many secrets, and there are those in Toronto who have known him and could shed more light but instead will respect his privacy. Me, I remember a sweet, eccentric young gentleman who was kind to a 15-year-old girl out by herself at night in the city, both loving music.

While it’s true that Monbiot essentially broke his no-fly vow to come over to T.O. to help spark our climate conservation efforts, if it’s contradiction on climate issues that Heeley really wants to root out, why not push the feds, the province and the city to truly account for all the various emissions from Pearson Airport?

If Heeley really cares about climate conservation, why not be vexed by Adria Vasil’s column about climate-conserving actions (NOW, December 10-16)? She forgets to mention cycling. Readers should be aware that a rather large and well-oiled quick-attack campaign seems to be in place for true leaders on climate change ahead of this important climate summit.

Regarding port cuts tidy land deal (NOW, December 3-9). When the east end of the Gardiner was demolished, two large areas were found to have high levels of contaminated soil and polluted ground water.

One was the southwest corner of Leslie and Lake Shore, which is to be home of the TTC’s new streetcar facility. Instead of soil/water remediation, city staff recommended, and council approved, a cheaper expedient method that allowed the city to merely place a cap of “clean” soil on top of this contamination.

Community alarm about this contamination resulted in council passing a motion to set up the Gardiner East Contaminated Soil Monitoring and Review Committee. As one of its original resident members, I am concerned that this land purchase may be a disaster.

The TTC will be the recipient of contaminated soil contained in an area of approximately 15,000 square metres. Much of the contamination consists of volatile organic compounds and polyaromatic hydrocarbons, with more than a smattering of heavy metals such as lead.

When construction of this TTC facility begins, there will undoubtedly be exposure to the underlying contamination. Worker safety notwithstanding, a larger question is how it will affect our community.

This letter is not an objection to the TTC’s plans, but it would be prudent to engage the residents in a very real way – sooner rather than later – in how this matter is going to be handled.

Why is everybody getting all fucked up over allegations that Canadian soldiers were transferring Taliban prisoners (the bad guys) to Afghan officials (the good guys) who might have tortured them (NOW, December 3-9)?

I thought the good guys were our buddies, allies and best friends forever. So they have a little issue with torture, but, hey, nobody’s perfect.

We all know in our little Canadian hearts that they are doing their damnedest to defend democracy in Afghanistan and protect the right of Afghan girls to train to become neurosurgeons, although it’s obvious that no one in the country has any brains.

My question is this: why are Canadians dying in such a hopeless, medieval shithole as Afghanistan?