Curing electoral dysfunction As the pioneers in drooping. 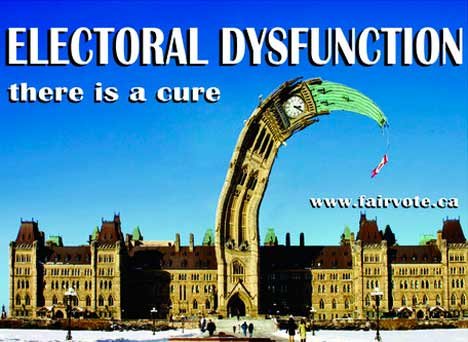 As the pioneers in drooping peace Tower imagery to symbolize Canada’s dysfunctional Parliament, we congratulate NOW for following in our footsteps (NOW, January 7-13).

The important point is that electoral dysfunction can be cured. Do you or someone you love have the symptoms? Do you vote in election after election but frequently fail? It’s not you, it’s the system – and a good dose of proportional representation will have you functioning democratically in no time at all.

Federal politics have become so alienating and exasperating during the Harper dictatorship, I have no confidence in voting for any of the three major parties. Ineffective leadership, flip-flopping on environmental policies depending on the “economic situation,” etc. All they seem to be capable of is pointing out the other parties’ faults instead of stating what their party will do when elected. I just hope that through good municipal and provincial leadership we can continue acting like a progressive, developed country and not a resource-dependent, socially conservative, climate-change-denying backwater.

Paul Terefenko’s Down On Digital (NOW, January 7-13) nods briefly to two important questions in relation to the rise of digital technology.

But most of his article seems to concentrate on the battles over elitism in art that more commonly find their expression in the fight between copyright militants and the creative commons, or the conflict between notions of art as a social good versus art as a sacred object that sanctifies its (wealthy) owners.

Shorn of its romantic and traditionalist gloss, the practice of setting a value on technology based purely of difficulty or scarcity supports a social construction that values privilege, exclusivity and established value: the old over the new.

Regarding Game Over For Final Fantasy, Game On For Owen Pallett (NOW, January 7-13). I would like to affirm that there are indeed still people out there who give a damn about sound quality. Admittedly, there are lesser numbers of fanatics who will spend time and care building two-channel analog systems.

They do exist, though. This I know, as I am one of them. I love many aspects of music, specifically in terms of its scope and beautiful writing. Without raving too much about my gear, I have a Rega Planar 3 turntable and some handmade British speakers that at times bring tears to my eyes.

War, what is it good for?

Letter-writer Rudolf Manook has got his physics all wrong (NOW, January 7-13). Who knew that war has a good side when it comes to global warming?

A number of scientists are suggesting that we should be putting particulate matter (dust) into the atmosphere to cut down the sun’s warming effect. Why? Because it would effectively darken our skies. See the death of dinosaurs, the effects of volcanoes, meteors hitting Russia, nuclear winter, etc, in your history books.

Admittedly, war is a rather wasteful, cruel way of cooling the earth. Nonetheless, it could work.

Aren’t we in a recession here? So many of us are struggling, and NOW is pushing the idea of spending (tell me it was a typo) $445 (plus tax) on a basic grey zip-up hoodie (NOW, January 7-13)?! How can anyone in good conscience spend that kind of money on something they could find for way under $100, when they could use it to finance 18 micro-loans to desperate, motivated entrepreneurs in poor, developing countries?

Go to kiva.org and see where your conspicuous consumption can be better focused.

The firing of gaetan heroux (NOW, December 17-23, 2009) is the latest insanity to erupt from the deepening crisis at Street Health.

The managers of Neighbourhood Link and Street Health are presenting a united front on the issue, requiring all of us to suspend our disbelief while they claim Heroux’s relocation was planned, coincidental and not retribution for his support of his Street Health colleagues as they battle with the employer to get a fair first contract.

Gaetan Heroux is one of the most respected front-line workers and important anti-poverty activists in the city. We need him at Dundas and Sherbourne full-time.

We were particularly delighted that she wished for more cool book events in the coming year.

Like the justly celebrated TINARS and IFOA, Toronto Public Library is coming up with new and interesting ways to bring writers and readers together.

We’ve just opened a great new event space – the Appel Salon at the Toronto Reference Library – where we’ve presented some (if we do say so ourselves) pretty spectacular onstage interviews, with authors Douglas Coupland, Francine Prose and Antony Beevor – not to mention other cultural creators, including the fabulous soprano Measha Brueggergosman, climate change hero Tim Flannery and populist starchitect Jack Diamond.

We’ve got several interviews with literary giants in the offing. We’d love to see Cole there.