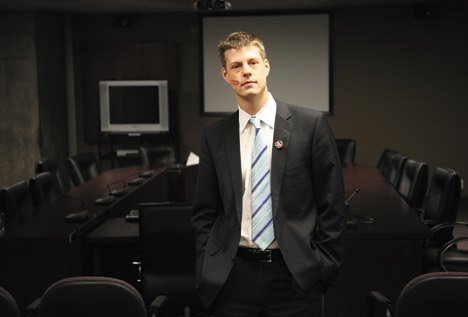 Sooo… Adam Giambrone has quit the mayoralty race (NOW, February 11-17). It’s too bad. Between his soap-opera antics and George Smitherman’s daily vacillating (cloth, disposable?), the mayor’s race was getting interesting. Giambrone’s done the right thing by quitting the race. Now he should man up, do the right thing and quit the TTC. At least that way he won’t be corrupting all those innocent people!

Mike Smith’s article It Was One Giambroglio After Another (NOW Daily Online, February 10) is dead on – as long as you ignore what actually happened.

Let’s focus on what matters: Giambrone, when caught, lied to the press. This shows obvious terrible judgment.

You need excellent judgment to be a good mayor. Giambrone doesn’t have it.

Or maybe it’s just that pickle up my ass. I guess this is what you write when your chosen candidate reveals himself to be a fool.

On behalf of the planet-wrecking industrial agriculture lobby, I would like to thank Wayne Roberts for not mentioning the role that water fluoridation plays in obesity (NOW, February 4-10).

Cargill and Archer Daniels Midland have subsidiaries that sell fluoridation chemicals and equipment to municipalities while also bottling and selling spring water that is the only natural low-fluoride alternative available.

High-fructose corn syrup and factory farm feed crops can not be produced without superphosphate fertilizers.

The cost of destroying the earth’s arable topsoil to make cheap calories is heavily subsidized by the sale of corrosive fertilizer-production scrubber waste, sold “as is” for water fluoridation.

The waste is seven to 10 times more expensive to bury legally than to sell as magic tooth medicine in tap water.

The result is the undermining of local, sustainable food, the kind that never used to make kids fat.

Apple of my iPad

Just like the rest of the media of late, Joshua Errett’s article on Apple’s iPad (NOW, February 4-10) fell in line with the fawning sheep looking for the next overhyped and overpriced gadget that’ll save their industry. This over-reliance and addiction to corporatized technology can prove fatal, as the iPod proved to be to the now-beleaguered music recording business.

Are we really going to put our faith in the same company that gave us the US Festivals in the 80s and the almost forgotten Newton product 20 years ago?

iPad? iPass, thank you very much.

Shawn Patrick Stensil Is Exactly Right (NOW, January 28-February 3) that we should replace the Pickering B nuclear reactor with green energy. It goes without saying that all functioning reactors release radioactive material on a routine basis, and that every exposure increases our risk of cancer.

But it’s also crucial to remember that the nuclear system is a major source of greenhouse gas emissions.

In a landmark article published in November 2009, Scientific American reports: “Nuclear power results in up to 25 times more carbon emissions than wind energy, when reactor construction and uranium refining and transport are considered.”

If we’re serious about reducing climate change, not to mention cancer risks, one of the answers is properly sited wind turbines.

Canadian Association of Physicians for the Environment

The Rocco Rossi love-in in the Star (NOW Daily Online, February 4) is an illusion. The Star has pretty much already endorsed George Smitherman. That is apparent in that they did a poll they knew would show him well in the lead. And the poll was done in January, when polls are irrelevant, to help cement that lead. Playing up Rossi is a move to create a Smitherman-versus-Rossi race.

A sign of things to come? Early in the Toronto Centre campaign (NOW Daily Online, February 8), I sent in two questions to Liberal candidate Glen Murray. No one bothered to get back to me, even to acknowledge them, never mind answer.

As someone who has spent years working for elected politicians, I well know how important it is to respond to constituents.

And I won’t vote for someone who doesn’t demonstrate this most basic commitment to communication, especially if he’s running to be elected for the governing party.