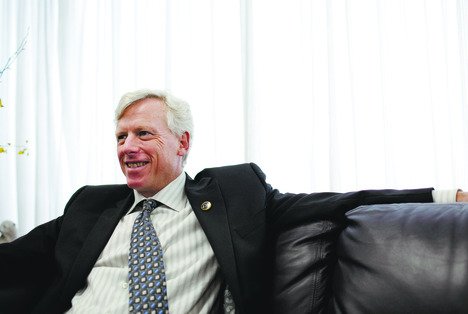 Mayor David Miller’s article on the budget (NOW, March 4-10) was an adroit demonstration of how flexible he sees himself as being in his approach to the city’s finances.

Miller’s idea of financial management has been to spend as much as possible on what, in his opinion, is worthwhile and tar all those with opposing views as liars. He dragged out the old chestnut yet again about Harris’s downloading. Okay, so he doesn’t like it.

It’s reality, and the city needs to manage its finances to deal with it. Yes, negotiate with other governments, but don’t set our budget as if the costs didn’t exist and then whine about them afterward.

Mayor Miller has managed our finances to meet his own agenda, one we residents cannot afford and many of us do not support.

Despite Mr. Miller’s dubious efforts to “put the lies to rest,” the truth is that most people would not claim the city is in better shape than when he was elected.

Since his election, the mayor has increased staff, and property taxes have gone up faster than inflation.

Mayor Miller would like to take credit for his environmental initiatives, and in this area he deserves some recognition. Yet the city has failed to meet its waste diversion targets. The mayor invites the public to judge his record. They did. That’s why after he caved in to the unions in last year’s strike he got low approval ratings.

You know what? Screw you, NOW, Susan G. Cole and her piece on the Vancouver Olympics (NOW, March 4-10). There is nothing wrong with this display of patriotism. It is deserved and healthy.

Yes, the celebration at Yonge and Dundas was a white event, but, hey, white people are the ones who ski, and embrace snow, for that matter. They also play hockey, snowboard, speed skate, bobsled and curl.

I am sure the wonderful people who make up our diverse quarters will join in the “white” fluffy fun given time and economic opportunity.

As it is, let the white people have their moment. Canada is far too full of self-deprecation and no true moments of national pride. Oh, and don’t pretend that’s not what the Olympics are for.

And the French and Ontarians can stuff their complaints, too. It was nice the Irish Olympic organizer even tried to utter some French. Shame on you for complaining.

Of Olympics and eugenics

Thank you, Susan G. Cole and Mike Smith both, for bringing some sober balance to the discussion about the Olympics. I thought I was alone.

What is most troubling about the Olympics as a whole is the massive material and cognitive energy put into developing physically perfect beings (where have we heard that initiative before?) while billions on earth do not enjoy even average health (or life expectancy).

I don’t doubt that some of the research aimed at making athletes more perfect also happens to produce findings that might help those who are below average health-wise.

But I doubt that would be enough to vindicate the existence of the Olympics.

I will no longer be reading Joshua Errett’s columns in NOW. His treatment of filmmaker Kevin Smith (NOW, March 4-10) was downright cruel. I know Smith may have seemed like an easy target after the Southwest Airlines fiasco, but “incessant whining and self-promotion” is taking it too far.

Smith is not a shameless self-promoter. Smith’s weight has been an ongoing battle in his life, and your opening statements are a testament to how people with weight issues are discriminated against.

Smith didn’t do this for publicity. He tweeted his frustrations because they were completely founded!

Have you ever been singled out for your weight and humiliated in public? I can’t think of a worse scenario.

Frankly, I hope voices like yours get drowned out, you judgmental, self-serving, skinny fuck.

One major jerk too many

I have a strong sense that I have been on a date with one of the guys mentioned in Ashley Botting’s article on online dating, The Goodbye Girl (NOW, March 4-10). I hope only one major jerk like him exists.

B’nai Brith Canada has been releasing its Audit Of Anti-Semitic Incidents for 28 years, and our “perspective on what constitutes anti-Semitism” (NOW Daily Online, February 26) has been consistent throughout. The fact that more incidents revolving around Israel now make their way into the Audit is a sign of the times.

However, anti-Israel incidents are only included when there is a clear anti-Jewish component.

The incident definition framework used in the Audit is the same as that used by organizations all over the world, including both the U.S.-based Anti-Defamation League (ADL) and the UK-based Community Security Trust (CST).

This data has been reviewed and incorporated by institutions such as the Organization for Security and Cooperation in Europe (OSCE), the U.S. State Department and the United Nations Commission on Human Rights as the authoritative source for information on anti-Semitism in Canada.

By my count, approximately 66 per cent of the column inches in your Green Issue (NOW, February 25-March 3) were dedicated to advertising, 14 per cent to boilerplate event and concert listings, 10 per cent to photos and graphics and a whopping 10 per cent to actual original written material. This seems to me the epitome of the excess we as consumers are constantly told to eschew.

While some readers might find some value in some of the ads, I expect most are like me. We breeze through the content in a few minutes and toss this mass of newsprint in the recycling bin.

To be considered anything but hypocritical, your number-one green idea should have been: “Read NOW online.”