Lisa MacLeod: how much longer for Doug Ford’s noisiest minister?

With the Ontario government now facing regular crises, the PC leader may soon have to decide whether his noisiest minister is an asset or a hindrance 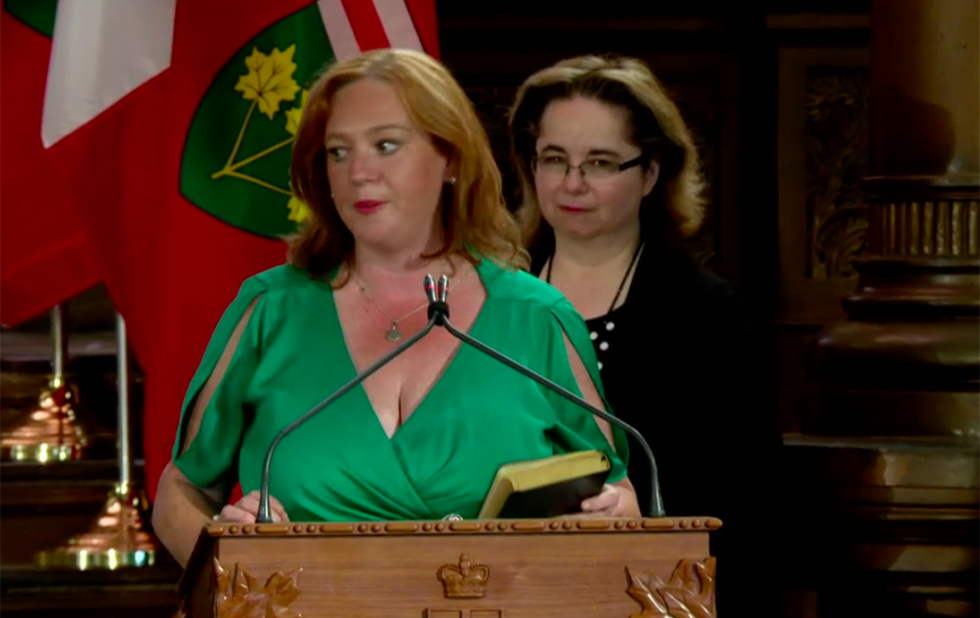 PC MPP Lisa MacLeod has made it her style to shout rather than speak her views, and then play the victim when her critics respond.

This became particularly noticeable when the author and broadcaster Gail Vaz-Oxlade called the Ford cabinet minister a “heartless c***” on Twitter last week over MacLeod’s treatment of autism parents and handling of the autism file when she was minister of Community and Social Services.

Vaz-Oxlade, a respected financial advisor who has been critical of the government’s autism cuts, was reacting to MacLeod tweeting about her daughter’s grade eight graduation.

The use of such language is wrong. It reeks of misogyny and makes opponents of the Ontario government appear crass. Moreover, it allowed MacLeod to claim martyrdom and deflect from the Ford government’s various ongoing patronage scandals, not to mention growing questions about MacLeod’s own future in cabinet.

But Vaz-Oxlade’s language is nothing compared to how the autism community has been treated by the Ford government and in particular MacLeod. More evidence of that surfaced last week.

A internal review of the program by fellow PC MPP Roman Baber leaked to the Globe suggests the Ford government misled the public about how many children with autism are on the waiting list for treatment. Now hundreds of counsellors at autism treatment centres across the province are being laid off.

My niece Katie is autistic. The commitment, love and sacrifice involved in raising a child with autism is beyond calculation. Frankly, it can break your heart.

The parents of children with autism in Ontario have tried to get politicians to hear and help them. No government has got it right. The Liberals’ plan, especially under Dalton McGuinty, was deeply flawed.

But MacLeod, who was eventually bounced from the file in the Ford government’s recent cabinet shuffle, has been singled out by parents for bullying behaviour and threats.

MacLeod warned members of the Ontario Association for Behaviour Analysis, for example, that they would face “four long years” if they didn’t support the government’s changes to the autism program. This eventually produced a semi-apology from MacLeod. But the bad behaviour has continued in her new role as Minister for Tourism, Culture and Sport.

On Friday, the Ottawa Sun reported that MacLeod marched up to Ottawa Senators owner Eugene Melnyk at the recent Rolling Stones concert and demanded, “Do you know who I am?”

MacLeod, apologized later on Twitter for “being so blunt,” but framed her outburst as simply “concerns about the state of our beloved Ottawa Senators.” That hardly describes the arrogance, vulgarity and elitist attitude expressed by MacLeod. Opposition MPPs are once again calling for MacLeod’s resignation.

MacLeod has publicly claimed to suffer from depression. I would never dream of questioning this, but others have, including former PC leader Patrick Brown. He writes in his book of MacLeod, who played a central role in Brown’s political demise: “She was just angry with everything, with everyone and with her situation in life. Members of the caucus hated her.”

Brown was, of course, a leader scorned, but it’s also true that all does seem to get personal with MacLeod’s politics. And aggression and insult are typical reactions to critics who are often perceived as “snowflakes” and “social justice warriors.”

Amid the most recent distractions, it’s easy to forget MacLeod has long entertained leadership aspirations.

As one of the longest-serving PC MPPs, she has a rural base in the party. She also has connections and friends within caucus and government, and is not a politician any leader would like to provoke by too much demotion. She was one of the first to come out in support of Ford.

But with the Ontario government now facing such regular crises, Doug Ford may soon have to decide whether his noisiest minister is an asset or a hindrance.